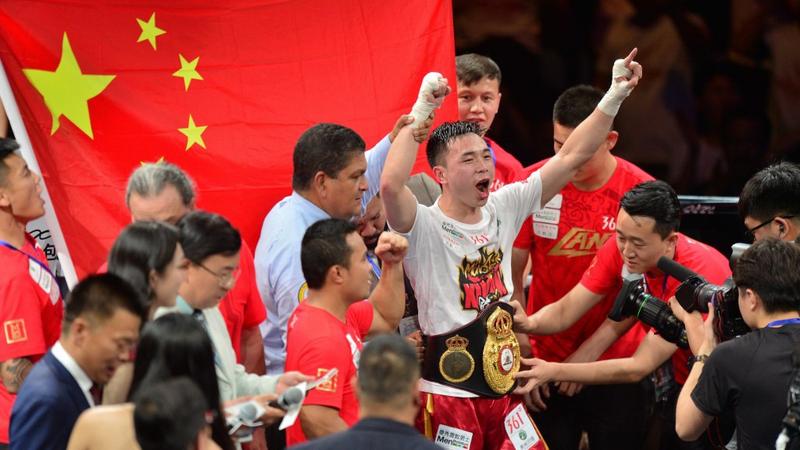 Xu Can of China celebrates after winning his WBA Featherweight boxing title bout against Shun Kubo of Japan in Fuzhou on May 26, 2019. (STR / AFP)

China’s Xu Can lived up to his “Monster” nickname by pummeling the previously unbeaten Manny Robles III of the United States in a thrilling encounter to retain his World Boxing Association featherweight title via unanimous decision in Indio, California, on Nov 23.

“I kept my promise that I made before the match, which was to keep the golden belt in China,” Xu said in a video to fans posted on Weibo after improving to 18-2 (3 KO).

“I hope the victory brings you joy. I presented you an evolved version of Xu Can, who has already become a monster. I hope you can support me as usual, and I will for sure bring more surprises to you.”

With Mexican Leo Santa Cruz moving up to super featherweight, Xu could find himself in the mix for the WBA’s elite “super” world title. American Shakur Stevenson is the division’s WBO champion, with Briton Josh Warrington the IBO champ.

The 25-year-old Xu, who hails from Fuzhou in Jiangxi province, has enjoyed a stellar year, claiming the lesser of the WBA’s two world featherweight belts by stunning Puerto Rico’s Jesus Rojas in Houston in January.

Xu won his first defense by stopping former champion Shun Kubo of Japan in six rounds in Fuzhou in May, with the bout on Nov 23 the first time a Chinese has defended a world title in the US.

He is China’s third world champion following former WBO flyweight king Zou Shiming and ex-WBC minimumweight winner Xiong Chaozhong, who were crowned at the ages of 35 and 30, respectively.

Xu fans made their presence felt with Chinese flags and banners at Fantasy Springs Resort Casino, and their fighter didn’t disappoint.

Despite making a big step up in opposition, Robles held his own admirably early on. The 25-year-old, who resides in Los Angeles, scored heavily by countering with right hands to the head.

However, by the fifth round, the momentum began to swing in Xu’s favor, as the Chinese star inflicted damage with quick-fire combinations that invariably ended with left hooks to Robles’ body.

Robles regained some composure in the 10th to land some telling blows, but it was too little, too late, as Xu withstood the barrage to edge an enthralling encounter that the lop-sided scorecards did not properly reflect.

Robles fell to 18-1 with eight wins inside the distance.

Meanwhile, in Las Vegas, home favorite Deontay Wilder floored Cuba’s Luis Ortiz in the seventh round to retain his WBC world heavyweight title and set up a lucrative rematch with Tyson Fury in February.

The 34-year-old Wilder landed a devastating right hand to end the fight and move a step closer to his goal of unifying all four heavyweight belts with an explosive finish at MGM Grand Hotel.

Unbeaten in 43 fights (42-0-1, 41 KO) and widely regarded as the most destructive puncher in the heavyweight division, the ‘Bronze Bomber’ recorded his 10th straight title defense, joining Muhammad Ali who did it between 1974 and 1978.

Wilder waited patiently for his big moment, and when it came late in the seventh it was stunning. He followed a jab with a crushing straight right that sent Ortiz crashing to the canvas.

Ortiz eventually hauled himself up but clearly could not continue. The fight was officially stopped at 2:51 in the seventh.

This was a rematch of their 2018 fight where Wilder battled through adversity to deliver a 10th-round stoppage.

“My intellect is very high in the ring and no one gives me credit,” Wilder said. “I think I buzzed him with a left hook earlier in the round and I took it from there.”

Ortiz (31-2) didn’t protest the ending, but said he thought he beat the count.

“I was clear-headed when I hit the canvas,” he said. “When I heard the referee say seven I was trying to get up, but I guess the count went a little quicker than I thought.”

Wilder made at least US$3 million for the fight, but figures to make much more when he and Fury meet in a Feb 22 rematch of their fight a year ago that ended in a disputed draw.

His win helped clarify the top of the heavyweight division, though, which will be sorted out further when Anthony Joshua and Andy Ruiz Jr. meet on Dec 7 in their title rematch in Saudi Arabia.

“Next we have Tyson Fury in the rematch,” Wilder said. “Then I want unification. I want one champion, one face and one heavyweight champion — Deontay Wilder.

“The heavyweight division is too small to have so many belts lingering around. It should be just be one champion, and I think I’m the perfect man for that job.”

The last two years in heavyweight boxing have provided plenty of rousing matchups and renewed enthusiasm, in contrast to the previous 15 years or so that were dominated by the Klitschko brothers, Wladimir and Vitali.

The 40-year-old Ortiz, who was coming off three straight wins, was trying to become the first Cuban to win the world heavyweight title. “It was a war,” he said. “I told everyone it wasn’t going to go 12 rounds.”