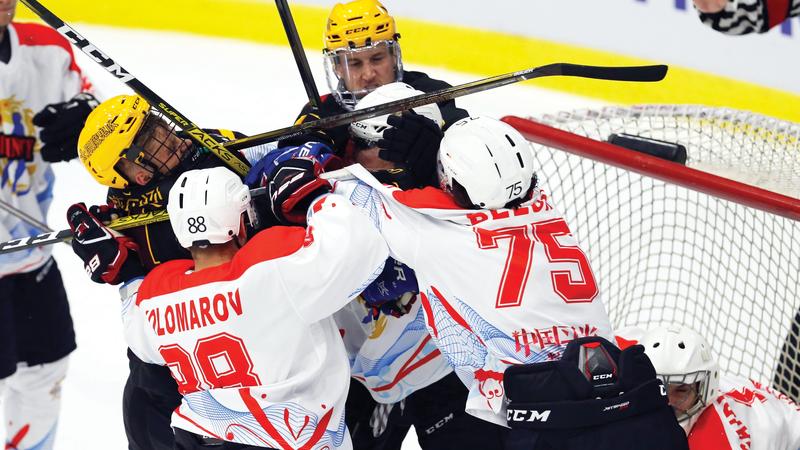 Despite a lack of talent and facilities, China’s hockey governing body is looking to its long-awaited domestic league to bolster the national program ahead of the challenge of the home Olympics.

Four years into preparations for the 2022 Winter Games, China’s commitment to propel hockey into the national sports mainstream still looks like a long shot, underlined by the launch of a domestic league forced to include overseas teams to make up for the dearth of homegrown talent.

The “league”, literally a three-stop tournament, opened its first leg in Beijing on Aug 2 with five teams, including the Arizona State University Sun Devils from the United States and Ermak Angarsk from Russia’s second tier VHL. The Chinese entries are Jilin Tsen Tou and KRS-ORG from the VHL, and Kunlun Red Star from Russia’s top-tier Kontinental Hockey League.

The NHL is building a stronger presence here (in China) and a lot of North American coaches have come to help. Seeing such high-level hockey from countries all over the world will make the game explode here

They were competing in a round-robin format through Aug 7 at northeast Beijing’s Aozhong Ice Sports Center.

The Chinese Ice Hockey Association revealed that the second and third legs of the competition will be held in March after the Russian leagues’ regular seasons, with more domestic clubs participating.

To put things in perspective, perennial national champions Harbin and Qiqihar, from China’s strong winter sports province Heilongjiang, skipped the first stop in order to compete in the U19 tournament at the China Youth Games in Shanxi province.

To be competitive in the world’s fastest team sport, which has long been dominated by Canada, Russia and teams from Scandinavia, China needs to build a domestic league system from scratch, said Si Liang, deputy secretary-general of CIHA.

“It’s better late than never ... even though we have to launch it in a shorthanded and hasty situation,” Si told China Daily at Aozhong Ice Sports Center on Aug 2.

“As host, trying to pull off a respectable showing at the 2022 Olympics means we are in urgent need of more elite-level hockey competitions on a consistent basis, rather than just the annual national championships, to develop our players and help them gain more experience.”

Having qualified for the men’s and women’s Olympic tournaments by special permission from the International Ice Hockey Federation, China is pursuing a tall task to contend for a medal in the 10-team women’s competition and not be embarrassed in the 12-squad men’s event.

China’s women are currently ranked No 20 by the IIHF, while the men are No 32.

Although China is ambitiously promoting snow and ice sports among 300 million people in the buildup to 2022, its stagnant player development in hockey has pushed the host to take bold moves, such as recruiting North Americans with Chinese heritage to the national program.

The six-team national championships’ Group A tournament in June for the first time included an extra team from Beijing consisting of several foreign-born players of Chinese ancestry.

The Sun Devils, who compete in Div 1 of the NCAA, are happy to play a role in the sport’s potential rise in the world’s most populous country.

“I think the more presence North American hockey can have over here, the quicker hockey will grow here. It helps a lot,” Arizona head coach Greg Powers said following a 5-3 win over Kunlun Red Star in the league opener on Aug 2.

“The NHL is building a stronger presence here and a lot of North American coaches have come to help. Seeing such high-level hockey from countries all over the world will make the game explode here.”

The Sun Devils’ appearance in the Chinese league marks the first visit by an NCAA Div 1 hockey team since 1985.

Elevated to D1 status in 2015, ASU made it to the 16-strong US national championships for the first time last year before bowing out in the opening round. The team is counting on the Beijing tournament to facilitate a deeper run next season.

“This tournament is a huge advantage for us. The ability to practice and play against professionals should really benefit us when our regular season starts,” said Powers.

ASU freshman Peter Zhong had the opportunity to don the Devils’ maroon and gold for the first time against Red Star at the rink 10 minutes from where he grew up.

Born and raised in the Chinese capital, Zhong is one of just three NCAA D1 players from China. The other two are Song Andong, who was drafted 172nd by the NHL’s New York Islanders in 2015 and now plays for Cornell University, and Chen Zimeng, Song’s U18 national teammate and a freshman with Alabama-Huntsville.

“I started out pretty nervous,” said Zhong, 21, who developed his game in Chicago’s junior program. “The competitive atmosphere was so intense, but I enjoyed it a lot.

“The pace and speed of professional hockey is tough, but I am keen on growing my game through the collegiate system in the US to hopefully suit up for China at the 2022 Olympics.”