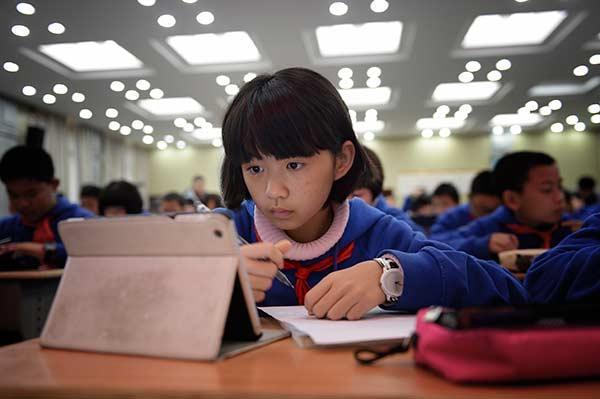 A student learns from an online open course in a middle school in Changsha, Hunan province. (PHOTO / CHINA DAILY)

In October 2016, Shanghai resident Song Yujiao, 34, a procurement manager at a pharmaceutical company and mother of You Zhenyu, 4, decided to do what millions of others of her ilk have been doing of late - she booked an expensive cross-border online education course for her brat.

Initially, she was skeptical if the English-language program would be effective. The male teacher, Matthew Privette, 27, was based thousands of miles away in South Carolina. The online course, offered by VIPkid, is received on Song's 15-inch laptop.

Would a mix of live streaming 25 minutes a day and offline videos on a little screen keep her son engrossed even for five minutes? When she is away for work, would he learn without supervision? Thus she used to wonder. Not anymore. You is no longer a little devil either.

He can't wait to flaunt his Halloween costume to his English teacher on screen. He wants to learn the language even on holidays.

"I travel often. Unlike other parents, I hardly have the time to pick up my son from classes. So, the online class saves a lot of trouble. I can also check the quality of the class using the replay feature of the video format," Song said.

For young Chinese parents such as Song, technology in the form of cross-border online educational services is proving to be a blessing, complementing financial means.

According to the China Internet Network Information Center, there were 144 million Chinese users of such services by June-end, including 6.62 million who registered this year.

The rapidly growing segment has three streams: the K12 education system that children from kindergarten age to 12-year-old can pursue; vocational education; and language education.

The market in China for such online education is growing by 20 percent every year. Last year, revenue reached 156 billion yuan (US$23.6 billion), according to Beijing-based market consultancy iResearch. 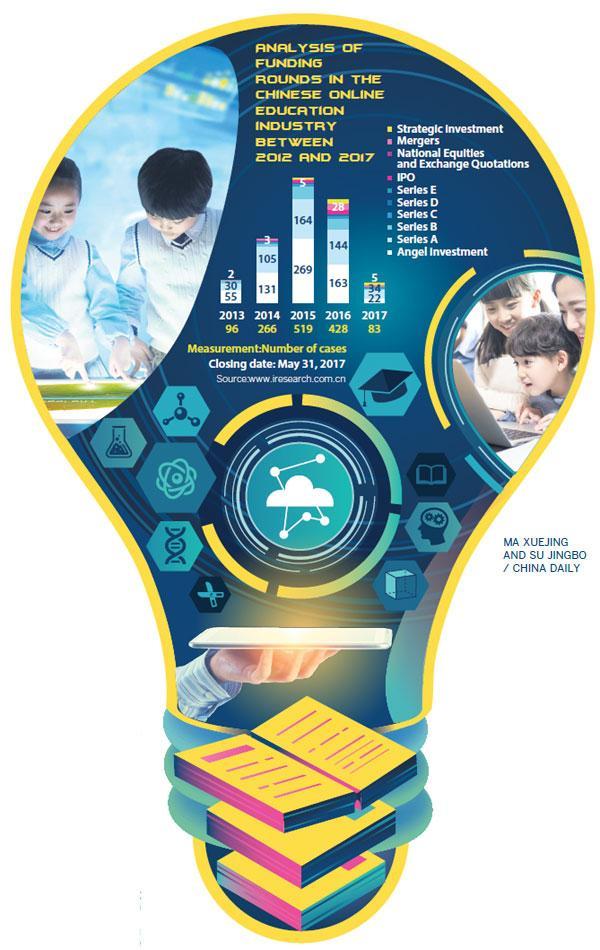 With that kind of momentum, and given Chinese parents' ample budgets for children's education, total market value is expected to reach 269.3 billion yuan in 2019.

According to HSBC's 2017 Global Education Survey, Chinese parents spend US$42,892 on their children's education from primary school to high school, over a period of 12 years, which is much higher than that in Australia, the United Kingdom and France.

Chinese parents also have the richest educational reserve as 55 percent of them pay their children's education fees from savings, investments or insurance returns.

Given the uptrend and business growth prospects, market forces are coming into play swiftly. Despite a downtrend this year, investors are sustaining financial backing for ventures that offer online education.

According to iResearch, 83 rounds of funding were recorded in the online education market during the first five months of 2017, which brought in 4.95 billion yuan, down 39 percent year-on-year.

The full-year figure is expected to be lower than the 519 rounds of funding in 2015, and down by more than half from 176 last year.

Du Miaomiao, senior analyst with iResearch, said, "The market has witnessed much investment over the past three years. Now, the investment bubble has been squeezed out. Investors have become more conservative."

"This shows that the market is consolidating after heavy investments over the past three years," said Du. "Industry leaders have started to extend their product lines via mergers. They are also integrating the value chain by making strategic investments in other companies."

Vocational education has registered the highest 37.8 percent annual growth rate in terms of funding received so far this year. Du said it is mainly because of the large number of users and their increasing willingness to learn and pay for what they are taught.

For instance, Su Bo, 32, has been working in a property company in Nantong, Jiangsu province, for seven years. In September, he registered for an online course in engineer supervision in the hope of qualifying for a job promotion and raise.

"Online courses make it possible for working staff like me to study during our spare time via live streaming and offline videos," he said.

With the advancement in artificial intelligence, online education will see bigger room for development, she said. For example, virtual teachers, and automated yet interactive programs might become the order of the day.

Yu Minhong, CEO of New Oriental Education and Technology Group, said at a forum in early October in Beijing that one-third of AI applications in the future will be in education.

"Education will be one of the fastest-growing industries and worthy of investment in this age of AI," he said.

A number of Chinese companies have already started mapping their future moves in the AI-backed education sector, including Shanghai-based Yixue Education Technology and leading Chinese AI voice technology supplier iFlytek, which is based in Hefei, Anhui province.

It's not roses all the way though. Thorns in the form of challenges are beginning to cause concern to the market.

For one, finding adequate number of qualified teachers is not easy. The Ministry of Education forbids teachers working at primary schools and middle schools from offering paid lectures after school hours. For another, there are no well-defined regulations in place yet.

Cost is another major challenge. According to He Qiang, founder of online tutorial service provider Sanhao.com, a large number of online education firms face a high cost of acquiring a customer, which is between 3,000 yuan and 10,000 yuan.

"If such firms cannot control the quality of their classroom, they wouldn't be able to recover their cost in a very long time," he said.