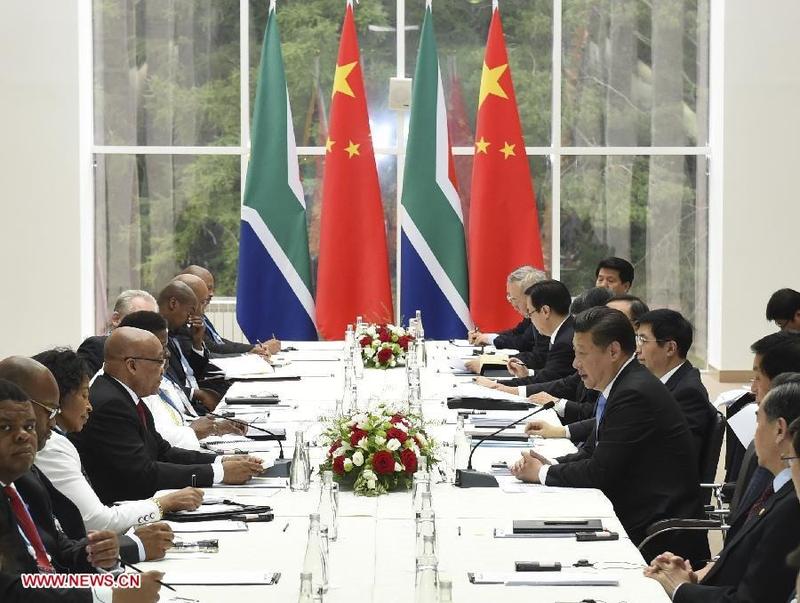 JOHANNESBURG - Chinese President Xi Jinping's upcoming state visit to South Africa, where he will also attend the 10th BRICS Summit, is an opportunity for the two nations to deepen and consolidate their ties.

According to Chinese Ambassador to South Africa Lin Songtian, the relationship between China and South Africa has become a "role model" for China's cooperation with other African and developing countries.

In the previous two decades, the relationship has grown in strategic significance.

China has for nine years in a row been South Africa's largest trading partner. In 2017 bilateral trade grew by 11.7 percent to US$39.17 billion, a more than 20-fold increase from the figure at the beginning of diplomatic relations

South Africa has sought to advance the China-Africa partnership by continuing to co-chair the Forum on China-Africa Cooperation (FOCAC), and working toward the implementation of the outcomes of the 2015 FOCAC Johannesburg Summit.

Relations between the two countries have been growing, Daniel Bradlow, a professor of international development law and African economic relations at University of Pretoria, told Xinhua.

ALSO READ: Nations 'supported, learned from each other'

South Africa needs to be thinking how it can further strengthen the relationship as "a gateway to Africa for China as well as for other countries," he added.

In a commentary published in April in South African daily Pretoria News, the Chinese ambassador said trade and investment between the two countries have grown immensely.

"China has for nine years in a row been South Africa's largest trading partner. In 2017 bilateral trade grew by 11.7 percent to US$39.17 billion, a more than 20-fold increase from the figure at the beginning of diplomatic relations," Lin said in the article.

"South Africa has been China's largest trading partner in Africa for eight consecutive years, accounting for a quarter to a third of China-Africa overall trade," he noted.

According to the Chinese diplomat, last year South Africa became the first country in the continent to export beef to China. The two nations are strategic partners in many fields, including trade, mining, manufacturing, finance and commerce.

This year marks the 20th anniversary of the establishment of diplomatic relations between the two countries.

"The South Africa-China diplomatic relations have reached a milestone. China has become a vibrant and important partner for our country's development," said Manelisi Genge, chief director of East Asia and Oceania at South Africa's Department of International Relations and Cooperation.

In May, a South African delegation led by Deputy Minister of Trade and Industry Bulelani Magwanishe traveled to Shanghai, where roadshow and workshops were held on SEZ investment opportunities and incentives.

China is the strongest partner for building South Africa into the tourism hub of the world ... South Africa hosts the largest number of Chinese tourists in Africa

South Africa has also sent many of its SEZ and supporting sector specialists to China to learn about the Chinese experience.

People-to-people relations between the two countries were boosted in April 2017 when a South Africa-China high-level mechanism was launched in Pretoria.

Genge said the South African government wants to strengthen exchanges in all sectors, including academia and civil society.

"We have hundreds of students in China. Sending these students is an investment for us. We expect them to learn business acumen, the culture of doing business and competence," he said.

Tourism is another major sector where the two countries could do more together.

"China is the strongest partner for building South Africa into the tourism hub of the world," Lin wrote in his commentary. "It is estimated that tourism expenditure from China will reach US$429 billion by 2021. South Africa hosts the largest number of Chinese tourists in Africa. Last year, only about 100,000 Chinese tourists visited but the potential is huge. In the next five years, over 650 million Chinese tourists will travel abroad."

"We hope that, through joint efforts, we will attract more Chinese tourists to South Africa," he added.

While relations between the two countries have strengthened, more still needs to be done to fully realize the potential of the bilateral partnership, according to Kobus van der Wath, managing director of The Beijing Axis, an international advisory and procurement firm.

"The opportunities are not fully appreciated in South Africa ... South Africa needs to tap the huge and dynamic Chinese market," he added.