Trump confirms Mnuchin to travel to China for trade talks 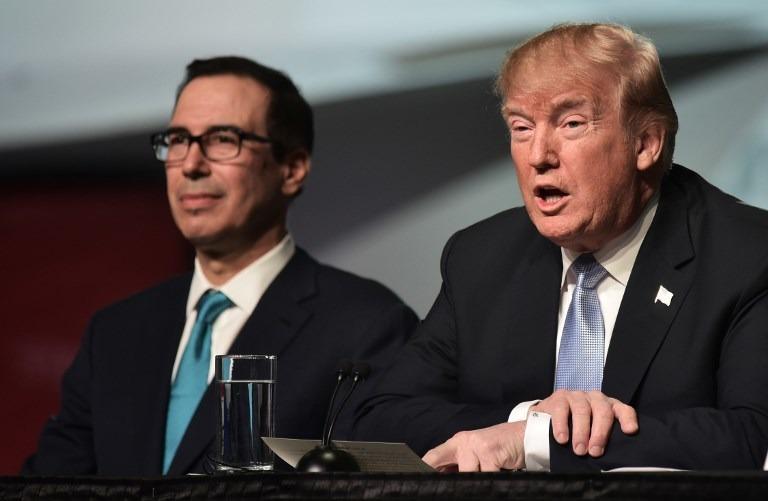 In this photo taken on March 14, 2018, US President Donald Trump speaks as US Secretary of the Treasury Steven Mnuchin looks on during a tour of the Boeing Company in St. Louis, Missouri. (MANDEL NGAN / AFP)

Trump said during a White House news conference with French President Emmanuel Macron that Mnuchin will be going to China "in a few days to negotiate on trade." Trump said the US and China are "very serious" and reiterated his plans to impose tariffs of up to US$100 billion more on Chinese goods.

"We've put on very substantial tariffs, and that will continue unless we make a trade deal. I think we've got a very good chance of making a deal," Trump said.

The United States and China have moved to the brink of the most consequential trade dispute since World War II. Both countries have proposed tariffs of US$50 billion on each other's products; Trump is looking to impose tariffs up to US$100 billion more on Chinese goods.

Mnuchin has expressed optimism that the countries could avoid a trade war. He met last week with financial officials from China, Japan and Europe.

READ MORE: Aimed at China, US tariffs are hitting closer to home

And in a sign of progress, Chinese President Xi Jinping vowed earlier this month to open China's market wider to foreign companies, raising hopes the dispute with Washington could be resolved.

The Commerce Ministry in Beijing said last weekend that China would welcome a visit from the US to discuss trade issues.