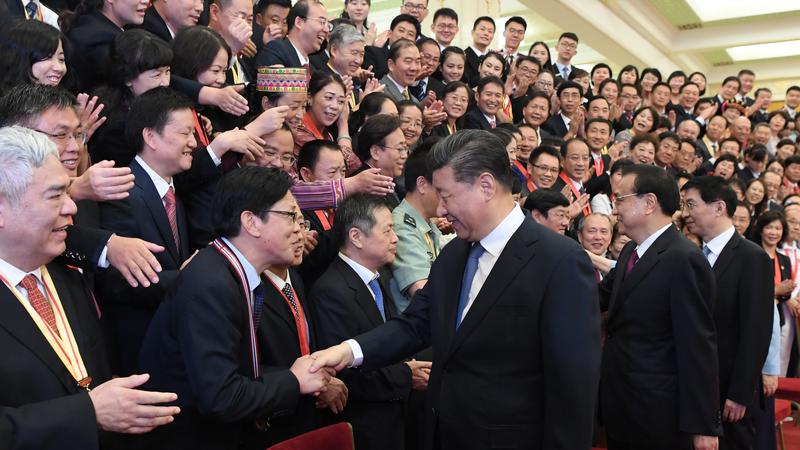 President Xi Jinping, Premier Li Keqiang and Wang Huning, a member of the Standing Committee of the Political Bureau of the CPC Central Committee, meet representatives of education workers and groups at the Great Hall of the People in Beijing on Sept 9, 2019, Teachers' Day. (SHEN HONG / XINHUA)

Xi, also general secretary of the Communist Party of China Central Committee and chairman of the Central Military Commission, expressed his greetings while meeting with representatives of education workers and groups given awards by the government at the Great Hall of the People in Beijing.

Xi shook hands with the representatives, talked with them and took a photo with them. He congratulated them on their award.

In January 1985, the National People's Congress Standing Committee, the top legislature, adopted a bill to designate Sept 10 as Teachers' Day to honor education workers for their contributions to the country's development.

Vice-Premier Sun Chunlan said at the meeting that teachers nationwide have made great contributions to the country's progress and development in the 70 years since the founding of the People's Republic of China.

Teachers should remember Xi's instructions and nurture a new generation of capable young people who have good, all-around moral, intellectual, physical and aesthetical grounding and are well prepared to join the socialist cause, Sun said.

The president has paid great attention to education work and expressed respect for the country's teachers many times through different channels including meetings, inspection tours and letters.

In a speech delivered on Sept 10 last year, Xi reaffirmed the great importance of education and called for more respect for teachers and stronger efforts to enhance education.

In September 2016, Xi visited Beijing Bayi School, his alma mater, where he talked with the teachers and expressed his appreciation to the country's educators for their hard work. He urged more measures to narrow the gap in educational resources and quality between rural and urban areas.

While inspecting the University of Science and Technology of China, in Hefei, Anhui province, in April 2016, Xi encouraged teachers to cultivate a greater sense of mission and aim for more achievements in science and technological research.

In a letter of reply to teachers from Guizhou province in September 2015, Xi encouraged the country's teachers to contribute more to education in poor areas. Providing rural children with a good education is an important task in poverty relief, he said.

While inspecting Beijing Normal University in September 2014, Xi said teachers are dream builders. To become a good teacher, one must have lofty ideals, solid knowledge and a kind heart, he said.