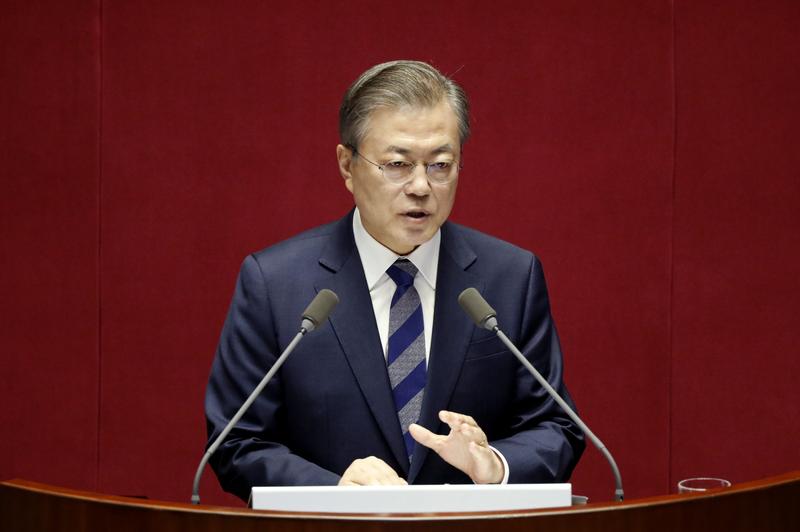 President Moon Jae-in of the Republic of Korea (ROK) delivers his speech on the government's 2019 budget proposal during a plenary session at the National Assembly in Seoul, Nov 1, 2018. Moon said Thursday that leader of the Democratic People’s Republic of Korea (DPRK) Kim Jong-un will “soon” visit Seoul. (KIM HONG-JI/POOL PHOTO VIA AP)

SEOUL — The Republic of Korea’s President Moon Jae-in said Thursday that the Democratic People’s Republic of Korea (DPRK) leader Kim Jong-un will "soon" visit Seoul as part of a flurry of high-profile diplomacy.

The announcement came as ROK and DPRK stopped all hostile acts in border area as agreed upon in the military agreement, signed by defense chiefs of the two Koreas during the Pyongyang summit in September, according to Seoul's defense ministry.

During a speech before parliament, Moon said that a second DPRK-US summit is "near at hand". Moon also said he expected Kim to visit Russia soon and that Kim may meet with Japanese Prime Minister Shinzo Abe.

If Kim Jong-un, a third-generation hereditary leader, visits Seoul, he would be the first DPRK leader to cross the border into the ROK since the war's end

Moon has previously said that Kim told him he would visit Seoul within this year when the leaders met in Pyongyang in September. ROK presidential office said later Thursday that it had nothing to add to Moon's speech about Kim's trip. His comments were in line with previous statements, the Blue House said. They suggest that Moon is determined to push ahead with diplomacy to resolve the nuclear issue.

"Now, based on firm trust among one another, South and North Korea and the United States will achieve complete denuclearization and lasting peace of the Korean Peninsula," Moon said. "This is an opportunity that has come like a miracle. It's something that we should never miss."

The ROK is also referred to as South Korea while the DPRK, North Korea.

The prospects for a second summit between Kim and President Donald Trump improved after US Secretary of State Mike Pompeo made his fourth visit to Pyongyang earlier in October. But no breakthrough has followed.

US officials have recently said a second Trump-Kim summit will likely happen early next year. Some experts have raised doubts over whether Kim's Seoul trip would be realized by December.

Seoul's defense ministry said in a press release earlier in the day that the military authorities of the two Koreas would stop all hostile acts against each other on land, in waters and the air as of 12 am local time Thursday (1500 GMT Wednesday) in accordance with the comprehensive military agreement signed on Sept 19 in Pyongyang, on the sidelines of the third summit between Moon Jae-in and Kim.

Under the agreement, the two sides would stop the live-fire artillery drills and the field maneuvering exercises by regiment or bigger units within the 5-km border areas from the military demarcation line (MDL) dividing the Korean Peninsula.

The operation of drones, helicopters and other aircraft would be banned over the border areas up to 40 km away from the MDL.

The live-fire coastline artillery drills and the maritime maneuvering exercises would be prohibited in maritime buffer zones in the eastern and western waters.

The Seoul ministry said the DPRK side officially expressed its willingness to implement the military agreement during the general-grade military talks on Oct 26.

The DPRK military was implementing the agreement given the recent closure of coastline artilleries in the western waters, according to the Seoul ministry.

Stopping all hostile acts would become an effective action to defuse military tensions and build trust between the two Koreas, and become a meaningful step toward the denuclearization of the Korean Peninsula and the settlement of lasting peace, the ministry added.