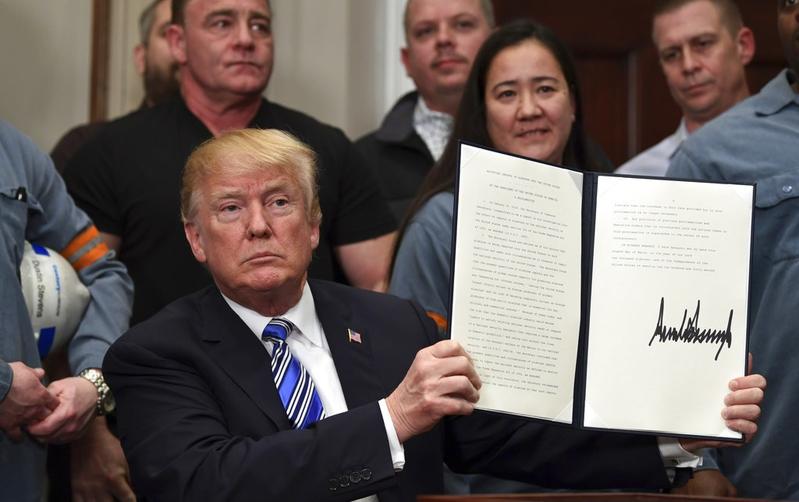 US President Donald Trump holds up a proclamation on aluminum during an event in the Roosevelt Room of the White House in Washington, March 8, 2018. He also signed one for steel. (SUSAN WALSH / AP)

The statement came after the US President Donald Trump signed proclamations to impose steep tariffs on imported steel and aluminum amid mounting dissent from business groups and trading partners around the world.

China’s Ministry of Commerce said China would assess any damage caused by the US move and “firmly defend its legitimate rights and interests”. It urged the United States to withdraw the measures as quickly as possible.

The tarrifs were based on national security grounds, but the majority of steel and aluminum was for civilian use, said Wang Hejun, a senior official at China's Ministry of Commerce.

Abuse of the clauses on national security would damage the World Trade Organization and other multilateral trade system, Wang said, adding, China will take measures to defend its legitimate rights and interests.

China urges the United States to respect the multilateral trade system and revoke the policy as soon as possible, Wang said.

The China Iron and Steel Association (CISA) and China Nonferrous Metals Industry Association issued separate statements on Friday, stating their opposition to the US tariffs plan.
READ MORE: China calls for US restraint on trade protectionism

“The China Iron & Steel Association appeals for the Chinese government to take resolute measures against imports of some US products including stainless steel, galvanized sheet, seamless pipe, coal, agriculture products and electronic products,” the industry body said in a statement on its website.

“Trump’s behavior is a challenge to the global steel industry and will definitely encounter opposition from more countries,” CISA added.

The United States will impose a 25-percent tariff on imported steel and 10-percent on aluminum, Trump said at an event at the White House, noting a strong steel and aluminum industry is "vital to our national security."

The tariffs will take effect in 15 days with initial exemptions for Canada and Mexico pending the renegotiation of the North American Free Trade Agreement (NAFTA).
"We're going to hold off the tariff on those two countries, to see whether or not we're able to make the deal on NAFTA," Trump said.
Trump signaled that all other countries also have opportunities to be exempt from the tariffs by negotiations with the United States.
"If the same goals can be accomplished by other means, America will remain open to modifying or removing the tariffs for individual nations, as long as we can agree on a way to ensure that their products no longer threaten our security," he said.
Several major trading partners have said they might respond to the tariffs with direct action.

European Union Trade Commissioner Cecilia Malmstrom said: "The EU is a close ally of the US and we continue to be of the view that the EU should be excluded from these measures. I will seek more clarity on this issue in the days to come."

Japanese Foreign Minister Taro Kono said in a statement on Friday the US' decision to impose tariffs on steel and aluminium was "regrettable" and will likely have a "big impact" on economic ties between Japan and the US.
Chief Cabinet Secretary Yoshihide Suga said at a press conference in Tokyo that Japan would continue to ask the US to exempt it from Washington's plan to impose tariffs.

Japan and the Republic of Korea (ROK) said they would seek exceptions, as did Australia.

Prime Minister Malcolm Turnbull sounded confident of getting favourable treatment as Trump spoke of Washington's strong relationship with Australia, a major exporter of iron ore but that exports little steel and the United States was not a major customer.

An ROK official said the tariffs would impact the renegotiation of the bilateral free trade deal with the US that is currently underway. ROK's trade minister told local steel makers that nations should try to avoid a trade war.

The Brazilian government reacted Thursday "with great concern" to the US decision while International Monetary Fund Managing Director Christine Lagarde said on Thursday that she feared a "tit-for-tat" escalation of trade retaliation over Trump's steel and aluminum tariffs that would sap business confidence and investment. 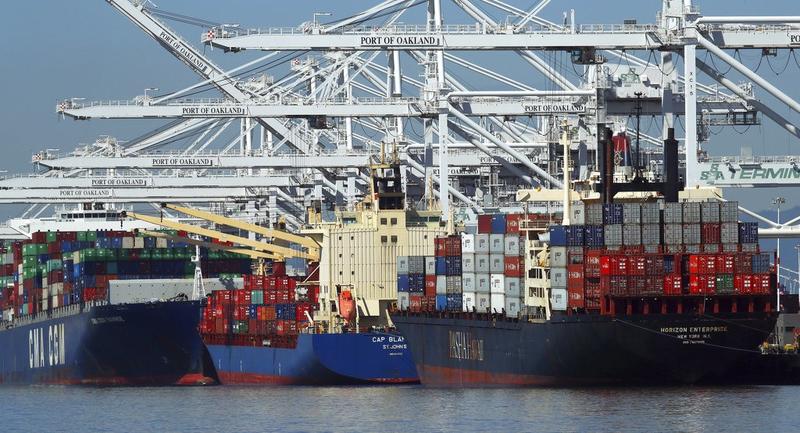 Container ships wait to be unloaded at the Port of Oakland on March 7, 2018, in Oakland, California. The US trade deficit rose in January to the highest level since October 2008, defying President Donald Trump's efforts to bring more balance to America's trade with the rest of the world, the US Commerce Department said March 7, 2018. (BEN MARGOT / AP)

While Trump argued that new tariffs would boost American steel and aluminum production, economists and business groups have warned that such tariffs could backfire and ultimately hurt the overall US economy.

Past experience has shown that such tariffs will likely raise costs for American consumers, hurt American downstream industries that use metals, and cost thousands of jobs in other manufacturing and services sectors.
A recent study by the Trade Partnership, a Washington DC-based consulting firm, also estimated that Trump's new tariffs on steel and aluminum would result in a net loss of 146,000 US jobs after accounting for positive impacts on US steel and aluminum producers.
"I disagree with this action and fear its unintended consequences," House Speaker Paul Ryan said in a statement shortly after Trump's announcement of the tariffs, urging the administration to narrow its policy.
Senate Finance Committee Chairman Orrin Hatch expressed similar concerns about the proposed tariffs, saying "this is a tax hike on American manufacturers, workers and consumers."
ALSO READ: Are we heading for US-China trade war?