China's reform moves forward in its own way

Editor's note: President Xi Jinping delivered a speech on Tuesday to mark the 40th anniversary of reform and opening-up. Eight scholars share their views with China Daily's Liu Jianna, Yao Yuxin and Pan Yixuan on how the speech points the direction of further reform in the coming decades. Excerpts follow: 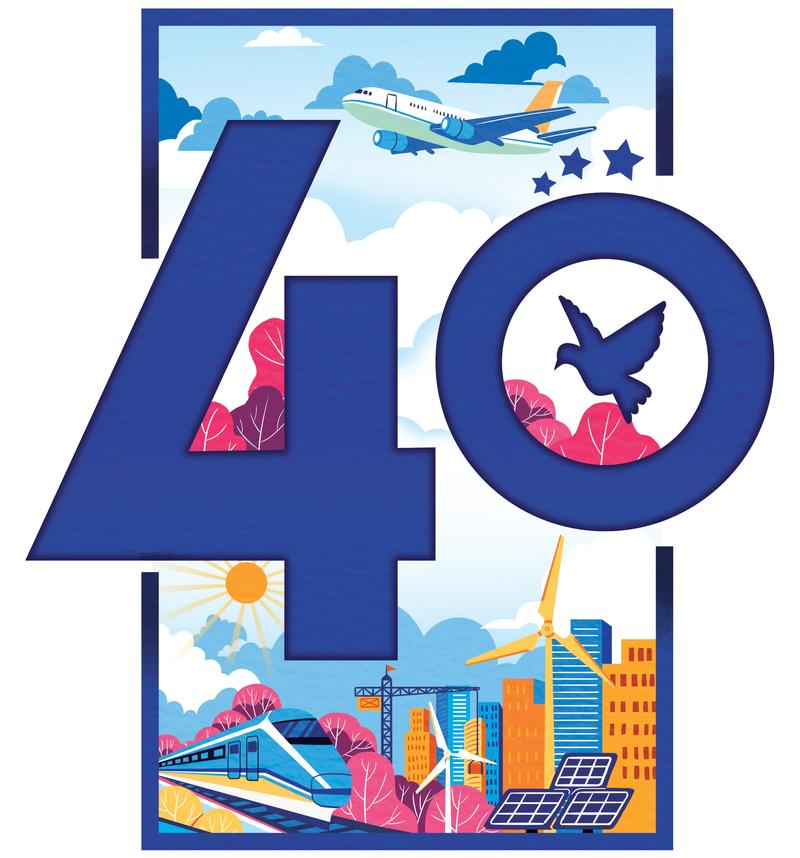 Over the past four decades, China has crossed the river by feeling the stones and embarked on a unique development path that suit its own national reality.

First, this path combines top-level design and extensive experiments at the lower level. Among which the family land contract responsibility system that emerged from 18 farmers' experiment in Xiaogang village in Anhui province is now a well-known case. Experiments at different levels and in different places have delivered successes, as well as failures, and both have provided much valuable experience to China.

Second, the Communist Party of China's strong leadership and public practices have been fully integrated. As the political guarantee and guiding force, the CPC's vigorous leadership removes the executive obstacles and ensures the smooth advancement of reform and opening-up. While the Chinese people have enthusiastically embraced the process driven both by a longing for a better life and a sense of patriotism, the cooperation between leaders and practitioners of reform and opening-up over the past decades has been effective, to say the least.

Liu Dongchao, a professor at the Department of Social and Cultural Studies, Chinese Academy of Governance

The past 40 years have seen China realizing unprecedented economic growth, as well as making breakthroughs in its relations and exchanges with the rest of the world. A number of individuals, organizations, enterprises and governments have made landmark contributions to promoting China's opening-up policy and its relations with the rest of the world. Among which 10 foreigners have been honored with China Reform Friendship Medals, showing China honors those that have made contributions to its opening-up.

That the China-proposed new type of major-country relationship, which emphasizes China's own understanding of the world, are not fully accepted by the United States and some other countries calls for some reflection by both sides. China needs to strengthen two-way communication by listening more to others and making itself understood, as well as improve its domestic governance.

In the report to the 19th National Congress of the Communist Party of China last year, as well as in his speech to mark the 40th anniversary of reform and opening-up on Tuesday, President Xi reiterated the realization of complete reunification of the Chinese nation is one of the nation's major historical tasks.

In his speech on Tuesday, Xi re-emphasized the one-China principle and 1992 Consensus, saying even a single inch of land won't be allowed to be separated from the nation, so as to realize the Chinese Dream of national rejuvenation.

Xi's remark on cross-Straits ties has three layers of meaning. First, the Chinese mainland remains committed to pushing forward cross-Straits cooperation including economic and cultural exchanges, as it is beneficial to Taiwan compatriots' livelihoods.

Second, the mainland along with Taiwan compatriots will robustly counter "Taiwan independence" forces. And eventually, Taiwan residents will realize closer and warmer cross-Straits ties will benefit compatriots on both sides.

And third, as Xi said, the mainland will share the fruits of economic growth and peaceful development with Taiwan compatriots and organizations upholding the one-China principle.

Aside from closer cooperation in industrial, economic and cultural fields, people-to-people exchanges are also flourishing. And thanks to the shared sense of national identity, a growing number of Taiwan residents have realized cross-Straits ties are a significant factor for their welfare.

As a sovereign state, China has every right to crush any attempt by any foreign power to interfere in the cross-Straits issue. More important, Beijing has the capability to take the initiative to promote reunification.

Zhu Songling, a professor at the Institute of Taiwan Studies, Beijing Union University

Analyzing the essence of reform and opening-up in his speech on Tuesday, President Xi said the two phenomena have entered a new era. As such, China should shoulder more responsibilities and share its experiences with other countries to promote mutual development.

China launched reform and opening-up to learn the salient features of economic development from advanced countries, and adapt itself to a world in transformation. Now after four decades of continuous and deepening reform and opening-up, China can offer "China solutions" to growth problems for other developing countries to consider.

China today stands at the same starting line as the West at a time when the international community is grappling with pressing problems such as a sluggish world economy, global warming and internet security. If the United States is trying to reform its immigration and medical insurance systems, the European Union aims to reform its social welfare system and Central and Eastern European countries are seeking reform partners. Reform is the new buzzword.

The Belt and Road Initiative, which embodies China's four decades of reform and opening-up experience, is a public good and platform for global cooperation. And China's independent and comprehensive industrial system will ensure the initiative leads to efficient and cost-effective cooperation.

Building a community with a shared future for mankind, too, is part of China-proposed solutions to global development problems, as it is marked by cooperation and exchanges with other countries along the Belt and Road.

Speech may become another reference point

President Xi's speech commemorating 40 years of reform and opening-up - which have made China the world's second-largest economy - represents a moment of pride for all Chinese, both inside and outside the country. Indeed, the past four decades have fundamentally changed their lives.

By helping lift about 740 million people out of poverty in the past four decades, reform and opening-up have changed China's national narrative from a "century of humiliation" in the wake of the two Opium Wars to the Chinese Dream of national rejuvenation. This unprecedented metamorphosis of the country has also transformed perceptions and policies of the international community about China, which seems to be omnipresent in global discourses.

After four decades of reform and opening-up, the Belt and Road Initiative is now making China the world's fastest growing investor. This explains why Xi's speech is being debated by experts in all the countries involved in the Belt and Road Initiative. Like his speech in January 2016 at the World Economic Forum in Davos, Switzerland, this speech, too, could become a reference point for future commentaries.

As for India, in the backdrop of the summit between President Xi and Indian Prime Minister Narendra Modi in Wuhan in April and the resetting of China-India ties that have eased mutual anxieties with regard to the Belt and Road Initiative, Xi's remark that China would not seek development "at the expense of other countries" appears very reassuring.

Also, Xi's effort to underline that "China's development does not pose a threat to any country" and that "no matter how far China develops, it will never seek hegemony" reiterates his connect with the legacies of Mao Zedong and Deng Xiaoping.

The difference is that Xi has reiterated those commitments today when China is close to the center of the global arena, spearheading new trends in globalization, influencing the evolution of global governance and decision-making, and playing a leading role in fighting climate change.

A force to reckon with thanks to reform

As President Xi Jinping aptly noted in his speech to commemorate the 40th anniversary of reform and opening-up, four decades ago there were "grain coupons, cloth coupons, meat coupons, fish coupons, tofu coupons, food ticket books, product coupons and other documents people could not be without". But fortunately, these "have been consigned to the museum of history" thanks to reform and opening-up, which the Party unleashed on Dec 18, 1978.

During this economic miracle, China transformed itself from an inward-looking agrarian society to become the world's second-largest economy and an emerging superpower. About 740 million Chinese have been lifted out of poverty. The poverty rate among the rural population has now dropped to 3.1 percent compared with 97.5 percent 40 years ago.

China has built the world's largest social security system, with basic old-age pension covering more than 900 million people and medical insurance covering 1.3 billion people. While both can be further improved, by any yardstick these are absolutely remarkable achievements. The scale of change has been unprecedented in history.

It is heartening to note that Xi called for unswerving implementation of reform, but this must be in line with the overall goal of improving the socialist welfare system with Chinese characteristics. He further noted that opening-up brings progress while closure leads to backwardness.

Noting the current rapidly evolving geopolitics and trade disputes, he observed that every step of reform and opening-up may face risks and challenges, even unimaginable tempestuous storms.

Reform and economic development have significantly raised China's cultural soft power, too, and the country is now further strengthening its ecological and environmental governance.

Asit K. Biswas, a visiting professor at the University of Glasgow, UK

The predictable criticisms against President Xi Jinping's Tuesday speech on China's ongoing reform are particularly ironic, given the political and economic turmoil sweeping the US and the EU at the moment.

Fear and jealousy of China's extraordinary economic rise obviously fuel these attacks, but the fundamental reason for them is much deeper: China can succeed only by accepting the myths of unlimited free trade, globalization and democracy according only to US standards.

It has been a passionate mantra of sacred faith in the money markets of London and New York over the past 35 years that only unregulated free markets can guarantee lasting economic growth and prosperity to any and every nation.

In fact, the turmoil currently sweeping the West makes a mockery of this: The US president's controversial policies since 2017 can only be understood in the failure of those previous norms to maintain employment and standards for the American people.

In Europe, the situation is worse: Italy, Spain, France, Germany and Britain all face enormous structural political crises and populist revolts. All the rage and anger is fueled precisely by the same neoliberal policies that the Western elites want to impose on China as well as their own long-suffering peoples.

China by contrast is following a policy of unashamedly using the power of government to regulate, monitor and tame the excesses of markets that have been regulated too little.

Economist John Maynard Keynes rejected 150 years of Western economy theory stemming from Adam Smith and David Ricardo. Keynes said government intervention in the economy is inevitable and necessary to prevent the excesses that human greed, ambition and self-interest, if left unchecked, will generate.

That is why President Xi is correct in leading China along its path of socialism with Chinese characteristics and in strengthening the ruling party's role in reform. As a huge country facing complicated situations, China needs to find the best solutions to meet the challenges it faces.

China's critics are wrong to condemn these policies. Xi's initiative should be carefully studied in the West and its successes emulated by the governments that have failed to achieve remotely as much.

Martin Sieff, a senior fellow at the American University in Moscow