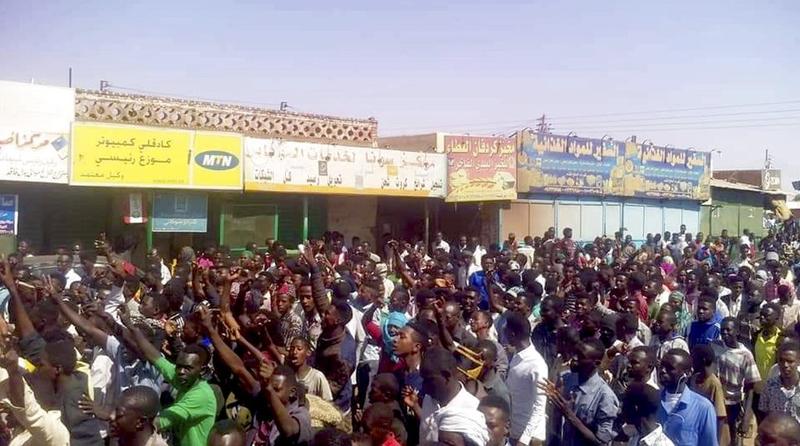 In this Dec 25, 2018 photo, people chant slogans during a demonstration in Kordofan, Sudan. (SUDANESE ACTIVIST VIA AP)

KHARTOUM — Sudanese security forces fired tear gas and stun grenades at anti-government protesters in Khartoum and other cities on Friday, the tenth day of demonstrations sparked by an economic crisis.

Protests over rising prices, shortages of basic commodities and a cash crunch erupted in the city of Atbara over a week ago and quickly spread to cities across Sudan. Authorities have shuttered schools and declared curfews and states of emergency in several regions.

Residents say police have used tear gas and sometimes live ammunition against demonstrators. Protesters have repeatedly targeted and burned the offices of President Omar al-Bashir's party and called for an end to his 29-year rule.

Earlier on Friday, security forces fired tear gas and stun grenades at 300-400 worshippers as they left a mosque near the capital Khartoum after Friday prayers, a Reuters witness said.

The group in Omdurman, across the River Nile from Khartoum, was fired upon as people exited the mosque chanting "peaceful, peaceful". Around 30 SUVs belonging to the security forces had surrounded the square outside the building before noon prayers.

Protests were also held in Khartoum and other cities including Port Sudan and Dongola, witnesses said.

According to official figures, at least 19 people have been killed, including two military personnel, but Amnesty International on Tuesday estimated the death toll to be nearly double that.

The Sudanese Congress Party, one of the opposition parties which have been calling for protests, said security forces had detained its leader Omar al-Degair on Friday.

"We affirm that the path of the December revolution will continue and will not be affected by arrest or repression," the party said in a statement.

Civil society groups said the authorities raided a meeting of opposition leaders in Khartoum on Thursday evening and arrested nine people, including members of Sudan's Communist Party and the pan-Arab Ba'ath and Nasserist parties.

Sudan has been gripped by a deep economic crisis that began in 2011 after the southern half of the country voted to secede, taking with it three-quarters of the country's oil output, and has been aggravated by years of overspending and mismanagement.

Opposition groups blame Bashir, who has governed Sudan since 1989, for the mismanagement. A series of measures, including a sharp devaluation of the Sudanese pound in October, have failed to shore up the economy.

Members of parliament this month backed a constitutional amendment to extend term limits that would have required Bashir to step down in 2020.

SUNA cited a police spokesman as saying the situation across Sudan was calm on Friday "except for some scattered gatherings in some parts of Khartoum state" which he said were dispersed professionally and without financial or human losses.

"The Government should respond to legitimate grievances of the Sudanese people," Clement Nyaletsossi Voule, who reports to the UN Human Rights Council on the right to free assembly in Sudan, said in a statement.

Aristide Nononsi, who reports to the council on human rights in Sudan, said governments had a duty to tolerate dissent.