ROK to launch joint liaison office with DPRK on Sept 14 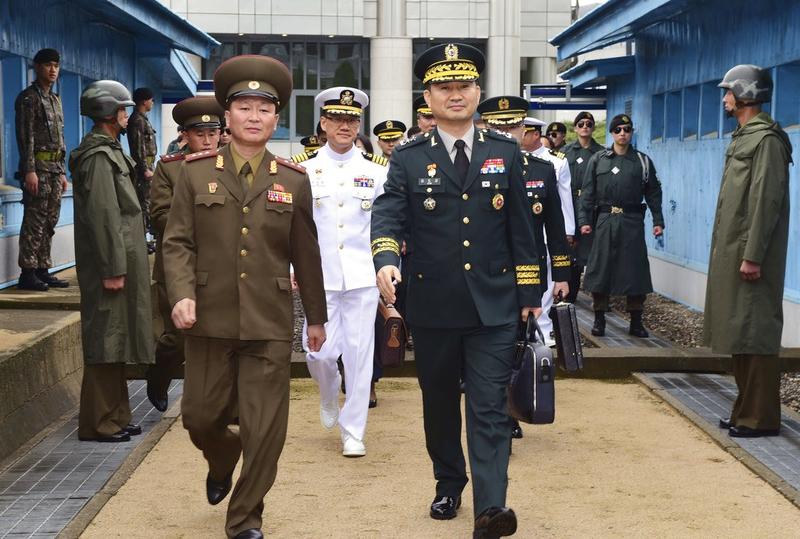 In this photo provided by the Republic of Korea's Defense Ministry, ROK Maj. Gen. Kim Do-gyun, center right, is escorted by an officer from the Democratic People's Republic of Korea (DPRK) after crossing to DPRK for the meeting at the northern side of Panmunjom in the Demilitarized Zone, DPRK, June 14, 2018. (ROK DEFENSE MINISTRY VIA AP)

An unnamed unification ministry official told local reporters that the ROK was preparing to open the joint inter-Korean liaison office at the DPRK's border town of Kaesong on Sept 14.

The two Koreas agreed to open the joint liaison office before the summit between ROK President Moon Jae-in and DPRK top leader Kim Jong-un, scheduled to be held in Pyongyang for three days from Sept 18.

The opening ceremony was forecast to be attended by some 100 people from the ROK and about 50 DPRK officials.

The joint liaison office was expected to increase communications between the two Koreas on a regular basis.

Also on Tuesday, Seoul's Defense Ministry said the ROK and DPRK agreed to hold the 40th round of inter-Korean working-level military talks on Sept 13 at Tongilgak, a DPRK building at the border village of Panmunjom.

The DPRK side proposed the military dialogue, accepted by the ROK side, according to the ministry.

The colonel-level military officers from the two sides were forecast to discuss ways to ease military tensions between the two Koreas, including the withdrawal of a part of guard posts inside the demilitarized zone (DMZ), which divides the two sides, on a trial basis.

Also on the dialogue agenda would be ways to disarm the Joint Security Area (JSA) inside the Panmunjom and the joint excavation of the remains of fallen soldiers during the 1950-53 Korean War.

Those issues were agreed upon by the two sides during the general-grade military talks in late July. 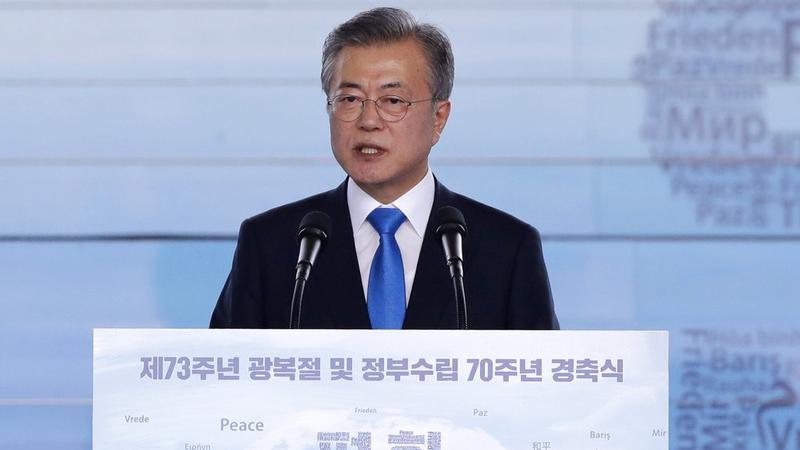 The Republic of Korea's President Moon Jae-in delivers a speech during a ceremony to celebrate the Korean Liberation Day, marking the 73rd anniversary of Korea's liberation from the Japanese colonial rule, in Seoul, Aug 15, 2018. (LEE JIN-MAN / AP)

Moon on Tuesday called on US President Donald Trump and DPRK leader Kim to make bold determinations for the denuclearization of the Korean Peninsula.

Moon made the remarks during a cabinet meeting. Moon said the leaders of the DPRK and the United States are required to make bold determinations and unveil a great scheme for the DPRK to advance to a higher level, a dismantlement of the nukes the DPRK owns.

Saying that the DPRK should conduct the nuclear dismantlement while the United States should create conditions with measures corresponding to it, Moon noted that in the process of the actions, the two countries should eliminate a deep distrust toward each other coming from the hostile relations that lasted for the past seven decades.

The ROK president expressed his hope for Pyongyang and Washington to rapidly resume sincere dialogues.

The peninsula's complete denuclearization, Moon said, was basically an issue to be resolved through negotiations between the DPRK and the United States.

Moon, however, noted that the ROK should make efforts to expedite and mediate the negotiations until dialogue and communications between Pyongyang and Washington are made smooth, saying President Trump and Chairman Kim called for playing such a role.

He noted that what the two Koreas need would not be a new declaration, but a fruitful development in inter-Korean relations, vowing to focus on the eased military tensions and the elimination of hostile relations among the ROK, the DPRK and the United States.

Also on Tuesday, the ROK's Foreign Minister Kang Kyung-wha met with a visiting US nuclear envoy to discuss denuclearization and peace on the Korean Peninsula, Seoul's foreign ministry said.

Kang held a meeting in Seoul with Stephen Biegun, US special representative for the DPRK affairs, exchanging views about the improved inter-Korean relations and the outcome of the recent visit by Moon's special envoys to Pyongyang.

The top ROK diplomat asked Biegun to play an active role to achieve the goal of completely denuclearizing the peninsula and building a permanent peace by continuing a positive progress in the peninsula situations.

Biegun told Kang that he will fulfill his role to achieve the peninsula's complete denuclearization and the settlement of peace based on a firm US-ROK alliance, vowing to continue close cooperation and consultations in each level between the two allies.
Biegun also met with his ROK counterpart Lee Do-hoon, special representative for Korean Peninsula peace and security affairs.

ALSO READ: ROK, US to continue peace measures if talks with DPRK lasts