LONDON  — Britain will unilaterally accept some European Union rules and give EU financial services firms continued access to the UK market in order to maintain stability if the country crashes out of the bloc without a deal, the government said Thursday.

Details of Britain's "no-deal" plans came in a raft of documents laying out government plans for a "no deal" Brexit and offering people and businesses advice on how to prepare.

The first 25 of more than 70 papers cover everything from financial services to nuclear materials. The rest are due to be released by the end of September

With seven months until Britain leaves the EU on March 29, negotiations on divorce terms and future trade have bogged down amid infighting within British Prime Minister Theresa May's divided Conservative government about how close an economic relationship to seek with the EU.

The government insists it is still confident of getting a deal with the EU before Brexit day on March 29, but is preparing for all outcomes.

READ MORE: After reprieve, May faces Brexit battle in parliament on trade

The documents published Thursday say "people and businesses should not be alarmed" by the planning.

The first 25 of more than 70 papers cover everything from financial services to nuclear materials. The rest are due to be released by the end of September.

The documents say Britain will allow EU financial services firms continued "passporting" rights to operate in the UK for up to three years, even if no agreement on such services is reached with the EU — though it can't guarantee that the bloc will let UK companies operate there. That could leave British retirees in the EU unable to receive their pensions. 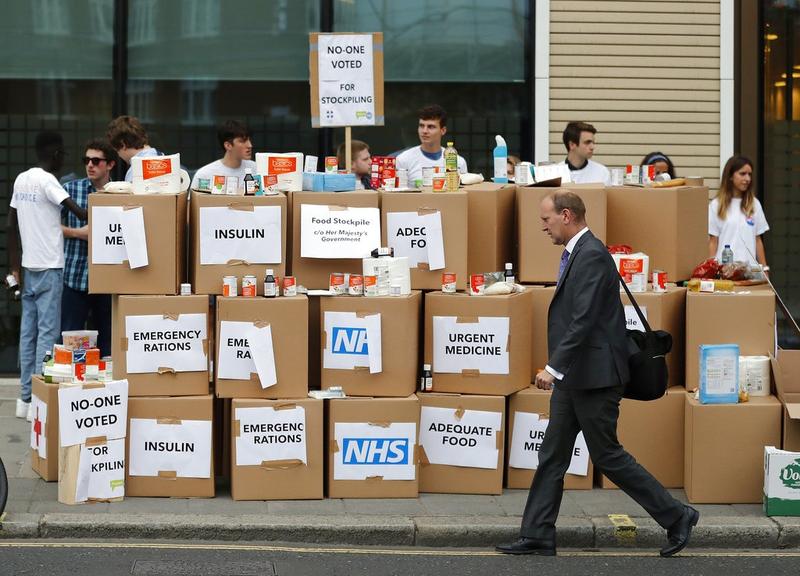 Anti Brexit activists protest as they deliver a pile of medical supplies in cardboard boxes to the Department of Health and Social Care in London, Aug 22, 2018. (FRANK AUGSTEIN / AP)

The UK will recognize EU standards for medicines — so drugs from the bloc won't need to be re-tested in the UK — and will continue to fund British research programs and academic exchanges that currently get money from the EU.

We have made clear that if negotiations don't achieve the optimum outcome, we will continue to be a responsible European neighbor and partner

Brexit Secretary Dominic Raab said Britain was determined to "manage the risks and embrace the opportunities" of Brexit.

"We have made clear that if negotiations don't achieve the optimum outcome, we will continue to be a responsible European neighbor and partner," he said in a speech to journalists and business leaders in London.

Raab dismissed alarming headlines suggesting the UK could run out of sandwich supplies and other staples.

"You will still be able to enjoy a BLT after Brexit," he said.

Despite the upbeat tone, the documents reveal the scale of disruption to the British economy and daily life that could follow Brexit.

While the UK currently has customs-free trade with the 27 other EU countries, the documents say a no-deal Brexit would mean a much harder border.

For goods going to and coming from the EU, "an import declaration will be required, customs checks may be arrived out and any customs duties must be paid," one document said.

The papers reveal that British organic farmers won't be able to export their produce to the EU unless the bloc approves UK standards — a process that can't start until after Brexit and takes nine months. And the widely recognized organic logo plastered across everything from vegetables to beef belongs to the EU, so UK producers will no longer be able to use it.

Cigarette packaging will have to be redesigned, because the EU holds the copyright on the photos of diseased lungs and other off-putting images emblazoned on the packs.

Millions of Britons could find online shopping more expensive after Brexit, the government acknowledged. The documents note that in the event of no deal "the cost of card payments between the UK and the EU will likely increase" and the EU-imposed ban on firms charging extra for credit-card payments will no longer apply.

"A no-deal Brexit has never been viable and would represent a complete failure of the government's negotiating strategy," he said.