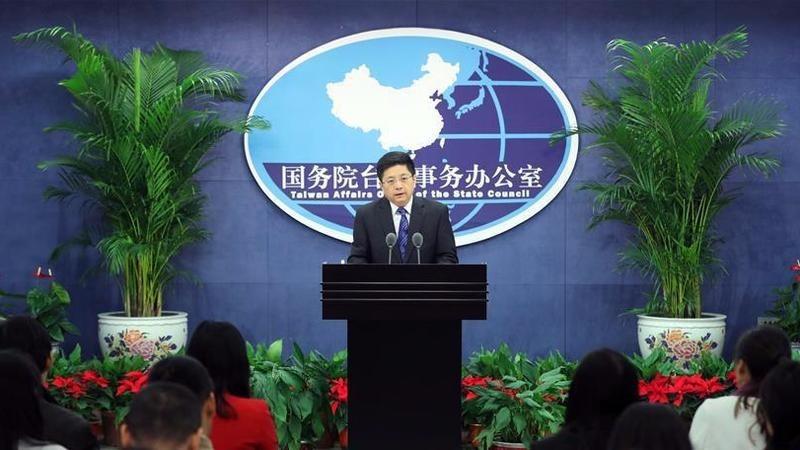 In this Nov 30, 2016 photo, Ma Xiaoguang, spokesperson for the Taiwan Affairs Office of the State Council, speaks at a press conference in Beijing, China. (CAI YANG / XINHUA)

BEIJING - Taiwan's Democratic Progressive Party (DPP) administration should "abandon its separatist stance, stop its words and deeds that undermine cross-Strait relations, and get back to the common political basis of the 1992 Consensus," a Chinese mainland spokesperson said Wednesday.

The DPP administration, since coming to power, has refused to accept the one-China principle and slandered the 1992 Consensus,  mainland spokesman Ma Xiaoguang said

The 1992 Consensus is confirmed by both sides of the Taiwan Strait, not a "political prerequisite" imposed on anyone, according to Ma Xiaoguang with the Taiwan Affairs Office of the State Council at a press conference.

"The core of the 1992 Consensus is that it sets down the common understanding of upholding the one-China principle and clearly defines the nature of cross-Strait relations.

"This is not only in line with objective facts, but also with the respective stipulations of the two sides. Meanwhile, it enabled both sides to shelve differences that are difficult to resolve, build up the most basic mutual trust, and open the door to cross-Strait exchanges and dialogue on the basis of consultation on an equal footing," he said.

Since coming to power, the DPP administration has refused to accept the one-China principle and distorted and slandered the 1992 Consensus. Ma said that as a result, the door to cross-Strait consultation was closed, harming cross-Strait peaceful development and the interests of Taiwanese compatriots.

"After the local elections in Taiwan earlier this month, more and more Taiwanese people realized that the 1992 Consensus is like water and air, which is closely related to their aspirations to develop the economy and improve people's livelihoods. They also realized that the DPP administration has been acting entirely out of its Party interests to undermine the 1992 Consensus and create tension across the Strait," Ma said.