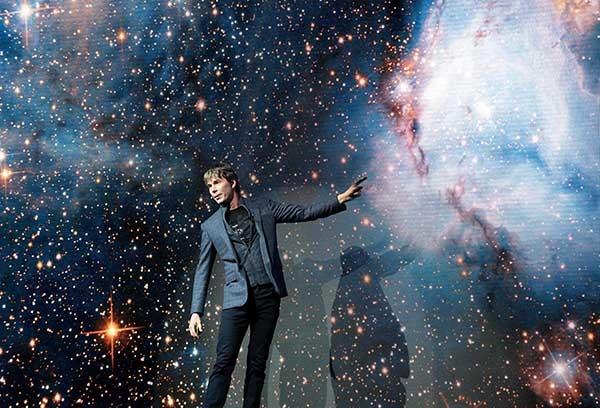 There’s a remarkable moment at the British Consulate in Hong Kong when, ten minutes before physics professor and TV personality Brian Cox is just about to deliver a promotional speech in front of journalists, a man who spends half his life looking for evidence of creation’s beginning as long as four billion years ago in the cosmos, looks up at the projection screen and says there’s so much light shining through that he can’t see. Is there a blind that can be lowered, he asks? No. “Okay, I’ll do my best, but you’ll just have to come to the show to see these images,” he jokes, with his mix of wild-eyed, disciplined-mind, boy wonder-esque persona. Cox is referring to his “stadium cosmology” performance, the Professor Brian Cox Universal World Tour, which will land in Hong Kong on June 5, and also visits Singapore, New Zealand and Australia.

In person, Cox burns like a comet, enlightening eyes and minds by the nanosecond. He uses state-of-the-art graphics and imagery from telescopes and space probes in his show, with ultra-high-resolution LED technology helping explore the latest missions to planets, the nature of space and time from the Big Bang to black holes, and the origin and fate of life and intelligence in the universe. He even “journeys” around and into a black hole. “On this new tour, I’m going a step further with technology,” he says. “And I hope it’ll offer people a completely new perspective on our place in the universe.”

A former pop star of the 1980s and ’90s, Cox is today a professor of particle physics at the University of Manchester. He’s also an author, most recently of Universal: A Guide to the Cosmos (with Jeff Forshaw), and a broadcaster, known for highly acclaimed BBC science programmes. Cox combines the best of David Attenborough, Carl Sagan and millennial thinking in his make-up. In an exclusive chat, we got to know the 51-year-old boy wonder of physics.

Was there a defining science-fiction movie for you, like Forbidden Planet or Creature from the Blue Lagoon?

I don’t think it’s a particularly prescient movie, but one of the earliest great movies I saw was Alien. I saw it in ’79 – so I was 11 – in the film club at school. And I was into spaceships at that time. So I watched it and got the full Ridley Scott.

In terms of influence, there’s Arthur C Clarke’s Childhood’s End, which I read when I was quite young. It had a massive influence on me. I just re-read it; it’s really a great book, but also strange and unusual, and there’s one great moment. Although it’s set in the mid-21st century, roughly, and the aliens have come down and mankind is about to perish under a different species, there’s a part where an astronomer forgets the name of a star and he goes to a library to look it up in a book. And you think to yourself – of all the things that will be missed by the year 2050, will a physical library be one of them?

A lot of people can’t come to terms with what it means to be human without considering the universe. So if there’s anything that surprises me about some people, it is that they don’t really care. But as long as enough people do, we’re okay

It seems the Chinese invented and thought of just about everything prior to everybody else. What is China’s relationship with cosmology like in history and how much has the West, if ever, borrowed from that?

If you’re talking historically, I don’t think I know. I would have to research that. Something like cosmology is a well-defined science as the large-scale study of the universe. So I would say there’s only one way of looking at the universe. I don’t know about it culturally or what Chinese cosmology was to people living in the 15th century. There are different ways of studying nature. What I do know is that in my field today, China is looking at building big accelerators, which is absolutely along the model of what we’ve been doing. Globally, it’s a very exciting time for cosmology and science generally.

Everything cosmological seems like the search for the Holy Grail. But if you had to single out one area that’s still most thrilling to consider, what would it be?

Dark energy is the one thing still out there. It tells us there may be something very, very profound about the way that space-time behaves – and why the universe is accelerating at the speed it is.

Where is the centre of the universe?

Would you ever consider living on Mars?

Should we be sending people to Mars?

There are two answers to that and it’s quite political, of course. Space flight is expensive. And if you’re interested purely in scientific research, then I think you can send a lot of robots, because you can get more of them.

But, it’s also true that human capability is far in excess of robots, so we need that. Most scientists would say they don’t like space flights because it removes a lot of money from their activities.

On the second point, we’re going to Mars because there is nowhere to else to go. Not to the other planets, so we have to stay here, or if we go anywhere, to Mars. But I think as a civilisation, we may need to start thinking of going somewhere. 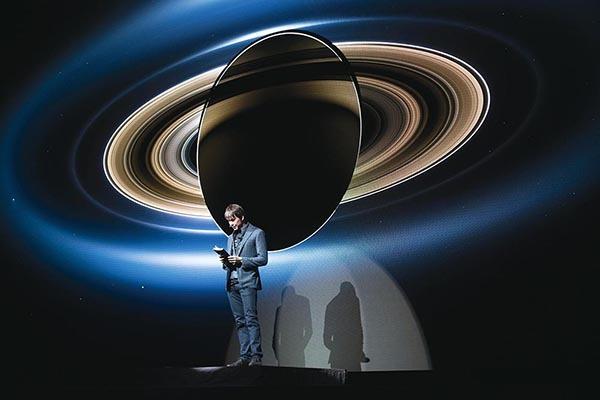 Have you written any children’s books, or will you?

It’s tremendously difficult to write books for children. A friend of mine, Oliver Jeffers, wrote a great children’s book. Every single word and sentence has to be so precisely constructed; it’s an art, a real art. I’ve written for newspapers – you would well understand – and you can have different allowable paragraph lengths, and sometimes the shortest sentences in a paragraph are the most difficult ones to write. I would love to write children’s books, but it’s a skill I don’t have now.

You’re a wine lover. Why not write a book on wine?

I’m a big fan of wine writer Jancis Robinson. For wine, I’m still on the learning curve. I started collecting it to drink, but I don’t collect it as investment; it’s more like a sort of exploration. I like learning curves, so music and wine and other subjects make for interesting diversions. I get bored every five or six years, so science is about the only constant thing. I love red wines, like Bordeaux, but as I’ve got older, I find they are less easy to drink. So I like white Burgundies, and I very much like chardonnay and champagnes, blanc de blancs. It’s a bit niche though, the study of white Burgundy, to write a book about.

Are you more underwhelmed or overwhelmed by the public’s general knowledge of science?

What’s interesting is that the questions are very often the same ones I would ask. That’s what we do with the show. We go straight to heart of the matter and take on very central questions – like why are we are, how did we get here and what should we be doing? And the answer is that we don’t fully know, but we have a vague idea. I can talk about the edge of our knowledge and that raises the questions that we all ask. The important thing about science is that it shouldn’t be separated from other aspects of human endeavour. I think science can be described as a human reaction to nature, and that’s the motivating factor. There’s only one interesting question really, in my view, which is: What does it mean to be small, fragile and finite – to live a small, fragile and finite life in an infinite universe? That, ultimately, is the only question that I’m interested in.

Physics is like a rule book for the building blocks we encounter, compartmentalising why and how things happen, and establishing reason and fact. But probability seems like the devil’s advocate; it comes along and stirs it all up in ways that are unknowable and unanswerable. Isn’t the very random nature of our existence here what makes our presence on Earth an ecstatic one to celebrate?

There’s a sequence where I say exactly that in the show. Why is the Earth the way it is? It’s a very complex mixture of the simple laws of nature and chance, and separating the two is important if you’re trying to think about our place in the universe. You have to understand there’s a lot of chance involved, which we can’t make sense of. It’s just like blind chance. For example, the asteroid that wiped out the dinosaurs – had that flicked one speck of dust a different way in relation to the solar system, we might not have happened. We wouldn’t be here. About one billion other things might not have happened, either. [laughs]

So you can’t define a human being through the laws of nature, but you can extract from the laws of nature a framework that allows you to think. You’re not allowed to stray outside it. For example, we do know we are very small. But there’s nothing we can do about that. I struggle with that sometimes.

One of your BBC programmes begins with a lovely moment where you examine the beauty of a snowflake.

The inspiration for that came from the 17th century and an incredible work called The Six-Cornered Snowflake by [Johannes] Kepler. It is absolutely brilliant. It’s considered the first book to ever describe the structure of crystals or snowflakes, and I would recommend it anyone and everyone. A courtier is charged by his king to bring the most valuable gift he can find that is close to nothing. So the courtier considers some water, some dust and then the snowflake. “I’ll give you the most valuable gift, which is the closest thing to nothing I can find,” he says.

Kepler is a great genius, with the most amazing mind. Every single question he asks about the universe so long ago is correct.

Do you think of space as having dimensions we can’t conceive of yet?

There are plenty of theories of extra dimensions and we do experiments to find them. Interestingly, one of the ideas about why gravity is so weak is because it has to deal with other dimensions, where other forces don’t.

What would you say is people’s biggest misconception about space?

It’s not a misconception, exactly, but a lot of people can’t come to terms with what it means to be human without considering the universe. So if there’s anything that surprises me about some people, it is that they don’t really care. But as long as enough people do, we’re okay. I remember people used to say to the famous US cosmologist Carl Sagan, “Look at those lights in the sky.” And he’d say, “They’re more than lights, kids – they’re worlds.”