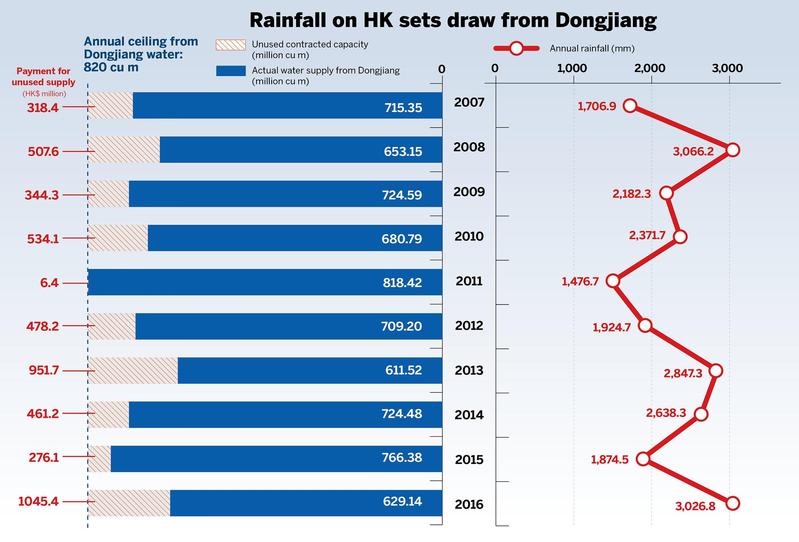 Hong Kong residents pay very low water rates (HK$263/100 cu m) compared to other global cities. The water tariff was frozen in 1995, while the cost of purchased water escalates with each contract cycle. The Singapore basic tariff was revised in the 2017 budget to HK$669/100 cu m and New Yorkers are charged HK$2,445/100 cu m. Our 2015 per-capita freshwater consumption at 132 liters cu m, is 21 percent above the global average.

Chen Ji, associate professor at the Department of Civil Engineering in the University of Hong Kong (HKU), criticized the city’s water tariff. The current system for domestic water consumption charges at four-month intervals, and the first 12 cubic meters is free. Chen said about 18 percent of Hong Kong people use less than that amount every four months.

Chen said this low water rate has led to a lack of public urgency about saving water, and in the long run, retards optimization of the city’s water supply. 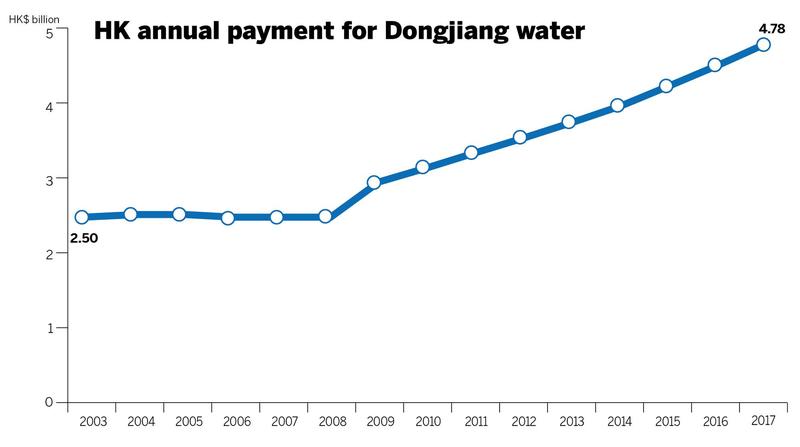 The excessive dependence of 70-80 percent on the Dongjiang source will come under severe financial and volume pressure, as other Guangdong cities grow in populations and water demand. Dongjiang allocates supply to Hong Kong, Dongguan, Shenzhen, Heyuan and Huizhou annually — all of them carrying 70-90 percent dependency. It also supplements water as required, to Shaoguan, Meizhou and Guangzhou. 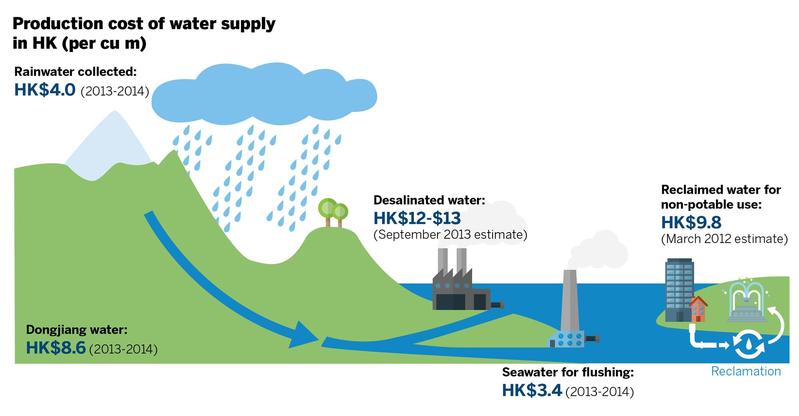 Singapore has bought freshwater from Malaysia since the 1960s to meet 50 percent of its annual needs. It is proactively implementing a strategy to meet domestic use and reach full self-reliance by 2061.

The first desalination plant, opened in September 2005, was rated the “world’s most efficient”, achieving a first year selling price of HK$2.75/cu m 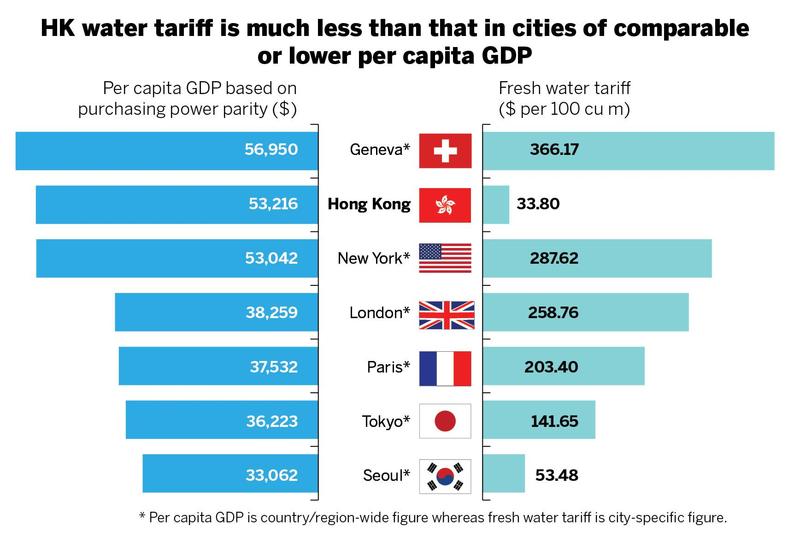 The domestic water supply comes from rainwater in reservoir catchments, and seawater for toilet flushing. Hong Kong has no wastewater recycling. It has no natural lakes or substantial underground water resources. A desalination plant at Tseung Kwan O is due to operate from 2020 with an annual capacity of 50 million cu m, which is 5 percent of freshwater requirement. That can be doubled to supply 10 percent of domestic needs, the Water Supplies Department (WSD) estimated.

However, it consumes high energy costs and pricing was estimated at HK$12-13 per unit in 2013 — which is much higher than purchase from Dongjiang, which supplies 70-80 percent of Hong Kong’s freshwater needs.

The WSD set the ceiling for buying water from Dongjiang at 820 million cu m annually, to ensure 99 percent reliability of supply. In the 10-year data from 2007-2016, only in 2011 did Hong Kong require to draw 818 cu m from Dongjiang when the annual rainfall fell to its lowest point of 1,476.70 mm. The average annual draw of Dongjiang water for the period was 703.3 million cu m.

Under the “Lump Sum Package Deal”, Hong Kong is committed to pay for the full supply ceiling even if it does not draw the agreed contract volume. The value of unused capacity paid for over the 10-year period 2007-2016 stands at HK$ 4.9 billion.

The question of “make or buy” arises along with the pressing need to mitigate long-term water security for Hong Kong. At an annual HK$4.5 billion purchase, perhaps alternatives can be explored.

Due to the variability of annual rainfall in Hong Kong, the current fixed annual ceiling on water volume from Guangdong is “like an insurance” which ensures water security and provides more scope for the operation of the local water supply, said Lin Tang-tai, senior engineer at the WSD. “Whenever there’s a need for more water, Guangdong can provide us with it,” said Lin.

Chen from the Department of Civil Engineering at HKU said “there is space for improvement” in the coming agreement. With over 30 years of study on water resources, Chen suggested a two-layer scheme be adopted, where Hong Kong pays a lower fixed-amount annual supply ceiling — say 780 million cu m — and pays more above the ceiling, if needed. “The agreement should be handled with a business model where more demand means more profit,” suggested Chen. 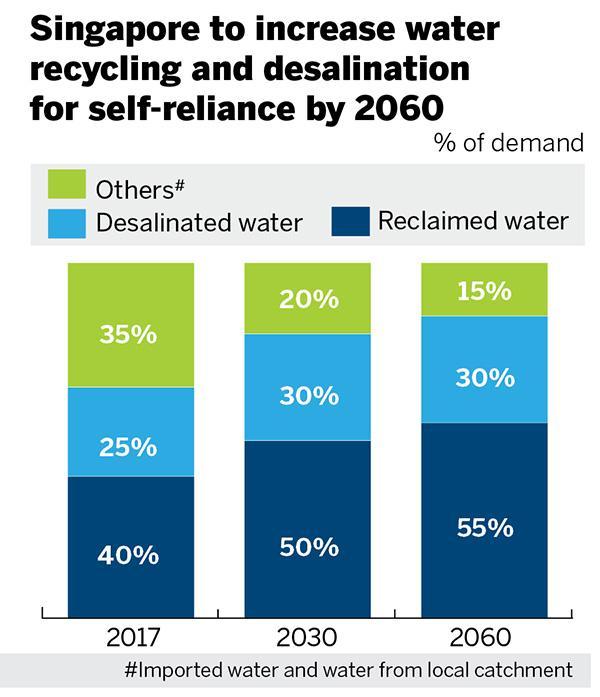 Chen of HKU felt the WSD was being too conservative. He said lowering the supply ceiling to 780 million cu m while maintaining the security of the water supply was practical, if the operation of Hong Kong’s reservoirs could be optimized.

The two largest reservoirs in Hong Kong — the High Island Reservoir in Sai Kung and the Plover Cove Reservoir in Tai Po — can hold almost 500 million cu m of water if full. “If the storage capacity of the reservoirs reached 90 percent, we wouldn’t need to import Dongjiang water for six months,” said Chen. The amount of storage in the reservoirs is enough to meet the water demand in drought weather, he added.

Wishing it so will not fill the reservoirs to 90 percent. But Hong Kong suffers serious spillage of its smaller reservoirs under heavy rainfall.

Despite plans for an “inter-reservoir transfer scheme” to conserve small reservoir overflows,  the WSD in 2015 said it had not yet sought funding approvals for the construction works. 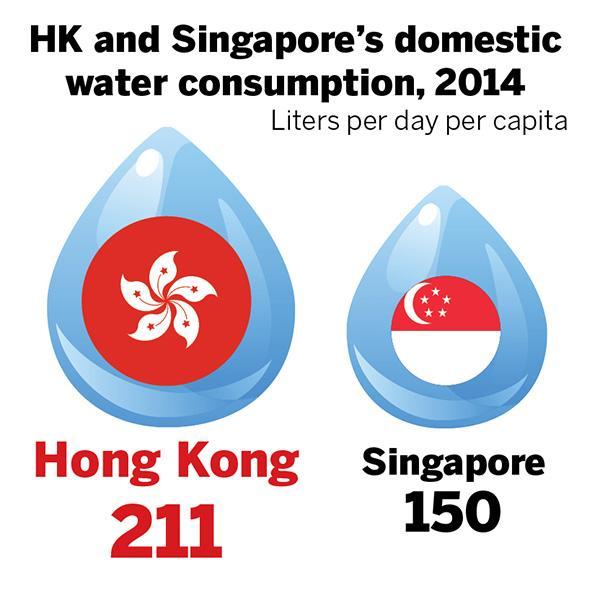 While the water supply arrangement guarantees Hong Kong a stable supply of Dongjiang water during 2015-2017, there is no assurance that Dongjiang will always be able to provide a constant water supply for Hong Kong

Statistics from Civic Exchange show that 26.5 percent of the city’s water supply was lost in 2010. The ratio increased to 33 percent in 2015. It means  hundreds of millions of dollars was wasted in 2015 alone. Repairs to public infrastructure achieved a 5 percentage points’ reduction in leakage between 2010 and 2015, through replacement and repair of water mains.

However, there seems little effective rectification for leaking private pipes connecting to residential and commercial blocks. Civic Exchange records show the loss in private connections increased greatly, from 2.5 percent in 2010 to 14 percent in 2015. Chen of HKU thinks the loss occurs when water is transferred from public pipes to pipe branches in each unit of private properties.

The WSD said in an email that the leakage rate is “the estimate derived taking into account limited information available”. Based on the WSD’s current information, 11-12 percent loss would be attributed to private mains leakage and the consumption of unbilled legitimate uses due to operational needs, such as water used for treatment processes, flushing of water mains, and other purposes, including firefighting.

A series of measures are being initiated by the WSD, to close the information loop between building owners, management agents, and the leak detection industry.

Hong Kong has been developing new water resources. One is desalination. The cost of constructing the desalination plant in Tseung Kwan O is estimated to reach HK$9.3 billion. However, Chen of HKU criticized the strategy, saying that desalination could not deal with the root problem of increasing water demand.

“The cost of maintenance and manpower would be more, placing a burden on the government. And it may not be a sufficient source of water supply,” he said.

Chen believed that Hong Kong should diversify its sources of water supply. He is involved in a project to alter atmospheric dynamics to precipitate rainwater. Cloud-seeding and similar experiments internationally have raised concerns earlier about environmental impacts, rainfall yield and cost-efficiencies.

Chen refused to elaborate on the development of the technology, saying it’s still a “business secret”. He claimed the technology will mature in five years and become commercialized in 10 years. He is confident that it will make useful contributions to Hong Kong’s water supply.