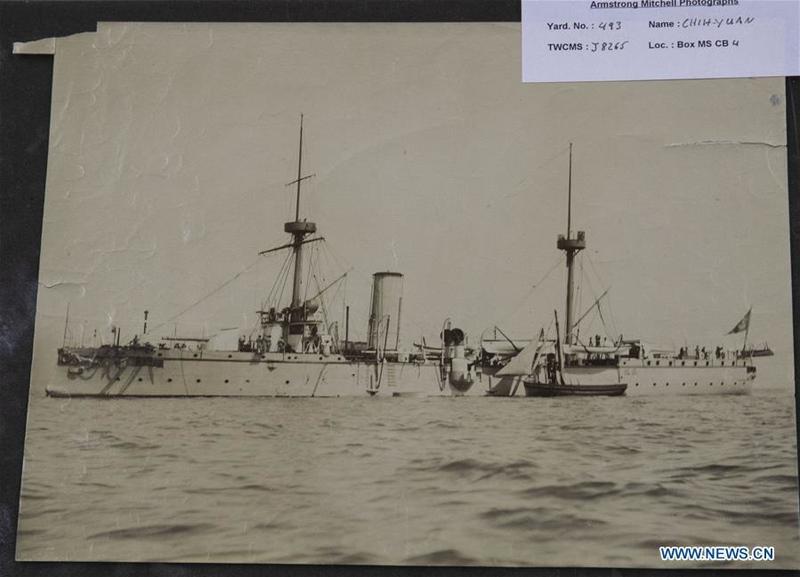 This copy photo taken on Nov 2, 2018 shows the file photo of cruiser Zhiyuan at the Tyne & Wear Archives in Newcastle, Britain. (PHOTO / XINHUA)

NEWCASTLE, Britain — Newly discovered plans in a British archive reveal details of a legendary Chinese warship destroyed more than 120 years ago during the First Sino-Japanese War.

The recent discovery of a set of seven plans is described as "extraordinarily meaningful" by researchers in China, propelling into spotlight the famous old story of the cruiser Zhiyuan (also known as Chih Yuen), one of China's most heroic military vessels.

The iconic warship, built in Britain in the mid-1880s as part of an ambitious plan by the authorities of the Chinese Qing Dynasty to vie for the sea power, was sunk in September 1894 in the Sino-Japanese war commonly known in China as the Jiawu War.

Chinese records show Rear Admiral and Zhiyuan's Captain, Deng Shichang, commanded the protected cruiser to ram a nearby Japanese cruiser while his ship was under siege. All but seven of the 252 crew members on board died after the ship was destroyed by an enemy shell and sank.

Plans for the steering gear of Zhiyuan and a sister ship have been discovered by a Xinhua journalist at the Tyne & Wear Archives. They are believed to be the first Zhiyuan plans to be found in more than a century.

READ MORE: Many facets of a patriot

Liu Qingzhu, a renowned Chinese archaeologist with the Chinese Academy of Social Sciences, told Xinhua that the newly discovered plans are expected to help find out what actually happened to Zhiyuan during the war.

"The legendary cruiser is the embodiment of the Chinese people's patriotism and determined resistance against aggression," he said. "It is very important to figure out more historical details concerning the ship." 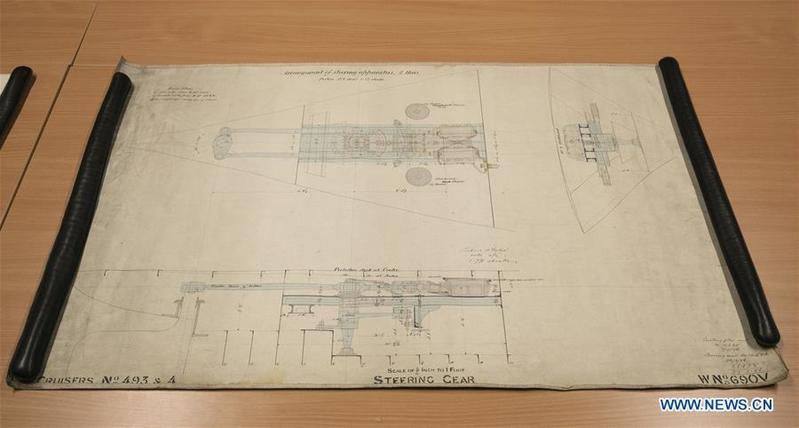 The documents were referred to as "Cruisers Nos493&4", with the numbers given by the shipyard in northeast England for Zhiyuan (493) and its sister ship Jingyuan (also known as Ching Yuen, 494), according to the local shipbuilding archives.

"Shipyard convention is to mark everything pertaining to a ship under construction with the yard number, building berth, steel plates, plans, cost sheets -- everything," said Ian Whitehead, a renowned maritime historian and formerly keeper of maritime history for Tyne & Wear Archives & Museums. "So I have no doubt that this plan belongs to Chih Yuen and Ching Yuen."

It is believed the shipyard under the Armstrong Whitworth company located in Britain's famous Tyneside shipbuilding area, designed and built four military cruisers, including Zhiyuan, for the then Chinese navy.

Whitehead said the newly discovered plans show details of every major component of the steering gear system and particularly the kind of hydraulics and a steering quadrant.

"There are large-scale drawings of them, so it looks to be pretty complete, or complete enough," he told Xinhua, adding that he thinks it would be possible to rebuild Zhiyuan's steering system based on the plans. 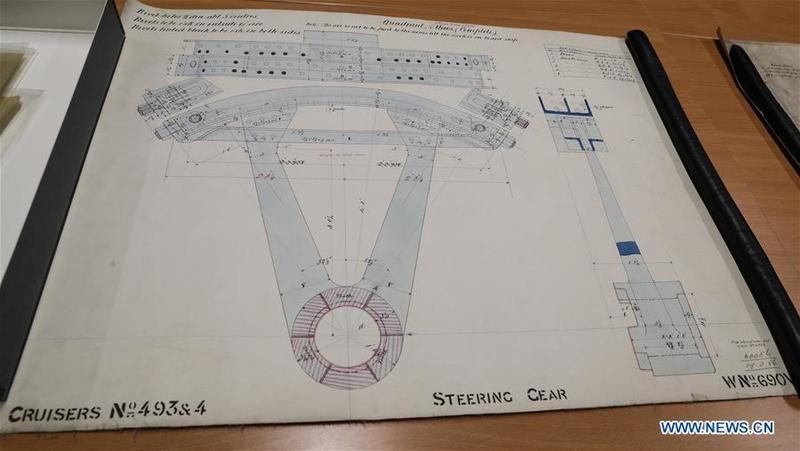 Rachel Gill, an archivist who has been working with the Archives over the past 17 years, confirmed that they are original plans for the cruisers Zhiyuan and Jingyuan.

"The plans were deposited with the then Municipal Industrial Museum (the predecessor of today's Discovery Museum which shares the building with the Archives) when the Elswick shipyard closed in 1937," he told Xinhua.

"They were transferred to the Archives in 2001 to improve access," said Gill.

The senior archivist said she believed the plans had been in the Archives for at least 20 years and as far as she knows, no one had been researching them previously.

A senior archivist said she believed the plans had been in the Tyne & Wear Archives for at least 20 years and as far as she knows, no one had been researching them previously

Tyne & Wear Archives is home to thousands of documents ranging from the 12th to 21st centuries and include building plans, school, hospital and church records as well as business records, especially those of important local industries such as shipbuilding, engineering and mining.

Gill said the archives also contained a number of photographs of the cruiser Zhiyuan, as well as around 300 items of correspondence regarding the Chinese government's purchase of the Tyne-built warships.

Armstrong Whitworth & C. Ltd was a major British manufacturing company in the early years of the 20th century. Headquartered in Elswick, Newcastle upon Tyne, the company engaged in building armament, ships, locomotives, automobiles and aircraft.

Zhiyuan, which is a protected cruiser with armored deck and similar to armored cruiser in later times, was built between 1885 and 1887.

The Army and Navy Gazette published at that time said, "It is humiliating but nevertheless an actual fact that the two cruisers of the Chinese squadron (the Zhiyuan and Jingyuan) are superior in certain novelties of construction to any of our own vessels."

"In point of speed they cannot be touched by our swiftest cruisers," it said.

"The discovery of some original plans for Zhiyuan is extraordinarily meaningful," said Zhou Chunshui, a senior researcher with China's National Center of Underwater Cultural Heritage. Zhou is also head of an archaeological team examining Zhiyuan's wreckage since four years ago. 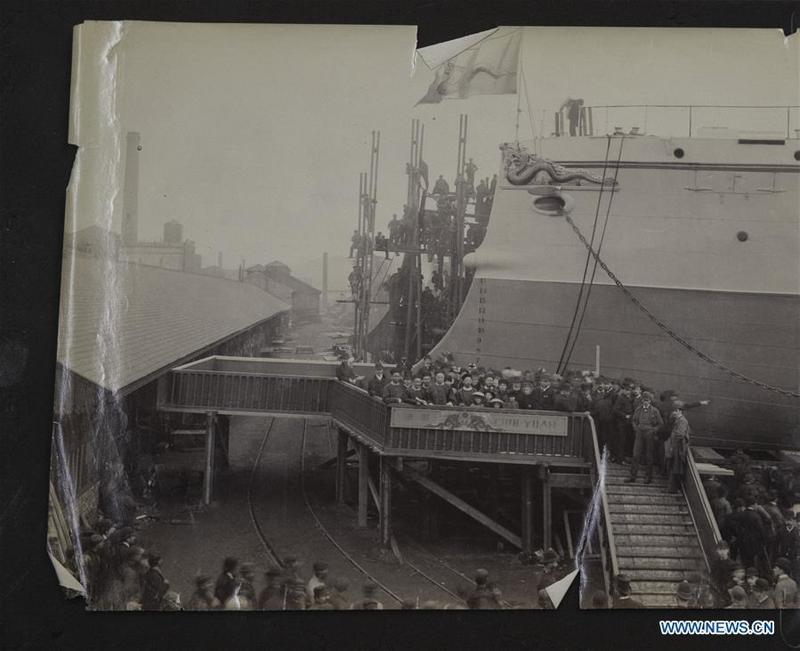 This copy photo taken on Nov 2, 2018 shows the file photo of cruiser Zhiyuan at the Tyne & Wear Archives in Newcastle, Britain. (PHOTO / XINHUA)

More than 100 relics have been salvaged so far from the wreckage. They are classified in three categories: ship-borne weapons, ship parts and articles for sailors' daily use. "The plans can be compared with what we have found underneath the water," Zhou told Xinhua.

Zhang Liyuan, a researcher who has been following the Newcastle shipbuilding archives and history of the Beiyang Fleet to which Zhiyuan had belonged, said that with the newly discovered plans, for the first time, people can understand the details of the armor-plate and hull designing of the cruiser. "The newly discovered plans are also helpful in further analyzing the reason why Zhiyuan was sunk and its propelling system."

Jiang Ming, an expert on the history of modern Chinese navy, said the discovery is "inspiring," and "The plans enable us to know more about the efforts made by our fathers to push the construction of the modern Chinese navy" partly through the search and employment of advanced vessels.

But when Zhiyuan fought in 1894, years after being put into service, it had already lagged far behind Japanese warships in speed or firepower, said Fang Bing, professor with the National Defense University of People's Liberation Army (PLA) of China. "Technologies advance day by day," he said. In his opinion, chiefly due to the inferiority in military technology and armament, better-trained Chinese navy lost that fight to Japanese. 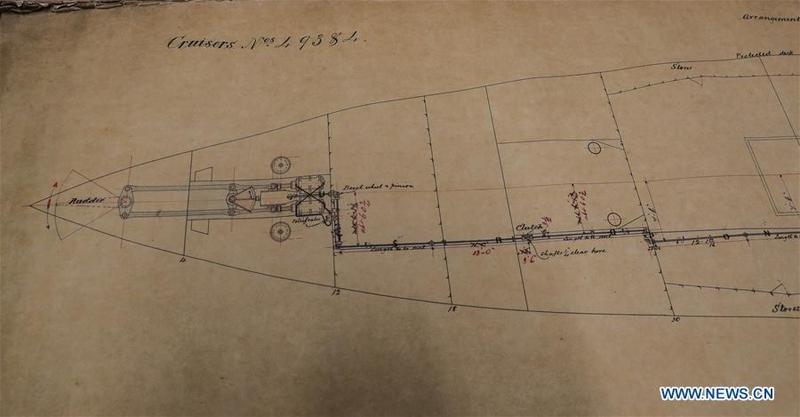