Craftsman sets the tone in revival of village tradition

By Li Yang and Sun Ruisheng 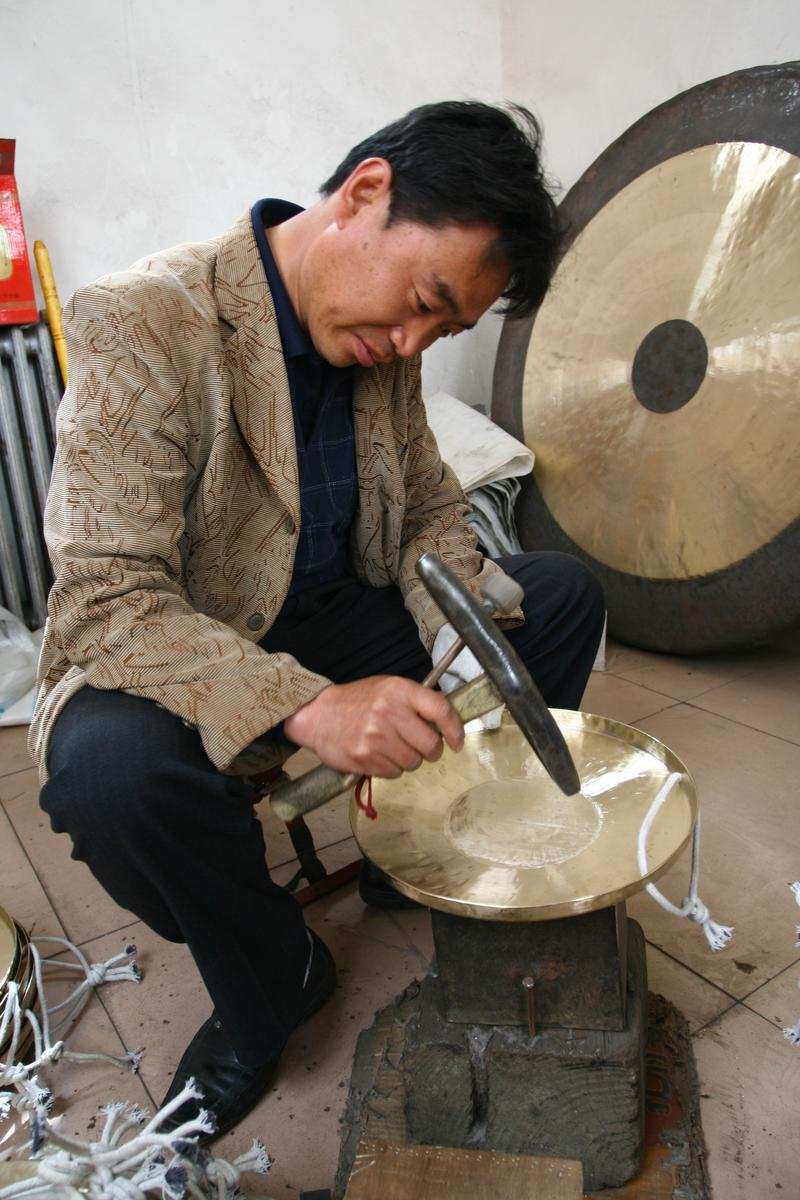 During the early Tang Dynasty (618-907), Zichang county in northern China's Shanxi province was well-known as a manufacturing center for brass percussion instruments.

"It takes decades of experience to develop Yan's ability to 'tame' alloy into clear and melodious instruments."

There were many temples in the region at the time, and religious activities created a big demand for the instruments. The manufacturers in Zichang prospered, and its brass instruments were later widely used in operas nationwide, according to Li Siling, a researcher of intangible cultural heritage at the county's cultural center.

Xinancheng village is one of the few in Zichang to have inherited a reputation for craftsmanship in the making of percussion instruments, and 59-year-old Yan Gaihao, who has been making gongs and cymbals for more than four decades, plays a key role in maintaining Zichang's place as the preeminent manufacturing center for percussion instruments in China.

Yan's hands are rough and covered with calluses, an indication of the hard work involved in the trade. That, and better paid jobs in cities, have lured many young people away from inheriting the craft.

Born into a family that has made brass instruments for generations, Yan started learning the craft from his uncle at the age of 18.

The manufacturing of the instruments is complicated. First, the raw materials must be bronze and tin of high purity, which are melted at high temperatures and mixed together according to fixed ratios, which vary for different instruments. Then, the alloy is made into the original forms of the instruments through hot and cold forging. Lastly, it takes careful hammering and polishing to complete the instruments.

"Every strike of the hammer－which happens thousands of times－counts, especially when the tuning of the instruments has to be set at the later stage," Yan said. "It is crucial for the tone color and quality of the instruments.

"As the saying goes, 'It takes thousands of hits to make a gong, but one hit to set the tone.'"

Yan only needs a small hammer to turn a distorted or mute gong into a sonorous one. "It is definitely more than just a hammer. Good hearing and an accurate combination of hammering and judgment are crucial," said Li Yanfeng, an apprentice at Yan's workshop. "It takes decades of experience to develop Yan's ability to 'tame' alloy into clear and melodious instruments."

Different customers have different requirements for the tone colors of the instruments, which means those making them must be familiar with the characteristics of different local opera tunes, and use different hammering techniques to translate the small differences in their requirements into finished instruments.

Li Yanfeng said that part of the work cannot be standardized, as it takes years of experience to feel and master the skills.

After the traditional instrument-making process and Yan's skills were recognized as national intangible cultural heritage in 2009, Yan was appointed by local authorities to pass his techniques down to future generations.

To ease the workload and help improve production efficiency, as well as to attract more young people to the centuries-old trade, Yan has done his best to modernize the manufacturing process.

For instance, he has transformed the open furnace into a closed one so as to keep the temperature at a constant 700 C, and introduced advanced polishing equipment and pneumatic hammers into the production process.

With the improvements that Yan made, the daily output of a skilled worker－in terms of the total weight of the instruments made in a day－rose from 2 kilograms to 15. The products have also become more durable due to the advanced manufacturing processes.

Despite the improvements, the final step of setting the instrument's tone is still only undertaken by experienced craftsmen. It is also the most difficult skill to pass on to others.

In 2005, Yan merged nine workshops in the village and founded a company that now produces more than 150 kinds of brass instruments for customers across the country.

The last craftsman from the old generation in the county is now in his 80s, and lives in Yan's village. "If there is no fresh blood flowing in, the craftsmanship will soon be lost," Yan said.

Yan has about 20 apprentices and also organizes training classes for young people to attract them to the trade, through which more than 50 people have come to learn the techniques in his company since 2006.

READ MORE: In the name of art, sculptures explore history of Chinese nomenclature

Local government departments are also working with him to record the techniques that have been passed down from generation to generation through oral instruction.