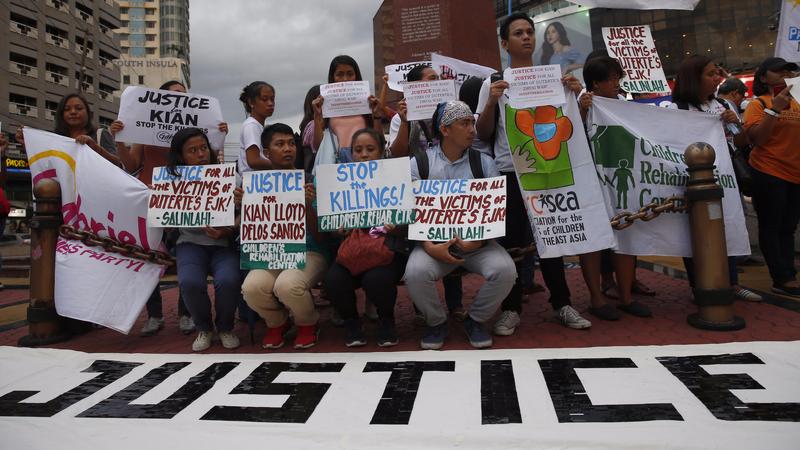 Protesters display placards during a rally to condemn the recent killings in President Rodirgo Duterte's renewed crackdown on drug offenders which also claimed the life of a minor, Aug 18, 2017, in Quezon city north of Manila, Philippines. (BULLIT MARQUEZ / AP)

MANILA – Mourners at the funeral of a Philippine man who police shot dead protested his innocence on Sunday, the latest sign of rising anger over President Rodrigo Duterte's bloody campaign to stamp out drugs.

Adding to a growing outcry over the bloody crackdown, a Philippine Catholic leader, meanwhile, said that church bells would be rung every night for three months across his northern district to raise alarm over a sharp spike in police killings of drug suspects.

More than 12,500 people, many small-time drug users and dealers, have been killed since Duterte took office in June 2016. Police say about 3,500 of those killed were shot by officers in self-defense.

We knock on the consciences of those who kill even the helpless, especially those who cover their faces ... to stop wasting human lives.

Human rights monitors believe many of the remaining two thirds were killed by assassins operating with police backing or by police disguised as vigilantes - a charge the police deny.

On Sunday, dozens of mourners wearing with white T-shirts with the slogan "Kill drugs, not people", bore the coffin of Leover Miranda to his grave in a Manila cemetery.

READ MORE: At least 80 dead after escalation in Philippines war on drugs

Miranda was killed this month in what police said was a drug sting operation but relatives say he was innocent.

"I want justice for my son," Elvira Miranda, 69, told Reuters.

"I have no powerful friends, I do not know what to do, but I want the people behind this senseless killing punished."

Most people in the Philippines support the anti-drug campaign and Duterte remains a popular leader but questions have begun to be asked about the slaughter, with more than 90 people killed in a new surge of shootings in recent days.

The country's two most influential Catholic bishops on Sunday spoke against the latest deaths, asking the faithful to pray for the victims.

"We knock on the consciences of those who kill even the helpless, especially those who cover their faces ... to stop wasting human lives," said Cardinal Luis Antonio Tagle, archbishop of Manila.

Another senior cleric, Archbishop Socrates Villegas, called for churches to ring their bells every evening at 8 pm, to stir the consciences of the authorities.

"You shall not kill. That is a sin. That is against the law," he said in a statement.

Television channels aired CCTV footage that showed Kian Loyd Delos Santos being carried by two men to a place where his body was later found, raising doubt about an official report that said he was shot because he fired at police. 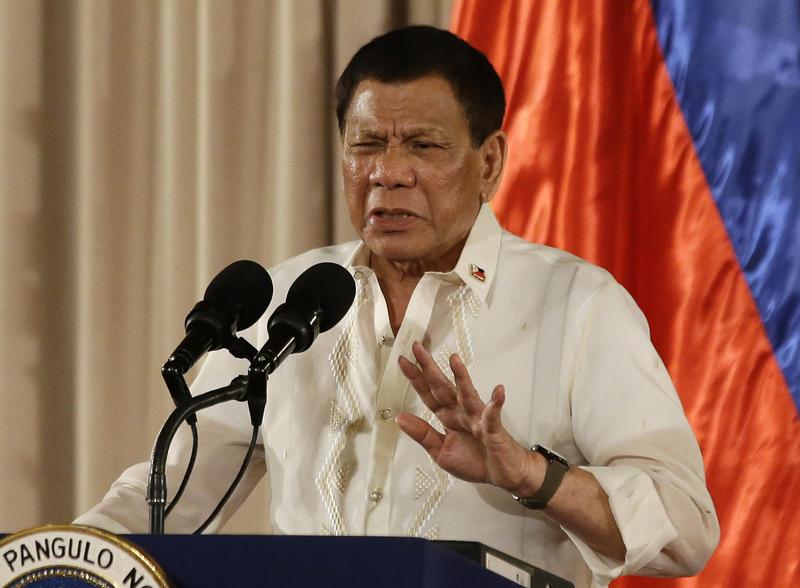 In this Aug 16, 2017 photo, Philippine President Rodrigo Duterte gestures during the 19th Founding Anniversary of the Volunteers Against Crime and Corruption at the Malacanang Presidential Palace in Manila, Philippines. A renewed police crackdown in the Philippines has left more than 80 drug and crime suspects dead in just a week. (AARON FAVILA / AP)

Some civil society groups and left-wing activists have called for protests increasing anger with the police was evident in social media posts.

Metro Manila police chief Oscar Albayalde said he has suspended the police chief in Caloocan City, where the boy was killed, pending an investigation. Three officers involved in the operation were earlier relieved of duties.

The justice department has also begun an investigation while senators will also summon police this week to explain the sudden rise in killings.