By Chen Weihua in Brussels 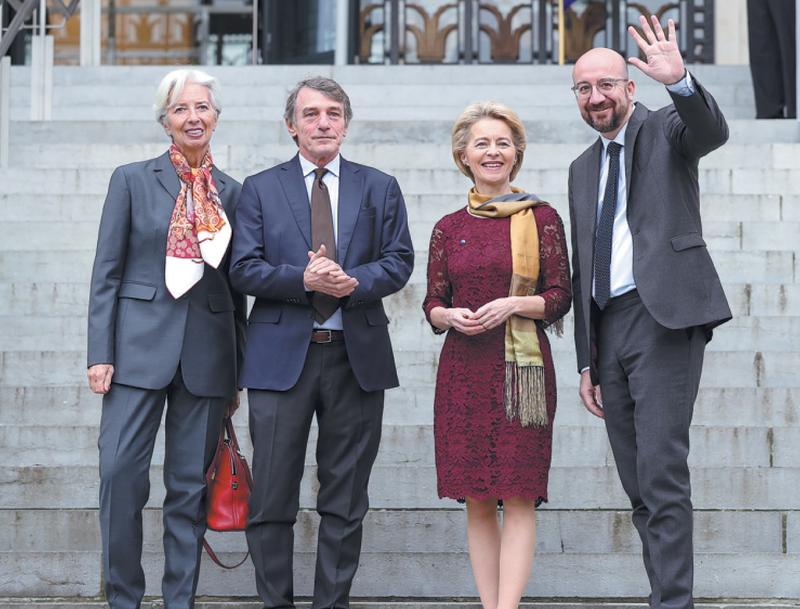 During the call, Li congratulated von der Leyen on assuming the new post and spoke highly of the current development of China-EU relations, the Foreign Ministry said.

Li said that as the world's largest developing nation, China still has a long way to go to achieve modernization. He pledged that China will actively fulfill the commitments made in the Paris Agreement.

He also welcomed the new EU leaders to visit China next year for the 22nd China-EU summit.

Von der Leyen said she is looking forward to the summit in China next year. She said her call with Li on the first day of her taking office shows that the EU highly values its relations with China.

The first female commission president said that the EU and China share broad common interests on such issues as sustainable development and negotiating a comprehensive investment agreement.

She said the new commission will prioritize its work on climate change, adding that the EU highly appreciates China's efforts in this regard and is willing to strengthen cooperation with China on issues such as fighting climate change and reforming the World Trade Organization to further promote bilateral relations.

The treaty reformed EU institutions, clarified EU operations and gave the European Parliament a bigger role in voting in the EU's executive body and increasing its legislative power.

Von der Leyen was supposed to take office on Nov 1, replacing Jean-Claude Juncker, but the process was delayed after the European Parliament rejected three of her commissioner-candidates.

"There could be no better day to begin work than on this anniversary," she said on Sunday, adding that it is the responsibility of her and her team to leave an EU "that is stronger than the one we have inherited".

The new EU leadership have made climate change a top priority. Von der Leyen, Michel and Sassoli attended the opening ceremony of the UN Climate Change Conference (COP25) in Madrid on Monday when she delivered a speech of EU's vision.

Von der Leyen will unveil the details of the European Green Deal on Dec 11. She also hoped that EU leaders, who will gather for a European Council summit on Dec 12, will agree on a goal of climate neutrality by 2050, something that some Central and Eastern European members still disagreed upon a few months ago. She has made it clear that future trade deals must contain a chapter on "sustainable development".

Brexit will be a major, immediate challenge for the new EU leadership. The United Kingdom's national elections on Dec 12 will determine how Brexit will play out in the days ahead. The UK is expected to leave the EU on Jan 31 if Prime Minister Boris Johnson and his Conservative Party win a majority. Otherwise, more uncertainty is expected.

The EU is also looking to find ways to deal with a United States administration that it does not see eye-to-eye with on issues such as climate change, the Iran nuclear deal and rules-based global trade.

The WTO Appellate Body will cease to function on Dec 11 after the US blocked appointments of new judges.

The EU is in a trade dispute with the US after the Trump administration announced in October the imposition of US$7.5 billion in tariffs on EU goods after winning a WTO case against EU subsidies to Airbus.