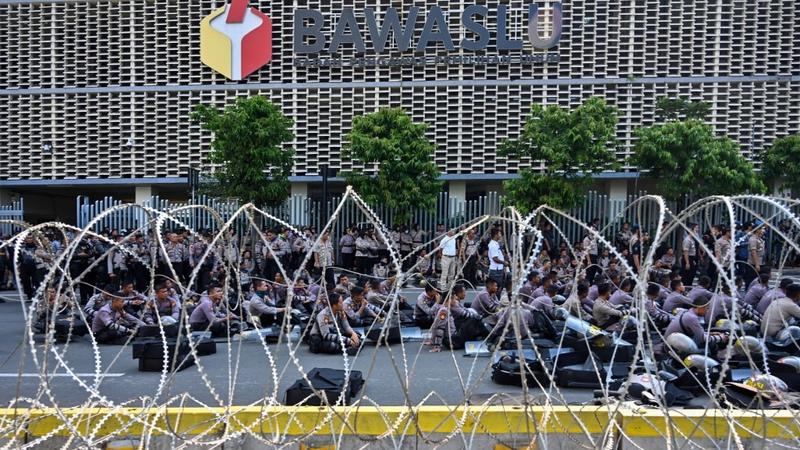 Policemen keep watch on protesters during a demonstration outside the Elections Oversight Body (Bawaslu) in Jakarta May 21, 2019. (ADEK BERRY / AFP)

JAKARTA - Indonesian President Joko Widodo comfortably won re-election in last month's poll, an official count showed on Tuesday, throwing the spotlight on his opponent who refused to concede as his supporters gathered in the capital in protest at the result.

The retired general pledged he would "continue to make legal efforts in line with the constitution to defend the mandate of the people".

The General Election Commission (KPU) confirmed unofficial counts by private pollsters in the April 17 election, giving Widodo a 55.5% share of votes against 44.5% for Prabowo Subianto.

Widodo won more than 85 million votes of a total of 154 million cast in the world's third-largest democracy, but Prabowo told reporters he believed there had been widespread cheating and about 800 supporters gathered in a peaceful protest.

The retired general pledged he would "continue to make legal efforts in line with the constitution to defend the mandate of the people".

Sufmi Dasco Ahmad, the legal director of Prabowo's campaign team, confirmed it planned to contest the result in the Constitutional Court.

The KPU announced official results more than a day earlier than expected after working into the early hours of Tuesday.

On Monday, an election supervisory agency dismissed claims of systematic cheating, citing a lack of evidence, and independent observers have said the poll was free and fair.

A relaxed looking President Widodo pledged on Tuesday to be a leader for all Indonesians. 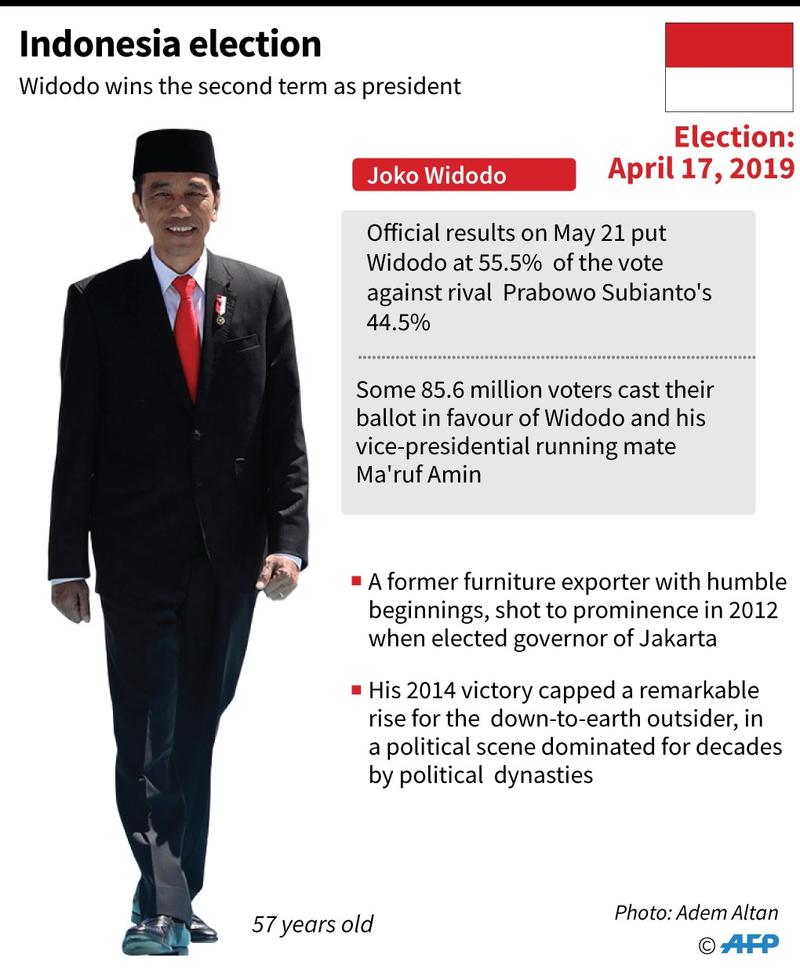 An AFP graphic shows Indonesia's President Joko Widodo, who has won a second term as president.

"We are grateful and proud that amid our differences, we have been mature in keeping the peace," he said on a visit to a poor neighbourhood of the capital.

Ben Bland, director of the Southeast Asia Project at Lowy Institute, said the election showed how identity and religious politics appeared to be increasingly "embedded in the political discourse in Indonesia".

"The challenge for Jokowi is to try and find a way to defuse tensions," said Bland, using the president's nickname.

Financial markets were mixed, with stocks up nearly 1% and the rupiah off 0.1%.

"On the other hand there is concern of Prabowo not accepting the result, but we can see everywhere the police and army are ready to ensure security," Taneli said.

Prabowo had warned the cheating claims could trigger "people power"-style protests, though ahead of the result he had urged supporters in a video to be "peaceful in our struggle".

Authorities have tightened security in the capital in a bid to choke off any civil unrest and detained dozens of militant Islamists suspected of planning attacks. Police said they had held or interrogated at least three leading opposition figures for suspected treason. 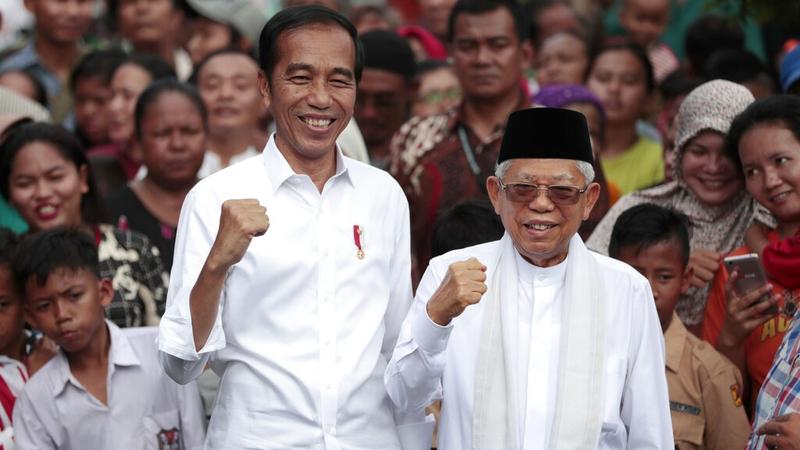 Incumbent Indonesian President Joko Widodo, left, and his running mate Ma'ruf Amin pose for photographers as they declare their victory in the country's presidential election in Jakarta, Indonesia, May 21, 2019. (DITA ALANGKARA / AP)

Police have rolled out extra barbed wire and readied armoured trucks and water cannon around the KPU. Some schools in Jakarta have also shut this week and offices allowed staff to work from home.

Prabowo's supporters were gathering mainly at the election supervisory agency, while there was also a small rally at the KPU in support of the election commission.

The losing candidate can lodge a challenge in the constitutional court within three days, otherwise the election panel will officially declare the winner. Prabowo's challenge to his 2014 defeat by Widodo was rejected.