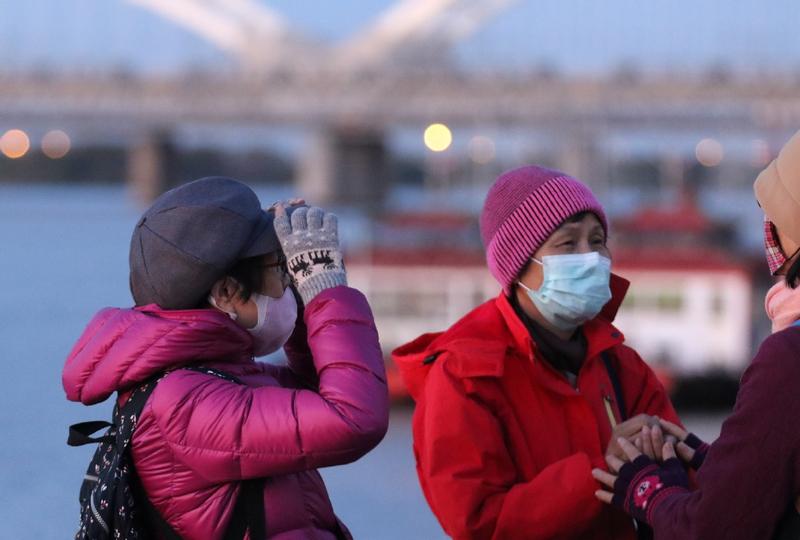 Seniors are heavily clad along the Songhua River in Harbin, capital of Heilongjiang province, on Tuesday. The lowest temperature in the city was close to the freezing point. (ZHANG SHU / CHINA DAILY)

Temperatures will continue to drop nationwide and heavy rain will hit South and Southwest China until Oct 18 due to cold air combining with warm, humid air.

According to the China Meteorological Administration, from Thursday, cold air will appear first in eastern parts of the Inner Mongolia autonomous region and then gradually move southward.

From Saturday, temperatures in North China will be even lower, and in Northeast China they will drop by as much as 10 degrees to less than 20 C

In the majority of China, temperatures will drop by 4 to 6 degrees on average.

From Saturday, temperatures in North China will be even lower, and in Northeast China they will drop by as much as 10 degrees to less than 20 C.

Furthermore, the combination of cold air that will move southward to mix with warm, wet air will bring precipitation to many areas in South China.

For the next 10 days, as cold air continues to move southward, rains will batter northwestern and southwestern China with precipitation between 30 and 60 millimeters, an increase of about 40 to 80 percent year-on-year. Snow will come to the Tibet autonomous region by Saturday.

The administration said that since precipitation in southwestern China and other places will be relatively high, people there should be wary of heavy rainstorms, floods, debris flows, landslides and other geological hazards.

The administration added that due to the positive influence of coldness and precipitation, atmospheric conditions to diffuse pollution in most parts of the country are generally favorable. Though conditions for diffusion were expected to be slightly poor in North China and the western parts of the Yellow River with a little pollution in these areas on Friday, conditions will improve starting on Saturday and the hazy weather will be weakened and dissipated due to the cold air.

No air pollution is expected in most areas in the following week.

As foggy weather increases this month, the administration said that highway and shipping departments should pay attention to the impact of fog on traffic safety.