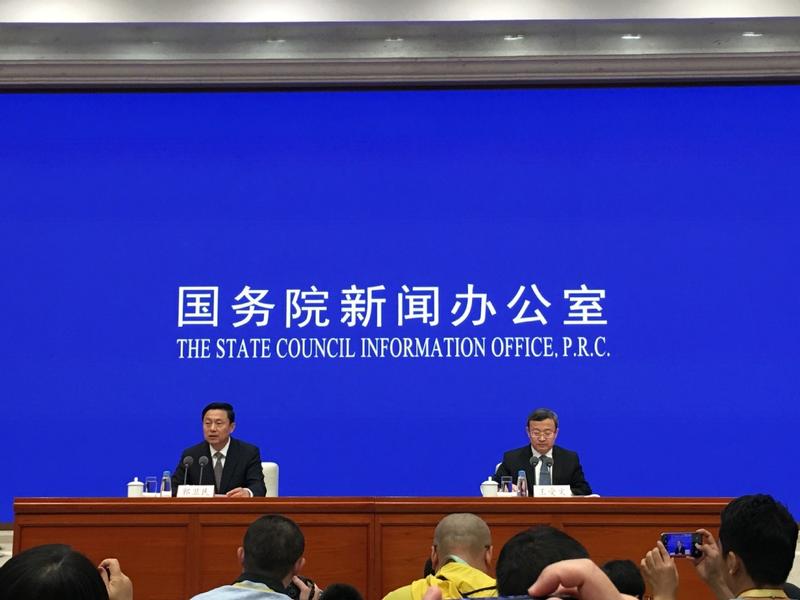 The white paper, "China's Position on the China-US Economic and Trade Consultations," was issued by the State Council Information Office.

Besides a preface and a conclusion, the 8,300-character white paper devotes three sections to elaborate on the damages of the trade frictions provoked by the United States, the US backtracking on its commitment in the consultations, and China's commitment to credible consultations based on equality and mutual benefit.

The restrictive measures the US has imposed on China are not good for China or the US, and still worse for the rest of the world.

China's Position on the China-US Economic and Trade Consultations

The Chinese and American economies were highly integrated and together constituted an entire industrial chain in today's globalized world. The two economies are bound in a union that is mutually beneficial and win-win in nature, therefore equating a trade deficit to being taken advantages of is an error, according to the white paper.

"The restrictive measures the US has imposed on China are not good for China or the US, and still worse for the rest of the world," reads the white paper.

The US tariff measures led to a decrease in the volume of China's exports to the US, which fell by 9.7 percent year-on-year in the first four months of 2019, dropping for five months in a row. As China has to impose tariffs as a countermeasure to US tariff hikes, US exports to China have dropped for eight months in a row.

The uncertainty brought by US-China economic and trade friction made companies in both countries more hesitant about investing. China's investment in the US continued to fall and the growth rate of US investment in China has also slowed.

Instead of boosting American economic growth, the US tariff measures have significantly increased production costs for US companies, pushed up domestic prices and undermined American people's livelihoods.

The US protectionist measures also damaged the multilateral trading system, seriously disrupted global industrial chains and supply chains, undermined market confidence, and posed a serious challenge to global economic recovery and are a major threat to the trend of economic globalization, according to the white paper.

With the outlook for China-US trade friction unclear, the WTO has lowered its forecast for global trade growth in 2019 from 3.7 percent to 2.6 percent. 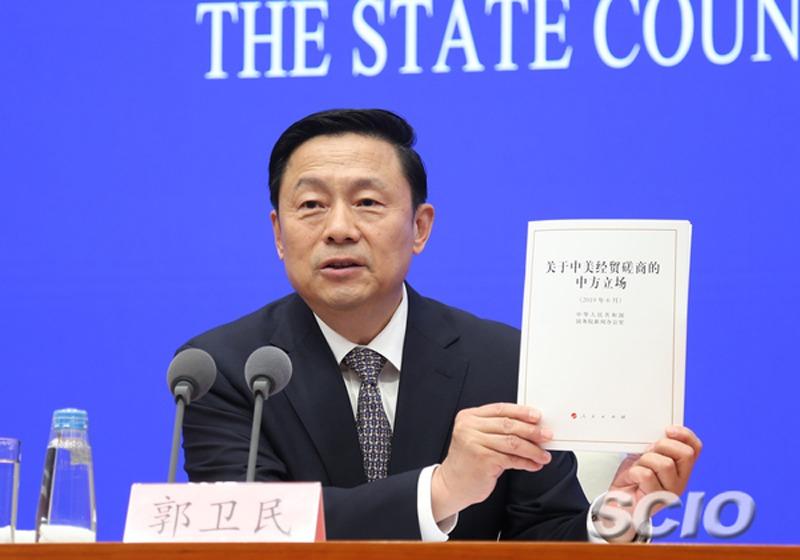 The State Council Information Office issued a white paper to provide a comprehensive picture of the China-US economic and trade consultations. (PHOTO / SCIO.GOV.CN)

US BACKTRACKING LED TO TALKS SETBACKS

China had advocated resolving economic and trade friction through negotiation and consultation from the start. However, the US administration kept changing its demands in the previous negotiations.

Setbacks in the consultations were all results of "US breach of consensus and commitments, and backtracking," according to the white paper.

Addressing a press conference in Beijing after issuance of the white paper Sunday, Chinese vice commerce minister Wang Shouwen denied US accusations that China backtracked on its position in trade talks, underscoring that China has demonstrated the greatest sincerity and a strong sense of responsibility for resolving trade disputes through dialogue.

The white paper pointed out that China will not compromise on major issues of principle. China does not want a trade war, but it is not afraid of one and it will fight one if necessary. China's position on this has never changed

Historical experience has proved that any attempt to force a deal through tactics such as smears, undermining and maximum pressure, will only spoil the cooperative relationship. Historic opportunities will be missed, according to the white paper.

It stressed that trade deals must be equal and mutually beneficial, and China will never compromise on major principles concerning China's core interests.

One prerequisite for a trade deal is that the US should remove all additional tariffs imposed on Chinese exports and China's purchase of US goods should be realistic while ensuring that a proper balance in the text of the agreement is achieved to serve the common interests of both sides, according to the white paper.

TALKS BASED ON EQUALITY, MUTUAL BENEFIT

As the two largest economies and trading nations in the world, it is only natural that China and the US will experience some differences over trade and economic cooperation, according to the white paper. "What truly matters is how to enhance mutual trust, promote cooperation and manage differences."

Mutual respect means that each should respect the other's social system, economic system, development path and rights, core interests, and major concerns. It also means that one side should not cross the other's "red lines". The right to development cannot be sacrificed, still the less can sovereignty be undermined, according to the white paper.

As for equality and mutual benefit, the two sides in the consultations should operate on an equal footing, and results should be mutually beneficial. "Negotiations will get nowhere if one side tries to coerce the other or if only one party will benefit from the outcomes," the white paper reads.

READ MORE: Talks will be constructive if US is sincere, says China

Wang Shouwen said China was willing to settle trade friction through cooperation to achieve a win-win agreement, while stressing that China will not give ground on issues of principle.

Wang called on the United States to meet China half way, uphold the spirit of mutual respect, equality and mutual benefit, and jointly promote the stable and healthy development of bilateral economic and trade relations.

"If any agreement is reached, it should be based on equality and mutual benefit," he said.

China remains committed to its own cause no matter how the external environment changes. The fundamental solution to economic and trade tensions is to grow stronger through reform and opening up.

With the enormous demand from the domestic market, deeper supply-side structural reform will comprehensively increase the competitiveness of Chinese products and companies, according to the white paper.

Besides, the country still has sufficient room for fiscal and monetary policy maneuvers, so it can maintain sound momentum for sustainable and healthy economic development, it added.