'One yuan' vow for a slice of history 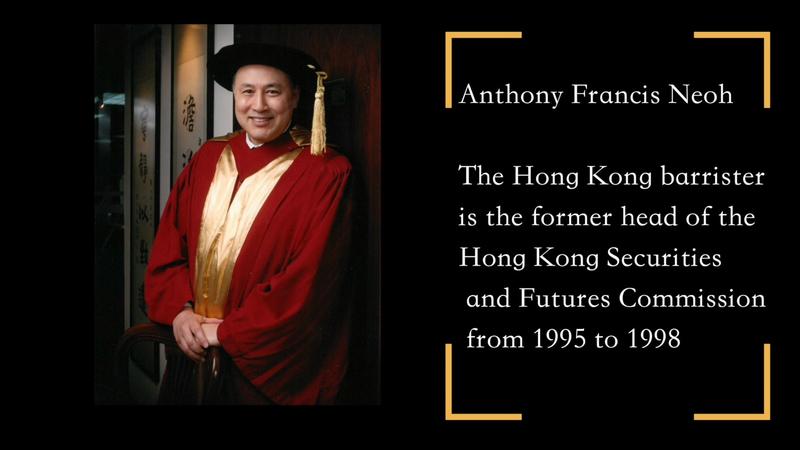 'If I'm consumed by ambition, I cannot attain my ideals. If I do not attain tranquility, I will not achieve lofty goals."

"If I could do something for the sound development of Chinese securities markets and legal system, it was my greatest pleasure"

The famous quote, attributed to Zhuge Liang - a distinguished statesman and strategist during the Three Kingdoms period of Chinese history from 220 to 280 - found its way into a piece of Chinese calligraphy adorning the wall of a prime office building in Admiralty, Hong Kong Island, standing in subtle harmony with the world of hustle and bustle outside.

It's the office of Anthony Francis Neoh - a renowned Hong Kong barrister with an endless, impeccable record of public service - who, with his characteristic smile, recalls his proactive involvement with China's four decades of reform and opening-up.

Just as Zhuge Liang, who devoted his life-long efforts to the founding and growth of the State of Shu in a turbulent time of Chinese history, Neoh, who adopts the celebrated quote as his motto in life, contributed his wisdom and strength during one of the country's most magnificent historic episodes that essentially paved the way for Chinese mainland companies to list in Hong Kong, and blazed a trail in the healthy development of China's securities markets and legal system.

Neoh, who headed the Securities and Futures Commission - Hong Kong's financial market watchdog - from 1995 to 1998, is widely remembered for serving as chief advisor to the China Securities Regulatory Commission between 1999 and 2004 at the invitation of former premier Zhu Rongji, with a nominal remuneration of 1 yuan a year.

His services earned him a place among seven prominent Hong Kong people named by President Xi Jinping as exemplary models in the SAR's zestful role in the nation's economic reform and opening-up process, when the president met a Hong Kong delegation in Beijing in November to give the city a ringing endorsement as being among the "miracle creators" of China's economic development.

"Forty years is a short span of time. During a mere four decades, China has transformed itself from an isolated backwater to a modern market economy at an unthinkable speed. This is a magnificent feat never seen before in human history," Neoh tells China Daily.

From Hong Kong's perspective, he points out, tremendous changes had begun to unfold since 1985 - the year the historic Sino-British Joint Declaration officially took effect, laying the groundwork for the city's return to the motherland and heralding a sea change on the horizon.

"One of the most unforgettable undertakings" was the good hard road Neoh had taken to turn the H-share market into reality.

In 1992, Neoh, who was then an executive of the Stock Exchange of Hong Kong - the predecessor of Hong Kong Exchanges and Clearing Ltd - headed north with then stock exchange chairman Charles Lee Yeh-kwong and other executives to lobby then vice-premier Zhu Rongji to allow mainland enterprises to go public in Asia's financial hub. 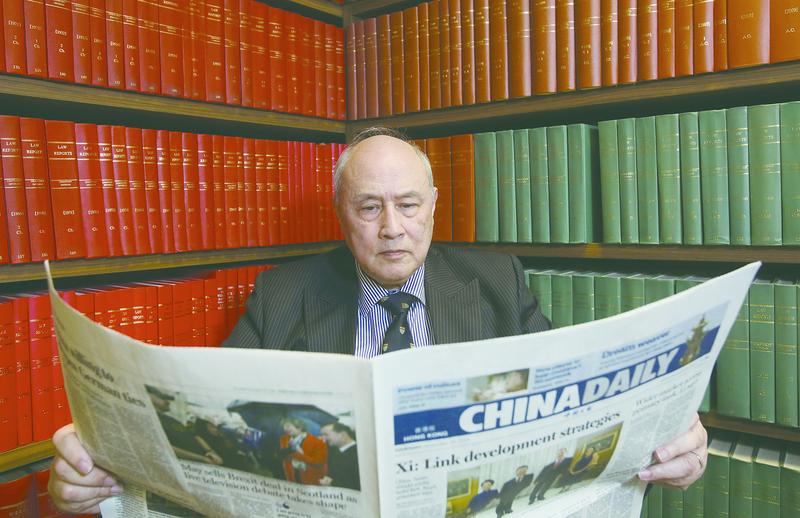 Over the past four decades, Neoh has woven part and parcel of his life into the fabric of most major historic moments as China embarked on the journey to set up its legal system almost from scratch. (PARKER ZHENG / CHINA DAILY)

China then had no securities law or contract law in black and white. In the belief that it might take another decade to get all the legal documents well prepared, Neoh and Lee vowed before Zhu to work out a legal framework with mainland counterparts within six months - a framework that would bring the mainland's legal system in line with Hong Kong's listing rules and which could also be widely accepted by international investors. If they made it, the deal is done.

It was the first meeting between Zhu and Neoh. In the following years, Neoh would have more close encounters with the down-to-earth leader that would eventually carve out a name for himself among a constellation of great minds behind the nation's momentous journey to economic prowess.

Zhu gave the nod to the plan almost instantly. Next came watching working groups from the mainland and Hong Kong toiling round the clock to devise a whole set of legal mechanism that's still in use today.

As a legal expert, Neoh undertook the major part of the work to design the mechanism and represented Hong Kong in negotiating with the mainland side.

The talks proceeded slowly. Due to a huge divergence of legal concepts on both sides, they had to sit down at the negotiation table almost every single day to shelve disputes and reach a consensus.

"It was a tough race against time. Sometimes, the talks would start at 9 in the morning and go on until 4 in the afternoon the next day," reminisces Neoh. "I buried myself in a mountain of work day and night, so much so I had to put my own business aside."

At the very start, some mainland officials took an "us versus them" attitude, giving top priority to safeguarding mainland systems and the interests of Chinese companies, while Hong Kong experts were more focused on protection for investors in the local market. This resulted in a deadlock.

Believing that such mentality would lead them nowhere, Neoh brusquely told a mainland official: "You shouldn't sit opposite me. We're here to collaborate with, rather than confront each other. We should sit together to work things out."

"Hearing that, the official stood up and sat by my side. This way, the talks began to make headway, enabling us to, ultimately, thrash out our differences and seal the deal," says Neoh.

In July 1993, Tsingtao Brewery - China's second-largest brewer founded in 1903 by German and British merchants - made history as the first mainland enterprise to float in the SAR in the first H-share listing, raising HK$900 million. 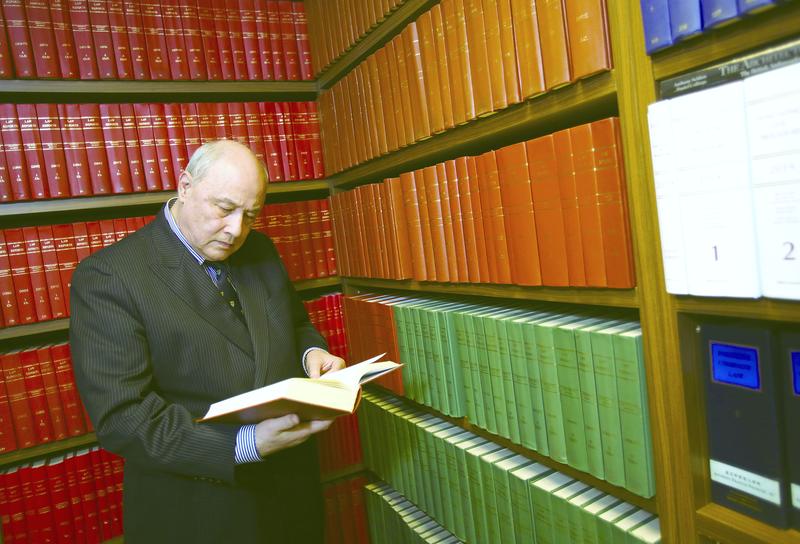 Over the past four decades, Neoh has woven part and parcel of his life into the fabric of most major historic moments as China embarked on the journey to set up its legal system almost from scratch. (PARKER ZHENG / CHINA DAILY)

At the listing ceremony, Lee and other Hong Kong stock exchange executives broke tradition, using beer, rather than champagne, for the toast.

By late last year, the market capitalization of H-shares had skyrocketed from HK$18 billion in 1993 to HK$5.9 trillion, with up to 267 listings contributing to a fifth of the total market value and more than one-third of overall turnover.

The much-awaited dawn of H-shares helped State-owned enterprises chart the course of catching up with Hong Kong and international standards in terms of disclosure and corporate governance. It also offers a historic chance for the city's stock market to grow from a regional market into a world-class player.

"The legal framework mapped out years ago proves to maintain its vigor and vitality in today's world," says Neoh. "Experts on both sides took the months-long talks seriously and dedicated their efforts to nailing down every detail of the framework. This gave birth to a legal mechanism whose practicability goes beyond time, and benefits us over decades."

Neoh's boldness and talent impressed Zhu. Just before stepping aside as SFC chairman, he received the invitation from the former top leader.

Neoh vividly remembers it as being on March 5, 1998 - the day when the first session of the ninth National People's Congress got underway, with Zhu elected as the country's new premier.

"He was extremely busy that day, but still managed to spare some time for me," Neoh recalls. "He asked if I could do him a favor to serve as the CSRC's chief advisor. I would be paid as much as my current annual salary, or even more."

"First, I must get the go-ahead from my wife. This is a prerequisite. Secondly, I wanted to negotiate the price. I asked for 1 yuan per year. No bargain."

"It was a well thought out and selfish decision," explains Neoh. "A remuneration of 1 yuan annually would allow me to stand aloof from any monetary employment relationship and adopt a more objective stance to contribute ideas. It ensured that my advice would not be biased from any personal interest."

Neoh took up the role of chief advisor at the CSRC in a way that somewhat underscores his pursuit of freedom from vanity and peace of mind as highlighted in his life motto.

Over a five-year span, his work revolved around offering macroscopic, directional and policy-based advice to the CSRC and the State Council. More often than not, he directly reported to Zhu in one-on-one meetings. 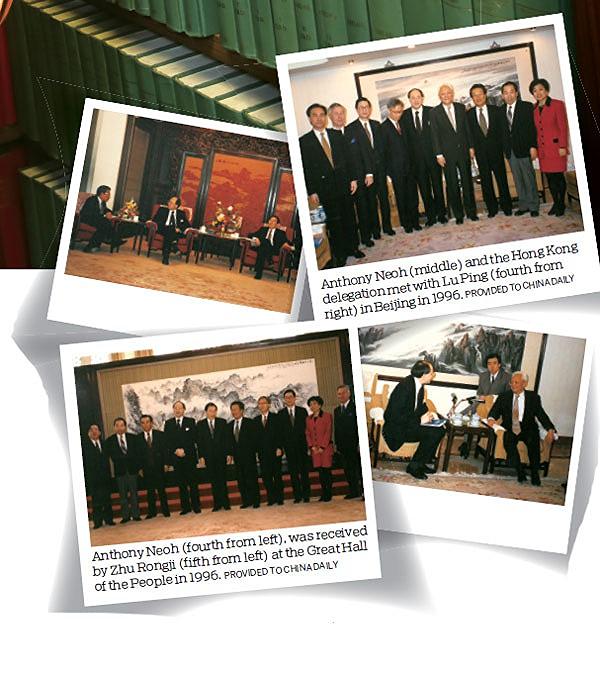 "We exchanged ideas in relaxed and casual conversations. There were some friendly arguments, which always ended up with receptive minds," he recalls.

Before quitting that post in 2004, some of his advice had been put into action. Others, like seeds of wisdom, were pregnant with a future change.

In a time embracing a daring, near iconoclastic spirit of change, Neoh remembers people's curious eyes when he was invited to lecture on Hong Kong's legal system in front of hundreds of mainland experts and officials at the newly-established Shenzhen University in 1985.

He recalls officials' thirst for knowledge and expertise when serving as one of the legal advisers to the Shenzhen government between 1988 and 1992.

His efforts put him on the front line of Shenzhen's early development. As he cheered on the city's growth from a gritty fishing village into a bustling metropolis whose skyline has turned almost unrecognizable, Neoh firmly believes in Hong Kong's "complementary role" in the country's development drive.

"Known for its international horizon, a well-established market without currency control and a society that puts people first, Hong Kong remains a book that mainland counterparts could take a leaf from for years to come."

Over the past four decades, Neoh has woven part and parcel of his life into the fabric of most major historic moments as the world's second-largest economy embarked on the journey to set up its legal system almost from scratch. Nowadays, he serves as a visiting professor at prestigious Chinese universities. Like always, most of his work has no pay, no remuneration.

The legal whiz, now in his 70s, attributes his dedication and hard work to the influence of his grandmother, who raised him.

His grandfather - an overseas Chinese in Honolulu - was the classmate and comrade-in-arm of Sun Yat-sen, and a member of the Chinese delegation led by the country's most distinguished diplomat Vi Kyuin Wellington Koo (Gu Weijun) during the Paris Peace Conference in 1919.

"Though educated in church schools, with English dominating my childhood and school years, the sheer attachment and devotion to the country was deeply rooted in my DNA," says Neoh.

"Back in 1998, I had an offer to be a visiting professor at the European University Institute in Florence. I thought I would spend the rest of my life enjoying Italian opera there. But a call from Premier Zhu changed my life trajectory.

"If I could do something for the sound development of Chinese securities markets and legal system, it was my greatest pleasure."