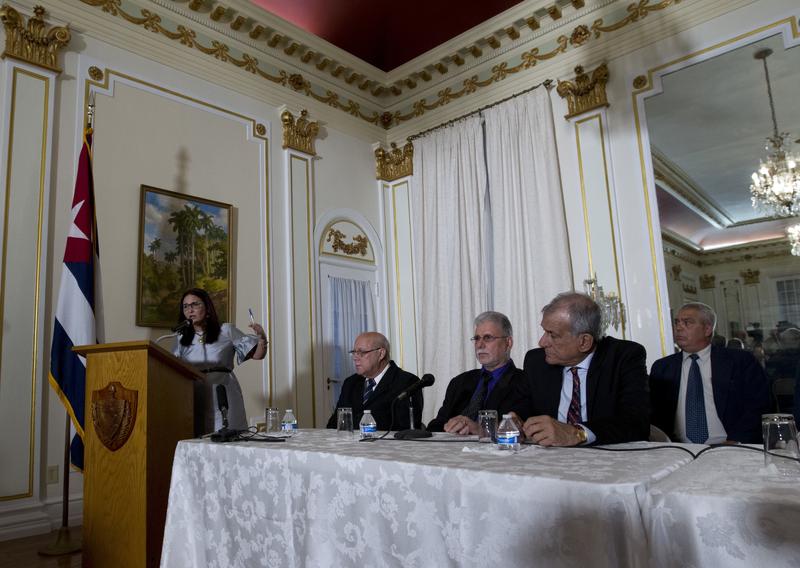 Deputy Director for North America at the Cuban Ministry of Foreign Affairs Johana Tablada speaks during a news conference about the mystery attacks on diplomats in Cuba at the Cuban embassy in Washington, Sept 13, 2018. (JOSE LUIS MAGANA / AP)

WASHINGTON — US and Cuban officials met at the State Department on Thursday to discuss the mysterious health problems that have affected more than two dozen American Embassy personnel, a situation that led to a reduction in staffing at the Havana mission and a chill in ties between the countries.

"There's a briefing taking place between some of our colleagues from our various bureaus. They are having meetings with the Cuban government to discuss some of the medical issues that our people have experienced," State Department spokeswoman Heather Nauert told a briefing.

Nauert, who declined to discuss details about the meeting, said the talks involved medical personnel and experts on the situation, as well as officials from the Cuban government.

Later on Thursday, Cuban members of the medical delegation that attended the meeting told reporters that they rejected the conclusion by US officials that the affected Americans' medical conditions were the same across the group.

ALSO READ: US, Cuba to meet on mystery 'health attacks' in Havana

"We are unable to collectively support the hypothesis of health attacks and brain damage to US diplomats as the explanations of the symptoms," the panel said.

They added, however that the illnesses were legitimate and may have had a psychological origin rather than a physical one.

"We cannot say it all can be explained by psychological challenges, but it cannot be discounted," said Pedro Antonio Valdés, a neuroscientist and one of the medical doctors on the panel.

At least 26 Americans have been affected by a mysterious illness at the US Embassy in Cuba with symptoms that included hearing loss, tinnitus, or ringing in the ears, vertigo, headaches and fatigue, a pattern consistent with mild traumatic brain injury, State Department officials have said.

The illnesses, which first appeared last year, were initially described as the result of sonic attacks or health attacks. 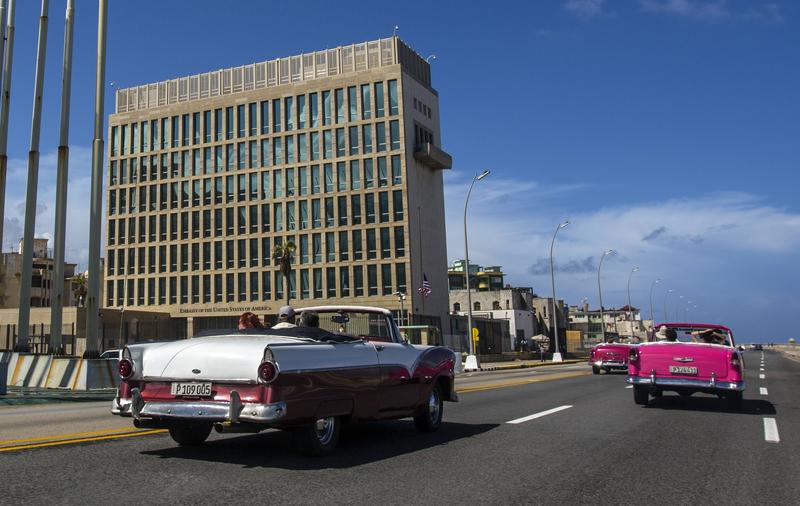 In this Oct 3, 2017, photo, tourists ride classic convertible cars on the Malecon beside the United States Embassy in Havana, Cuba. (DESMOND BOYLAN / AP)

But on Thursday, the Cuban doctors said their review of the evidence showed that only three individuals with mild to moderate hearing loss were found, which could have been from preexisting conditions.

They also said that the evidence reviewed failed to demonstrate brain damage, and that it proved that only two to three of the American subjects had cognitive dysfunction.

NBC News reported earlier this week that US officials believe the health problems may have been caused by sophisticated electromagnetic weapons.

NBC, citing administration officials and congressional aides, said the US military had been trying to reverse-engineer the type of weapons suspected of causing the damage. The FBI and intelligence agencies declined to comment on the NBC report.

Nauert said the State Department has made no determination about who or what caused the health attacks. Cuban officials have denied involvement.

"Why do we have to look at the far-fetched hypothesis that some mysterious weapon was used to attack the Americans," he added, citing the need for a new explanation and his willingness to discuss the science behind the US findings in future meeting hosted in Havana.

The State Department said in June that it had brought home a group of diplomats from Guangzhou, China, over concern they were suffering a similar malady.

In April, Canada said it would remove the families of diplomats posted at its embassy in Cuba due to concerns about a new type of brain injury.

The United States has reduced embassy staffing in Cuba from more than 50 to a maximum 18, forcing those who remain to take on multiple jobs.

The Government Accountability Office said in testimony to Congress last week that the State Department was having "management challenges" responding to the incidents.