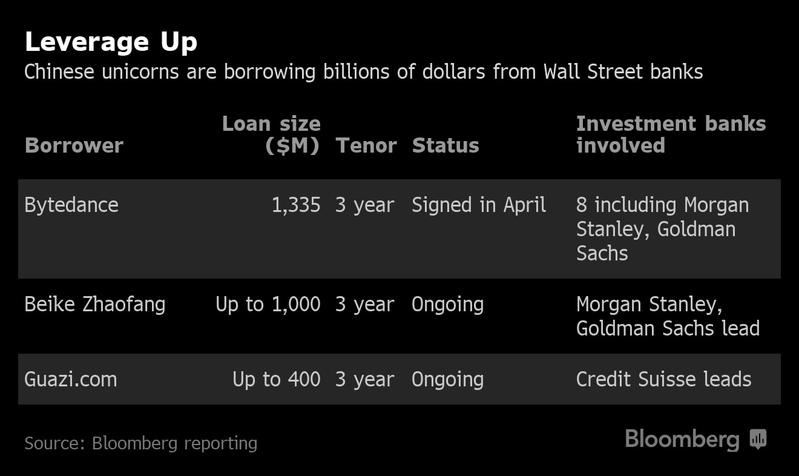 Wall Street banks are taking their unicorn playbooks to China.

After arranging billions of dollars in loans for highly valued -- and money-losing -- US startups like Uber Technologies Inc, banks including Morgan Stanley and Goldman Sachs Group Inc are angling to do the same for some of China’s biggest unicorns. They helped Bytedance Ltd, owner of the wildly popular TikTok video app, borrow US$1.3 billion in April and are said to be raising as much as US$1.4 billion for two other Chinese tech startups -- borrowers that until recently had rarely tapped the syndicated loan market.

Banks are betting the loans will lead to more lucrative mandates like initial public offerings, just as they did in the US with mega-listings by Uber and several of its peers

Banks are betting the loans will lead to more lucrative mandates like initial public offerings, just as they did in the US with mega-listings by Uber and several of its peers. But that’s no guarantee as trade tension between China and the US spreads to the technology industry, heightening investor concerns over frothy valuations.

While banks earned an average margin of 145 basis points over benchmark rates on five-year syndicated loans for Chinese borrowers this year, the juiciest fees come from follow-on services like equity issuance. Underwriters have charged 5 percent to 6 percent of the float value for US debut share offerings in recent years and between 2 percent and 3 percent in Hong Kong, though fees are sometimes lower for larger offerings, according to data compiled by Bloomberg.

“The returns on these loans are usually acceptable, given that leverage tends to be low and given the expected future cross-sell opportunities, including future capital markets and trade financing,” said Benjamin Ng, head of Asia Pacific debt syndicate and acquisition finance at Citigroup Inc in Hong Kong.

Morgan Stanley, the lead sponsor of Uber’s IPO in May, earned US$41 million from that deal, about a year after the bank helped arrange a US$1.1 billion loan for the ride-hailing company, according to data compiled by Bloomberg. Dropbox Inc tapped banks including Goldman for a US$600 million credit facility in 2017, people familiar with the matter said at the time, about a year before the cloud storage company went public. Goldman was one of the IPO’s lead underwriters. 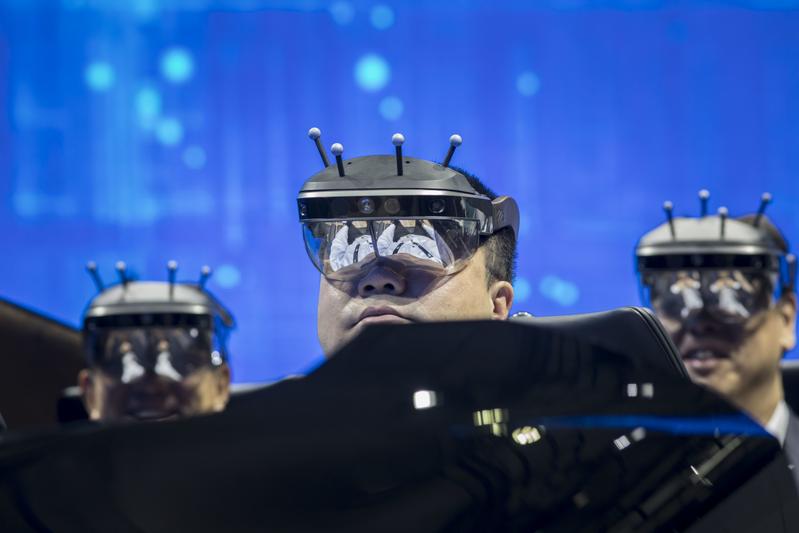 “Banks have gotten a lot more comfortable lending to these asset-light companies,” said Vey-Sern Ling, an analyst at Bloomberg Intelligence in Hong Kong. “If your competitor is lending to these billion-dollar startups, you can’t not be there.”

Goldman Sachs declined to comment while Morgan Stanley didn’t reply to requests for comment. They were bookrunners on Bytedance’s loan and are now leading a facility of as much as US$1 billion for Beike Zhaofang, which runs an online property brokerage.

Loans appeal to Chinese unicorns because they can be arranged quickly with few public disclosures, a plus for young companies that want to avoid giving away too much information to competitors

Loans appeal to Chinese unicorns because they can be arranged quickly with few public disclosures, a plus for young companies that want to avoid giving away too much information to competitors, according to Andrew Ashman, the Singapore-based head of loan syndicate for Asia Pacific at Barclays Plc.

Bytedance and Beike declined to comment. So did Guazi.com, an online marketplace for used cars that’s in talks with banks to borrow as much as US$400 million, according to people familiar with the matter.

While Barclays predicts similar deals will emerge in the second half, there are plenty of headwinds. Chief among them is the escalating China-US conflict, which has expanded beyond tariffs in recent months to encompass parts of the tech industry and threatens to weigh on global economic growth.

That’s adding to investor jitters about overstretched valuations for companies with unproven business models. Uber and rival Lyft Inc are both trading below their IPO prices, while Luckin Coffee Inc -- a Chinese rival to Starbucks Corp that reported a loss of about US$241 million last year -- has dropped 15 percent from its post-IPO high earlier this month. The MSCI China Technology Index has slumped more than 20 percent over the past year.

If the US-China spat drags on, banks could be waiting a long time for their unicorn paydays.