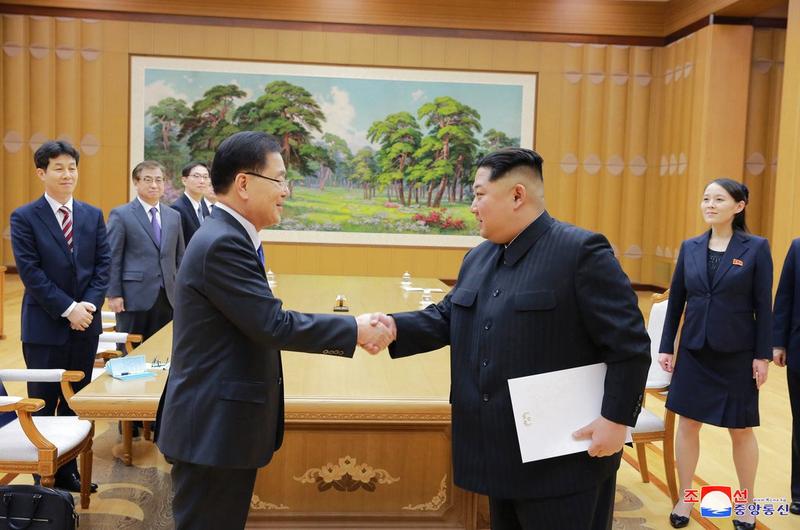 In this March 5, 2018 photo, provided by the DPRK government on March 6, DPRK's leader Kim Jong-un, front right, shakes hands with ROK's National Security Director Chung Eui-yong after Chung gave Kim the letter from ROK's President Moon Jae-in, in Pyongyang, DPRK. The content of this image is as provided and cannot be independently verified. Korean language watermark on image as provided by source reads: "KCNA" which is the abbreviation for Korean Central News Agency. (KOREAN CENTRAL NEWS AGENCY / KOREA NEWS SERVICE VIA AP)

PYONGYANG/SEOUL - The Democratic People's Republic of Korea (DPRK) showed willingness to hold talks with the United States about issues including the denuclearization of the Korean Peninsula, and agreed on the third summit meeting with the Republic of Korea next month, the Blue House of the ROK said Tuesday.

The DPRK confirmed its will to denuclearize the peninsula, making it clear that if military threat toward the country is removed the DPRK has no reason to possess its nuclear program

Chung Eui-yong, top national security adviser for ROK President Moon Jae-in, told a televised press briefing that the DPRK side expressed its willingness to talk candidly with the United States about the denuclearization issue and normalized ties between Pyongyang and Washington.

The DPRK confirmed its will to denuclearize the peninsula, making it clear that if military threat toward the country is removed and its regime safety is guaranteed, the DPRK has no reason to possess its nuclear program, the senior Blue House official said.

Chung returned home earlier in the day after making a two-day visit to Pyongyang, where he met top DPRK leader Kim Jong-un on Monday night together with four other special envoys, including Suh Hoon, director of the National Intelligence Service (NIS), the ROK's spy agency.

READ MORE: ROK delegation in DPRK to mediate talks with US

As long as dialogues continue, the DPRK will conduct no strategic provocation, including a nuclear test and ballistic missile test launches, without fail, while using no weapons, both conventional and nuclear, toward the ROK.

The first and second inter-Korean summit meetings were held in Pyongyang in 2000 and 2007 respectively.

Working-level talks for preparations for the third meeting between the leaders of the two Koreas will be held going forward.

The two sides also agreed to set up a hotline between the leaders to ease military tensions. The first talks through the hotline will be held before the summit scheduled for late April.

The Korean Central News Agency (KCNA) reported Tuesday that Kim had made "a satisfactory agreement" with the ROK envoy over the Moon’s intention for a summit.

"Hearing the intention of President Moon Jae-in for a summit from the special envoy of the south side, he (Kim) exchanged views and made a satisfactory agreement," according to KCNA.

"He (Kim) gave the important instruction to the relevant field to rapidly take practical steps for it," it said.

During the meeting, Kim also praised the Pyeongchang Winter Olympics as a "very important occasion in demonstrating the stamina and prestige of our nation at home and abroad and providing a good atmosphere of reconciliation, unity and dialogue" between the DPRK and the ROK.

Chung handed Kim a personal letter from Moon, according to the report.