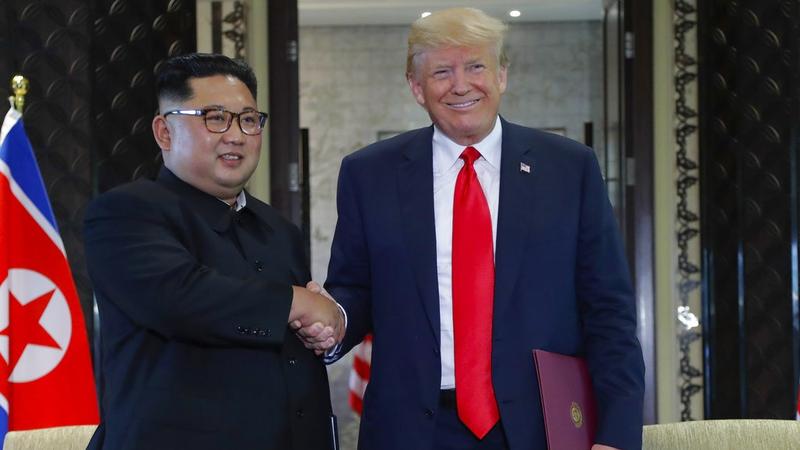 DPRK leader Kim Jong-un (left) and US President Donald Trump shake hands after a document signing at the Capella hotel on Sentosa island on June 12, 2018 in Singapore. (EVAN VUCCI / AP)

SEOUL/WASHINGTON - A letter from US President Donald Trump has been sent to Kim Jong-un, top leader of the Democratic People's Republic of Korea (DPRK), over the weekend, US media reported on Monday.

The letter "was flown to Pyongyang and delivered by hand," reported CNN citing an anonymous source whom the cable network said was familiar with the ongoing negotiations between the two sides.

The US and DPRK are expected to finalize the date and location of a second summit between Trump and Kim Jong-un, the Chosun Ilbo reported

It has also been reported that Kim Yong-chol, vice chairman of the ruling Workers' Party of Korea (WPK) Central Committee, may meet US Secretary of State Mike Pompeo later this week in Washington.

The meeting would happen on Thursday or Friday, the Chosun Ilbo said, citing an unnamed diplomatic source familiar with the talks.

Both sides are expected to finalize the date and location of a second summit between Trump and Kim Jong-un, and the North's envoy is likely to meet Trump, the paper said.

Washington and Pyongyang have been working on details of the expected second Trump-Kim meeting.

Kim said last week during his stay in China that his country will make efforts for the second summit to achieve results that will be welcomed by the international community.

Trump said earlier this month that he expected to meet Kim in the "not-too-distant future," after receiving a "great" letter from the top DPRK leader.

The US embassy in Seoul did not immediately comment on the reports. While the White House had offered no immediate comment on the earlier ROK newspaper report, a State Department official responded, "We don't have any meetings to announce."

Chinese Foreign Ministry spokesperson Lu Kang said at a daily briefing on Friday that China always encourages the DPRK and the United States to meet each other half-way and resolve their own concerns through dialogue and consultation.

"China will as always play a positive role to this end," Lu added.

If confirmed, this week's meeting could mean the two sides are nearing a compromise after a months-long standoff over how to move forward in ending DPRK's nuclear and missile programs. 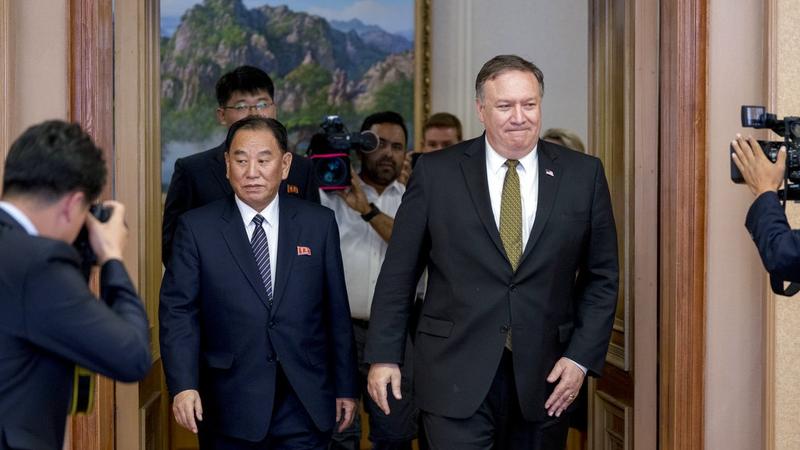 US Secretary of State Mike Pompeo, right, and Kim Yong-chol, left, a senior official of the Democratic People’s Republic of Korea (DPRK), return to discussions after a break at Park Hwa Guest House in Pyongyang, July 7, 2018. (ANDREW HARNIK / POOL / AP)

The relations between the DPRK and the United States improved last year. Trump and Kim had their first summit in Singapore in June.

Contact was resumed after Kim's New Year's speech, in which he said he was willing to meet Trump "at any time," the ROK's ambassador to the United States, Cho Yoon-je, told reporters last week.

Meanwhile, differences between the two sides remained over key issues including the scale of denuclearization, US sanctions and whether to issue a war-ending declaration.

A ROK senior official said a second summit between Trump and Kim might happen in late February or early March, though "No one knows what Trump is thinking."

"At the second summit, they'll probably focus on reaching a possible interim deal, rather than a comprehensive roadmap for denuclearization," said Cheong Seong-chang, a senior fellow at ROK's Sejong Institute.

"Whether Pyongyang is willing to abolish ICBMs, in addition to disabling the Yongbyon complex, would be key, and if so, the North will likely demand sanctions relief in return."