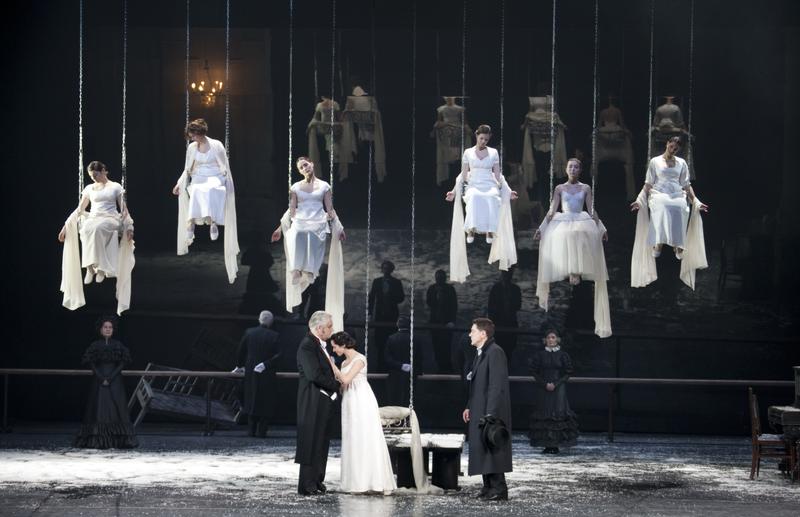 Young ballerinas dancing midair from a scene in Eugene Onegin, a play presented by the Vakhtangov State Academic Theatre of Russia that will run in the Tianqiao Performing Arts Center in Beijing from Thursday to Sunday. (PHOTO / CHINA DAILY)

As seen on the poster for the Vakhtangov Theatre's production of Eugene Onegin, young ballerinas perform in midair from swings suspended high above the stage as the play unfolds beneath them.

"I highly recommend the play to everyone who yearns for beauty and poetry. You will experience the ultimate height of theater art ..."

Following four full-house performances at the SAIC Shanghai Culture Square from May 9 to 12, the Russian company－whose full title runs to the Vakhtangov State Academic Theatre of Russia－will head to the Tianqiao Performing Arts Center in Beijing to stage four consecutive shows from Thursday to Sunday.

The poetic vision of the poster reflects the aesthetic and lyrical tone set out for the play by Lithuanian director Rimas Tuminas, a popular and respected figure among Chinese audiences.

Last year his plays The Three Sisters and Masquerade were presented during the Modern Drama Valley in Shanghai, and this year, while his creation The Government Inspector was staged at the Daning Theater on the same day Eugene Onegin premiered in Shanghai. 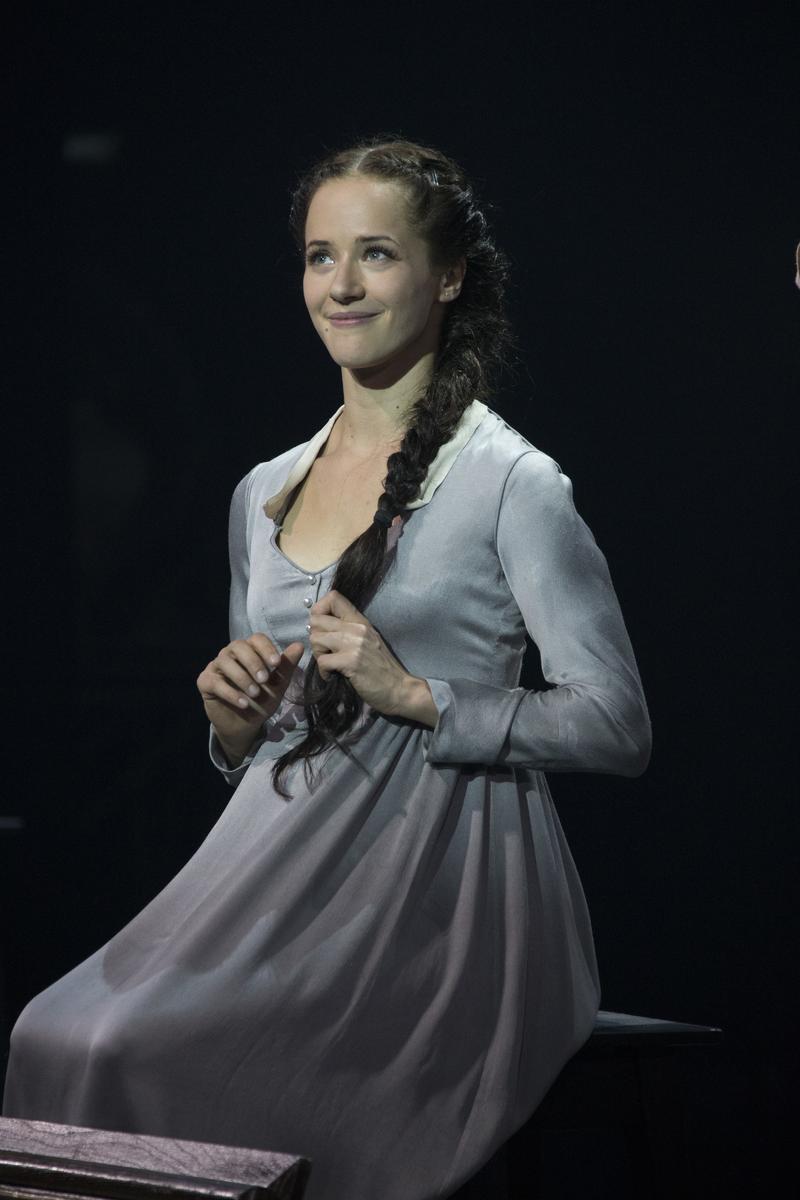 "I highly recommend the play to everyone who yearns for beauty and poetry," she says. "You will experience the ultimate height of theater art, as the combination of literature, visual art, performance, music and dance."

The play is based on a novel in verse by Alexander Pushkin (1799-1837), a classic of Russian literature. The story follows Onegin, a bored dandy who rejects the high society of St. Petersburg in favor of a life in the countryside. Selfish and lacking empathy, he rejects the love of a young admirer, Tatyana, and ends up killing his friend in a duel.

Years later, an older Onegin looks back and finds himself consumed by loss and remorse. He visits Tatyana, who is now married to a general, and asks her to elope with him. Tatyana admits that she still loves him but rejects him in her determination to remain faithful to her husband. Onegin is left wallowing in his loneliness, unable to find meaning in his life.

Tchaikovsky composed the opera Eugene Onegin in 1879, which has since been widely performed and is familiar to the public. Tuminas, however, doesn't adopt the music from the opera, believing it to be an unfaithful interpretation of Pushkin's work. 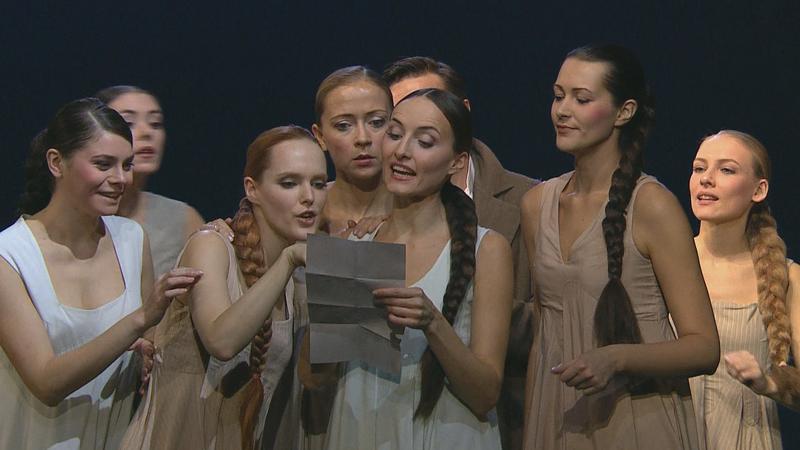 Young girls in the country, played by the ballet's dancing girls, read the letter by Tatyana. (PHOTO / CHINA DAILY)

Also, "in the Soviet period, Onegin was portrayed as a hero, who gives up high society to live in the country, close to the ordinary people, but that is not true of the character," he says. To his understanding, Onegin is a failure in life. He is selfish and indifferent, unable to relate to the feelings of other people. In contrast to his cruelty and lack of empathy, Tatyana is vulnerably sincere. Pushkin's creation of Tatyana embodies the "soul and character of Russia", Tuminas believes.

So in his production, the director chooses to focus on portraying Tatyana's love for Onegin. Only through this portrayal of the heroine, "can we realize the transformation from literature to theater", Tuminas asserts.

As a theater director, Tuminas is convinced that a well-designed set and strong performances by the actors are all that is required to present a fine play, and high-tech techniques such as video projection are unnecessary. "I believe actors can fill up the space on the stage with their performances," he says. "The stage set has a great impact on the actors, too."

In the play, Tatyana is portrayed by Olga Lerman over a period spanning decades, as she evolves from an innocent youth into a resilient mature woman. The role of Onegin, however, is played by two actors, as the play unfolds through the older Onegin's recollections of his life and times, explains Aleksei Guskov, an award-winning actor who plays the older Onegin. 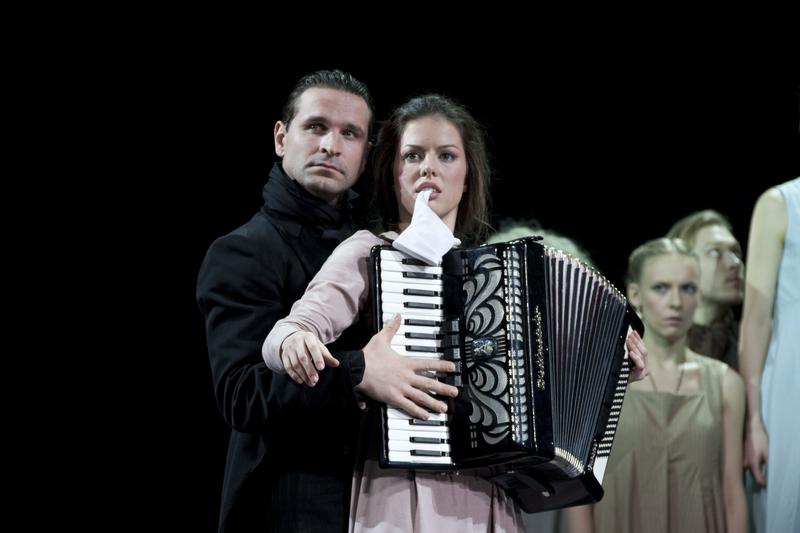 In Russia, girls begin ballet lessons from an early age. "It's part of our history, like Chinese children practicing martial arts. That's why I decided to have young ballet dancers in the play. It's a reference to Russian history and culture," Tuminas says.

The 67-year-old Lithuanian is the first non-Russian artistic director of the Vakhtangov Theatre, one of the largest companies in Moscow established in 1921. His direction of Eugene Onegin earned him the Golden Mask award at the Russian Festival of Performing Arts in 2014.