'China, US have least discord on people-to-people exchanges' 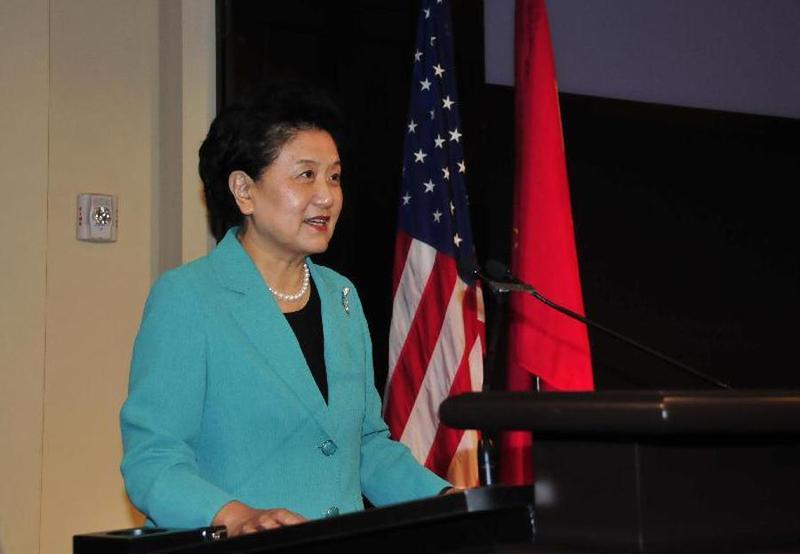 NEW YORK – Chinese Vice-Premier Liu Yandong has said China and the United States should enhance people-to-people exchanges to build stronger ties as it is where the two countries "have the least disagreements and the most consensus."

Liu made the remarks in a keynote speech at the opening ceremony of the China-US University Presidents and Think Tank Forum at Columbia University Tuesday in New York City.

"We hope that universities and think tanks of the two countries will carry out strategic and forward-looking research and jointly cultivate high-quality talents so as to make positive suggestions for the development of China-US relations," Liu said.

The upcoming China-US social and people-to-people dialogue will further boost the understanding and friendship between the two peoples and help maintain the momentum for the healthy and stable development of bilateral relations in the long term, Liu said.

Liu will co-chair the dialogue with US Secretary of State Rex Tillerson in Washington on Thursday. It is one of the four high-level dialogue mechanisms established during a meeting between Chinese President Xi Jinping and US President Donald Trump in April.

Noting the year of 2017 marks the 45th Anniversary of the release of the Shanghai Communique, Liu said the China-US relations have been developing steadily despite ups and downs over the past 45 years.

She added that bilateral ties have not only brought tangible benefits to the two peoples, but also made important contributions to peace, stability and prosperity in the Asia-Pacific region and the world at large.

The vice premier noted that a four-point inspiration can be drawn from the development of the China-US relations.

Secondly, mutual benefit and win-win cooperation. The two sides should always focus on common interests and continue broadening areas of cooperation, she said.

READ MORE: China, US to join forces on economy

Thirdly, seeking common ground while shelving differences, striving for harmony but not sameness. Differences in opinions on certain issues should not be taken as excuses for confrontation and conflict between the two sides, instead the two countries should constantly expand their common ground and explore cooperation potentials through dialogue and communication, Liu said.

Fourthly, strengthening friendship for coexistence and sharing. The two sides should continue to enhance people-to-people exchanges to consolidate the foundations of society and public opinions for a stronger relationship.

Calling the upcoming 19th National Congress of the Communist Party of China (CPC) a milestone in China's development, Liu said that the event would lay out a strategic plan for the work of the Party and the country in the next five years or an even longer period.

China has made remarkable achievements in the past five years under the leadership of the CPC Central Committee with Xi at the core, she said.

The vice premier said China will unswervingly follow the path of socialism with Chinese characteristics and the path of peaceful development while pursuing opening-up strategy featuring mutual benefits.

"We are willing to work with countries around the world to jointly build a new type of international relations focusing on win-win cooperation, and a community of shared future for mankind," Liu said.