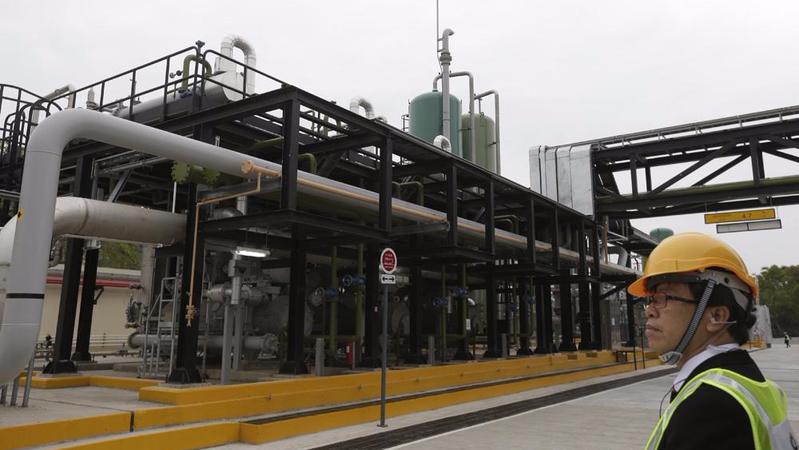 An engineer checks out the largest landfill-gas conversion facility of its kind in Asia, run by Towngas, at the Tseung Kwan O plant on Friday. (Roy Liu / China Daily)

The HK$350 million project in Tseung Kwan O at the South East New Territories (SENT) Landfill will raise the city’s renewable-energy usage to 5 percent by turning surplus landfill gas into synthetic natural gas, according to statistics from the Hong Kong and China Gas Company, or Towngas.

The landfill gas collected will be converted into synthetic natural gas on-site and transmitted to the off-take station in Tseng Lan Shue through a 12-kilometer pipeline before integrating into the gas supply network.

The gas conversion facility, designed and manufactured locally, is the largest of its kind in Asia, according to Alfred Chan, managing director of Towngas.

The company does not expect a profit but will not raise gas price after launching the project, Chan added. The company will take 15 years to cover the cost of the facilities.

Speaking at the opening ceremony, Secretary for the Environment Wong Kam-sing said the launch of the SENT Landfill project marks a key milestone in waste-to-energy development in Hong Kong. It was another “excellent example” of green partnership between the government and energy sector.

According to official strategy, the government aims to reduce carbon intensity by between 65 and 70 percent by 2030 compared with the 2005 level, which was 0.027 kilograms of CO2 per for HK$1 of GDP. The city’s greenhouse gas emissions in 2005 were 41.2 million tons.

Treatment facilities at SENT Landfill include a landfill gas compressor and desulfurizer, a low-temperature (-25 C) purifier and a pressure swing absorption transformer, altogether producing a maximum 8,000 cubic meters of synthetic natural gas per hour, according to Towngas statistics.

Before launching the gas-conversion project, the landfill gas generated at the SENT Landfill was used only for generating electricity and as fuel used on-site. The North East New Territories Landfill has been collecting landfill gas for energy source since 2007.

The government on Wednesday assigned the city’s first waste-incineration project in Shek Kwu Chau, South East Lantau – the Integrated Waste Management Facilities Phase 1 – to the China Harbour Engineering Company. The project aims to incinerate 3,000 tons of waste a day and generate about 480 million units of electricity a year, according to official statistics.