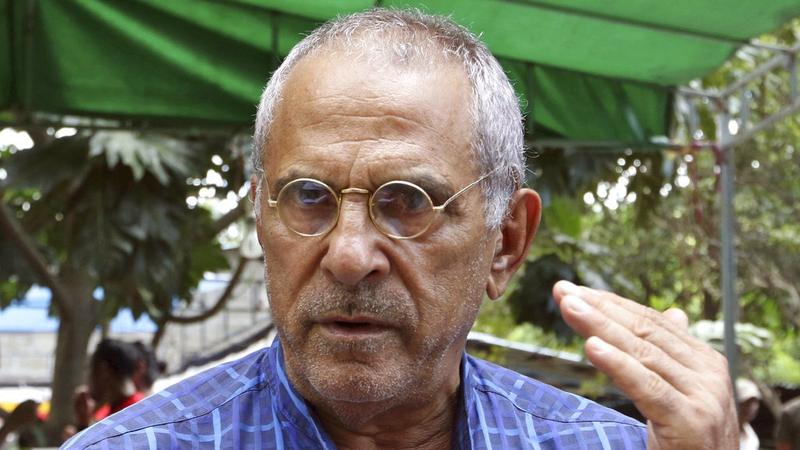 In this April 14, 2018, photo, Nobel peace prize laureate and former East Timorese President Jose Ramos-Horta talks to journalists in Dili, East Timor. Ramos-Horta waded back into the young country's politics ahead of parliamentary elections next month, calling the government a total failure in the past decade in crucial areas such as reducing child malnutrition and providing clean water. (KANDI BARNEZ / AP)

DILI, East Timor — Nobel Peace Prize laureate and former East Timorese President Jose Ramos-Horta has waded back into the young country's politics ahead of parliamentary elections next month, calling the government a total failure in the past decade in crucial areas such as reducing child malnutrition and providing clean water.

The study by the UN on our social economic indicators, particularly on malnutrition and children's growth are extremely negative, I'd say total failure over the last 10 years

Ramos-Horta, joint recipient of the 1996 Nobel prize for efforts to bring independence and peace to East Timor, is not a candidate in the elections but has declared support for the Fretilin party, which led a short-lived minority government that collapsed at the start of this year.

The May 12 vote, East Timor's second parliamentary election in less than a year, will pit a loose grouping of Fretilin and one minor party against a formal alliance of three parties led by the National Congress for Timorese Reconstruction party of independence hero Xanana Gusmao, a giant in East Timor's politics who was its first president, from 2002 to 2007, and prime minister from 2007 to 2015.

"If I had been a prime minister for 10 years, I would have focused all those 10 years on quality education, on rural development and that means water and sanitation for the people," Ramos-Horta said in a recent interview with The Associated Press.

"The study by the UN on our social economic indicators, particularly on malnutrition and children's growth are extremely negative, I'd say total failure over the last 10 years," he said.

Though partisan, Ramos-Horta's comments underline the challenges facing East Timor, which for the past decade has focused on infrastructure projects and a dwindling oil fund to boost its economy but has made little progress in addressing poverty in rural areas where nearly 70 percent of East Timorese live.

The UN estimates nearly half the population lives below the extreme poverty line of US$1.90 a day and half of the children under 5 suffer moderate to severe physical and mental stunting as a result of malnutrition.

East Timor was occupied for a quarter-century by Indonesia, which invaded in 1975 just days after Fretilin — the Revolutionary Front for an Independent East Timor — declared the eastern half of Timor island independent from Portugal, the colonial power. East Timor gained independence after a UN-sponsored referendum in 1999 but reprisals by the Indonesian military devastated the nation. Today, politics remain dominated by a handful of men who were key figures in the so-called "1975 generation."

Ramos-Horta, who was president from 2007 to 2012, said the nation of 1.3 million people has made "tremendous progress" in establishing consistent rule of law and consolidating its democracy, among the newest in the world. Presidential and parliamentary elections last year were the first held without the supervision of UN peacekeepers.

But in other areas it has gone astray, he said, such as not focusing the education system on vocational training that would give young Timorese skills that are useful for a developing country.

"You will be better paid with a vocational certificate in electricity or plumbing than if you show up with your Ph.D. in humanities. So it has been very wrong from the start, since independence. I hope the next government can change that," he said.

Neither Fretilin nor Gusmao's party, known as CNRT, can by themselves win an outright majority of votes, but Gusmao appears to have gained an advantage by forming an alliance with smaller parties. After 2012 elections in which CNRT was the biggest party but short of an absolute majority, it eventually settled into a national unity coalition with Fretilin.

Gusmao recently received a boost to his popularity after leading negotiations that settled the sea border between East Timor and Australia. They also provisionally agreed on formulas for division of oil and gas riches beneath the sea bed. Thousands of East Timorese lined the road to the capital's international airport in early March to cheer a returning Gusmao after the deal was signed at the United Nations.

Ramos-Horta said Gusmao, whose CNRT suffered a drop in votes in the 2017 elections, becoming the second-biggest party after Fretilin, is a "good man" who cares about his country but may have been in politics too long.