Careers on the right track - Racing toward opportunity

By Yang Han in Abu Dhabi 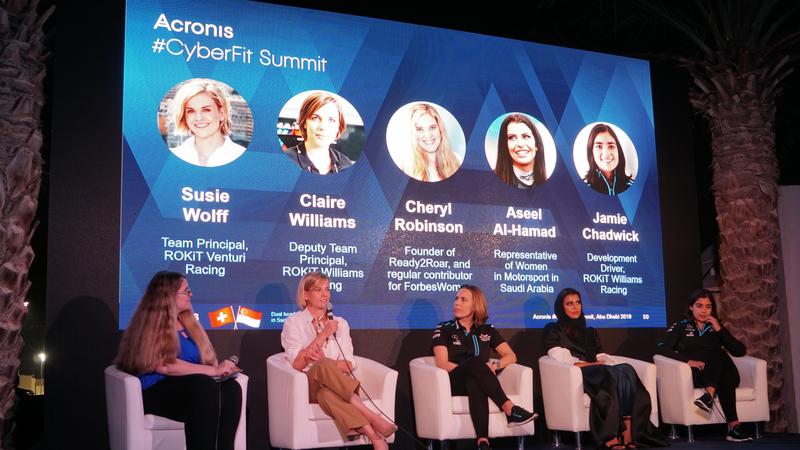 Female leaders in the motorsports industry discuss opportunities for women in the industry at the Acronis CyberFit Summit in Abu Dhabi on Nov 28, 2019. (YANG HAN / CHINA DAILY)

Women can now play a bigger role in tech and motorsports as more opportunities open up, industry leaders told a summit on Nov 28.

The motorsports industry has recently gone through huge change with more jobs becoming available to young girls and women, said Susie Wolff, team principal of ROKiT Venturi Racing, during a panel session at the Acronis CyberFit Summit in Abu Dhabi, capital of the United Arab Emirates, on Nov 28.

The event was held by Acronis, a global cyber protection company headquartered in Switzerland and Singapore. Under the theme Women in Tech, the panel brought together female motorsports figures to discuss women’s influence in tech and motorsports.

A major problem in motorsports is the lack of female talent, said Wolff, who became the first woman to take part in an official Formula One race weekend session in 22 years at the British Grand Prix in 2014.

Referring to the Girls On Track event held on Nov 21-22 in Saudi Arabia during the E-Prix– the first of its kind promoting gender equality in motorsports in the Middle East – Wolff said such initiatives are key to making the industry more accessible to young girls, especially as it is still a male-dominated sport.

An E-Prix race is equivalent to a Grand Prix in F1 but for electric cars. Launched by the International Automobile Federation in February, the Girls On Track initiative aims to build the confidence of females aged 8 to 18 and to inspire them with new career opportunities.

“This is not about finding recent drivers for (the motorsports industry),” said Wolff. “It is about opening up the whole sports (sector) to make sure that every aspect of sports is getting girls coming in.”

As for motorsports, career opportunities for females go beyond just being a driver, said Wolff, noting there are diverse career paths for women in the industry. A racing event generally requires thousands of workers, including technicians, engineers and media professionals, she added.

Roles like engineers in motorsports are crucial as they must monitor data collected from thousands of sensors to protect the car, said Claire Williams, deputy team principal of ROKiT Williams Racing, one of the world’s leading F1 teams.

“Formula One, at the end of the day, especially at this age, is about data and we need to protect that data,” said Williams.

On the other hand, “women in business have very different needs and experiences from men in the industry, and it is very important that those needs are recognized by the business that employs them,” she said.

Jamie Chadwick, development driver at ROKiT Williams Racing, said she was unaware of how few females were involved in motorsports when she first drove a go-kart at the age of 12. Now, incredible opportunities are opening up and more women are getting involved, she added.

“If you want to get involved, don’t let anything stop you,” said Chadwick, the first female driver to win a British Racing Drivers' Club (BRDC) British Formula 3 championship race, a motorsports series in the United Kingdom.

Echoing Chadwick’s view, Aseel Al-Hamad from Saudi Arabia said women who are interested in motorsports must dream big and approach it step by step.

On June 24, 2018, the same day Saudi Arabia lifted the driving ban on women, Al-Hamad took a celebratory lap in a 2012 Renault F1 car around the Le Castellet circuit in the south of France ahead of the French Grand Prix.

“The driving ban was a very particular thing in Saudi Arabia and it was actually my biggest challenge (to become a female motorsports driver),” said Al-Hamad, noting the lifting of the ban changed women’s life in her country. Motorsports is now Saudi Arabia’s fastest-growing sports sector in terms of women’s participation, she added.

“It is not just about driving. It is about empowerment, about leadership,” said Al-Hamad.

Having faced direct discrimination during her career, Wolff of ROKiT Venturi Racing said hard work, resilience, self-belief and not letting distractions get in the way are key to women achieving success in the industry.

“The hard work will pay off and you will achieve what you want to achieve,” said Wolff.

The panel session was hosted by the Acronis Cyber Foundation, a charitable organization under Acronis that has built schools in various countries, including Myanmar, Cambodia, Senegal and Tanzania.

“Empowerment through education for girls is particularly important for us,” said Leoni Rossberg, ACF’s project manager, noting the foundation requires at least 55 percent of students to be girls in each school that receives a donation.

Women are dominating degree programs in science, technology, engineering and mathematics, or STEM, but only 3 percent of female students would consider technology as their first career choice, while women hold only 25 percent of computing jobs, according to Adeva, a developers network.

Rossberg said the foundation will continue to build schools, with more tech-related investment planned for next year “in order to help children break the cycle of poverty”.

“We believe that knowledge should be available to all, and a better world is based on educated children,” she said.