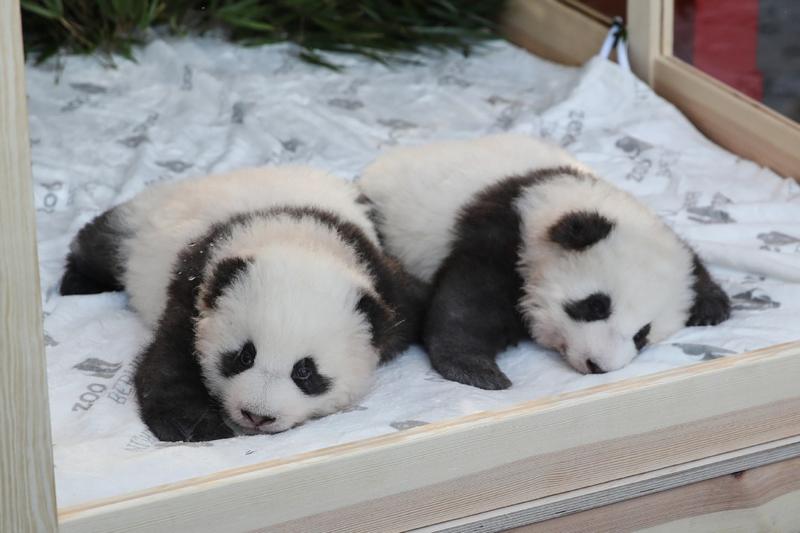 BERLIN — The first-ever twin panda cubs born in Germany -- in Berlin Zoo -- were named Meng Xiang and Meng Yuan after they turned 100 days old on Monday.

The twins, both male, were born on Aug 31 to six-year-old Meng Meng and her partner Jiao Qing, sent by China to Germany in 2017.

At a press conference held in Berlin Zoo with the two cubs wheeled out in a glass-cased "panda bed", Chinese Ambassador to Germany Wu Ken said that, put together, the two names meant "beautiful dreams come true."

We have waited a long time for this joyful occasion

He said the names for the panda cubs were chosen to "convey our best wishes for the friendship between our two countries and two peoples."

According to the ambassador, the year 2019 has seen 60 pandas born across the world, 57 of which survived, including the two at Berlin Zoo. This success story should be attributed to concerted efforts made by scientific teams from both China and Germany, Wu said.

In August, China's Chengdu Research Base of Giant Panda Breeding dispatched two experts to work side by side with panda breeders and caretakers here in Berlin.

"We have waited a long time for this joyful occasion," said Andreas Knieriem, director of Berlin Zoo, adding that "our two panda boys keep making us smile despite the gloomy December weather."

Berlin Mayor Michael Mueller said that "all animal and zoo fans in Berlin have been following the development of our two Berlin pandas with great excitement." He called the two cubs a "wonderful gift" for the city of Berlin and for the zoo in particular.

"I am delighted that I was able to take part in this next step in the lives of our two new Berliners, and to meet them personally on the 100th day after their birth when, in accordance with Chinese tradition, their official names are bestowed," Mueller said.

The panda twins would spend the next two to four years in Berlin and would move to China afterwards, according to Berlin Zoo. The two cubs will be introduced to the public from the beginning of next year.