By An Baijie In Hanoi 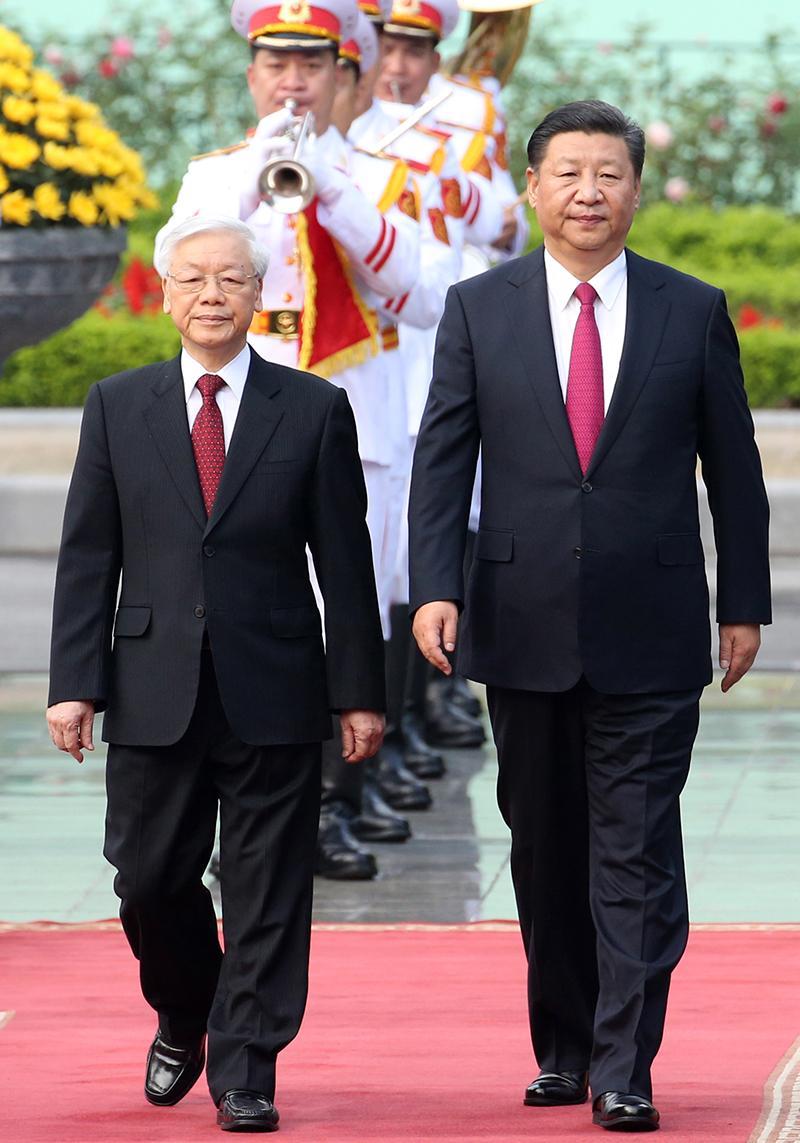 China and Vietnam signed documents to boost cooperation in such areas as the economy, investment, finance and cultural exchanges on Sunday during President Xi Jinping's state visit to the neighboring country.

The two countries will boost cooperation in building the Belt and Road, the economy and trade, as well as developing renewable energy and training officials.

The two countries will boost cooperation in building the Belt and Road, the economy and trade, as well as developing renewable energy and training officials

Xi's visit marks an unprecedented level of exchanges between the top leaders of the two nations following Trong's visit to China in January and Vietnamese President Tran Dai Quang's visit in May.

During their talks, Xi and Trong agreed that the two nations, led by communist parties, should learn from each other, inject new impetus into each other's social development and make contributions to world peace, stability and prosperity.

They also agreed to properly handle maritime issues in accordance with the consensus reached by the leaders of the two countries, push forward cooperation including joint exploitation of resources, and be dedicated to maintaining the peace and stability of the South China Sea.

Xi expressed gratitude for the congratulatory message sent by the Communist Party of Vietnam and Trong on the success of the recent congress and Xi's re-election as general secretary.

The Communist Party of Vietnam has led the Vietnamese people to make remarkable progress and find an appropriate development strategy since the country started its reform and opening-up three decades ago, Xi said.

Noting that it is his second state visit to Vietnam, after the first in 2015, Xi expressed gratitude for the warm, considerate reception from the Vietnamese party, government and people.

When Xi's plane arrived in Hanoi, local people wearing Vietnamese traditional clothes greeted the Chinese delegation, holding the flags of both countries. Local people also gathered in front of Xi's hotel to welcome the delegation when his car arrived.

Calling Xi a kindly comrade and old friend of the Vietnamese people, Trong said Xi has made especially important contributions to Vietnam-China relations and once again congratulated him.

Trong said that the fact that it is Xi's first trip overseas after the congress shows the high level of attention of the CPC and Xi to advancing Vietnam-China relations.

Trong expressed gratitude for China's support of the APEC Economic Leaders' Week held in Da Nang, saying that China has made important contributions to regional and global peace and stability.

Xi attended the APEC Economic Leaders' Meeting held on Friday and Saturday in Da Nang, where he gave a speech that gained global attention with his proposal to boost open economies.

Zhang Mingliang, a researcher at the School of International Studies of Jinan University, said that both China and Vietnam attach great importance to bilateral relations and are willing to consolidate bilateral ties through high-level exchanges.

Strengthening mutual trust among the public and enhancing communication between the people of the two countries will help to enhance political trust, he said.

Through the idea of mutual benefit, China and Vietnam can find a solution to maritime disputes that benefits and is accepted by both countries, he added.

China and Vietnam have made pioneering moves to manage their differences, according to Ruan Zongze, vice-president of the China Institute of International Studies.

Previous success and experience in solving territorial disputes have given the two countries confidence, which will help in finding solutions through negotiation, Ruan said.

As close neighbors with highly complementary economies, China and Vietnam will promote cooperation in infrastructure construction and connectivity, Ruan said.

Vietnam is actively promoting China-ASEAN cooperation, he said, and the free trade agreement between China and ASEAN will also create favorable conditions for the two nations' development.

"China-Vietnam relations are special and have a long history," Ruan said, adding that strengthened communication in governance between the two countries and the two parties will help to enhance political trust.

He noted that high-level exchanges play an important role in guiding and leading bilateral ties, which are driven by the "two engines" of relations between the two parties and countries.

With the two countries having entered a new development period, high-level exchanges will create more opportunities for bilateral cooperation, he said.