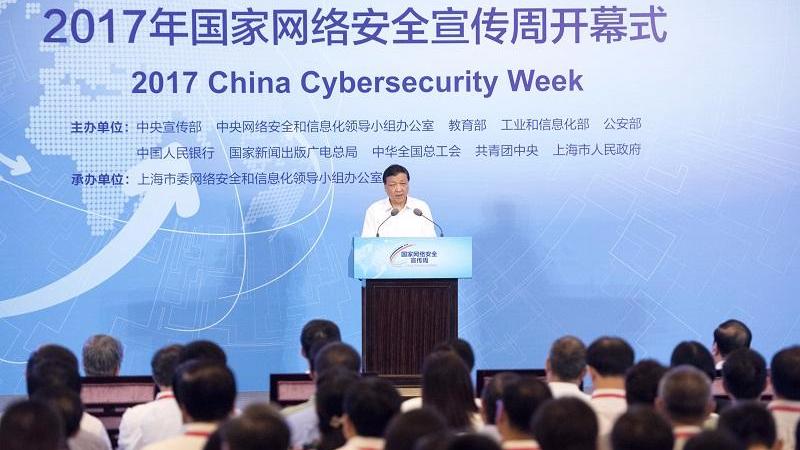 The photo taken on Sept 16, 2017 shows Liu Yunshan, a member of the Standing Committee of the Political Bureau of the Communist Party of China (CPC) Central Committee, speaks at the opening ceremony of the 2017 Cybersecurity Week in Shanghai. (LI XUEREN / XINHUA)

The app, co-developed by the anti-telecom crime office of the State Council and e-commerce giant Alibaba, is being exhibited at an Internet security event held in Shanghai from Sept 16 to 24.

The annual event was first held in 2014 and is part of the country's effort to guarantee cyberspace security.

The Central Leading Group for Cyberspace Affairs was established in 2014 and has enacted a cybersecurity law and relevant regulations, tightened supervision and cracked down on online crime.

"Cybersecurity consists of the security of the people as well as the nation," said Shen Yi, deputy director of the Cyberspace Governance Study Center at Fudan University.

He said Internet security could not just be evaluated by technical indicators but also had to bring public benefit.

China's web users are enjoying a cleaner Internet environment since various governmental departments have acted to clean up cyberspace.

In a recent campaign led by the National Office Against Pornographic and Illegal Publications, an investigative team seized 50 suspects, destroyed 118 websites and took down 913 online billboards that were pornographic or traded in personal information.

The office closed 73 illegal live streaming platforms in the first half of this year and imposed life bans on 1,879 live streamers who severely violated regulations.

Internet forums are also a target of the clean up. The Cyberspace Administration of China published a list of rules in August, requiring real name registration on bulletin boards.

A number of Internet users believe it will contain the spread of obscenity, violence, terrorism and false information. The regulations will take effect on Oct 1.

The move aims to prevent criminals from illegally obtaining personal information from the Internet. Internet companies are also playing an active part in the fight against cyber crimes.

A total of 1,116 "Internet police offices" have been set up by the Ministry of Public Security and Internet companies, including Baidu.com and Tencent.com, in an attempt to help investigate illegal information posted on their websites, as well as collect information from the public.

A total of 21 universities have established cybersecurity colleges, and China plans to build four to six international-standard Internet security institutes from 2017 to 2027.

By 2014, the number of China's Internet security personnel needed in key industry information systems and information infrastructure was 700,000, and the figure will double by 2020, according to Feng Huamin, vice president of Beijing Electronic Science and Technology Institute.

But more effort is needed to educate cybersecurity professionals. As of last year, China only had 143 Internet security majors spread over 126 universities, which is approximately 10 percent of technology universities.