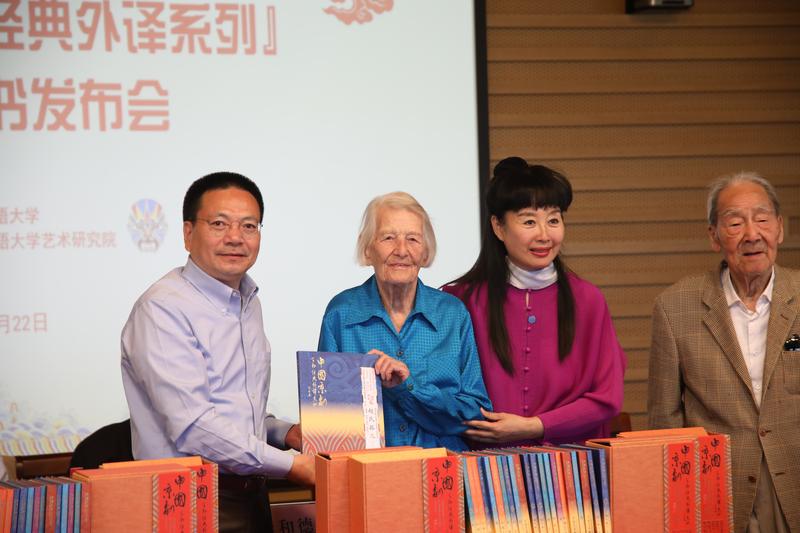 From left: Yuan Jun, vice-president of Beijing Foreign Studies University, Isabel Crook, a 103-year-old professor at the university, Sun Ping, dean of the university's school of art, and renowned translator Xu Yuanchong present at the launch ceremony of the bilingual books in Beijing. (PHOTO / CHINA DAILY)

A series of books in Chinese and English covering eight classic works of Peking Opera were recently released, with the aim of revealing details about the art form in a straightforward way.

Over the last 200 years, more than 1,000 Peking Opera shows have been produced telling the most classic historical stories in China

The bilingual books are from the Translation Series of a Hundred Jingju Classics, a project initiated in 2011 and implemented by the School of Art at Beijing Foreign Studies University.

The project is part of the larger effort by the central government to promote Chinese culture overseas.

The Peking Opera shows written about in the books include Revenge of the Orphan, The Death of General Luo Cheng and The Vivacious Matchmaker.

"Peking Opera, with its intricate and colorful costumes and makeup, as well as the unique performance combining singing, dialogue, acting and acrobatics, has become a symbol of traditional Chinese culture," says Wang Guoqing, deputy director of the Foreign Affairs Committee of the National Committee of the Chinese People's Political Consultative Conference, at the launch ceremony of the new books.

Over the last 200 years, more than 1,000 Peking Opera shows have been produced telling the most classic historical stories in China, as well as giving glimpses of society, according to Wang.

The art form was listed as an Intangible Cultural Heritage of Humanity by UNESCO in 2010.

Renowned performers such as Mei Lanfang and Cheng Yanqiu have also taken Peking Opera abroad. And though foreign fans are impressed by it, few understand the stories told on stage.

Different from previous English translations of books that mostly covered the scripts of Peking Opera plays, the new series introduces all aspects of the art form, including the script, actors and actresses, performance skills, musical instruments and costumes, according to Sun, who is herself a highly regarded Peking Opera artist.

"It fills the blank in overseas promotions of Peking Opera," says Liu Jian, a professor at the National Academy of Chinese Theater Arts.

"The inheritance and promotion of Peking Opera are very important. In a sense, promotion is even more important. The project sets a good example."

Scott Ian Rainen, an expat from the United States, who works at China Foreign Languages Publishing Administration, says he was happy to read the new books. Foreigners often don't understand the plot in a Peking Opera play, but the books introduce the cultural and historical background, its character modeling, costumes and props, artistic theories and so on, he says.

As of now, about 40 books of the Translation Series of a Hundred Jingju Classics have been published. In total, the plan is to publish books covering 100 Peking Opera classic plays.

The translation series was called a major research project on philosophical and social sciences by the Ministry of Education in 2013, and was enrolled in the booklist of the first 200"Chinese books going global" by the sectoral regulator then known as the State Administration of Press, Publication, Radio, Film and Television in 2016.