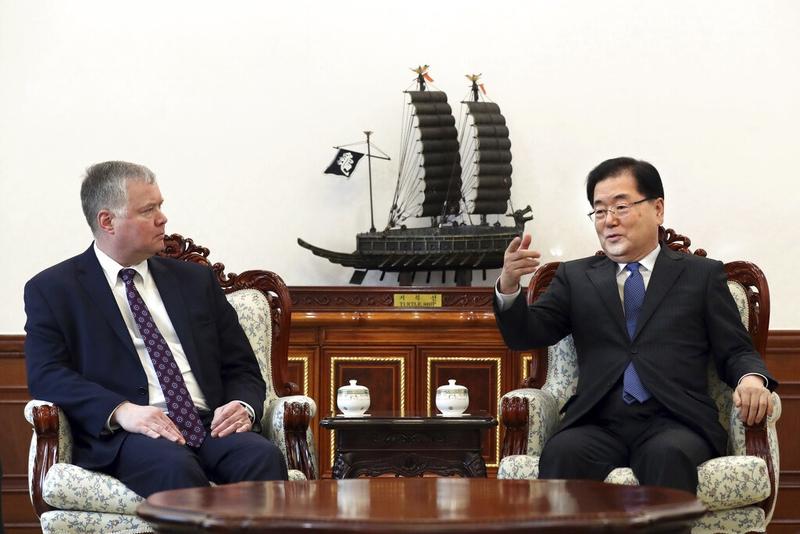 Stephen Biegun explained to Chung Eui-yong Washington's stance toward Pyongyang ahead of talks on setting up the summit, the presidential Blue House said in a statement.

There is speculation that Biegun will meet his DPRK counterpart at the Korean border village of Panmunjom or in the DPRK capital, Pyongyang, this week.

The Blue House did not specifically say what was discussed during Monday's meeting, but said Chung told Biegun that the ROK hopes the planning talks between the US and the DPRK will pave the way for a successful summit.

READ MORE: US seeks 'concrete deliverables' via DPRK talks ahead of summit

Trump and Kim met last June in Singapore, where they issued vague aspirational goals for a nuclear-free Korean Peninsula without describing when or how it would occur. Post-summit nuclear negotiations between the United States and the DPRK have been rocky, with the countries disagreeing on which should come first — DPRK nuclear disarmament or the removal of US-led international sanctions against Pyongyang.

In an interview with CBS' "Face the Nation," Trump said the second summit "is set" with Kim, but provided no further details. He said there was "a very good chance that we will make a deal."

The ROK didn't say whether Biegun and ROK officials discussed the possibility of partially easing the sanctions on the ROK to allow more inter-Korean cooperation and create more space for nuclear diplomacy.

ROK President Moon Jae-in, who held three summits with Kim last year and helped set up the first Trump-Kim meeting, has described inter-Korean reconciliation as crucial for resolving the nuclear standoff. But the tough sanctions have limited the range of joint activities the two Koreas can undertake.

The Koreas have discussed ambitious plans, such as reconnecting railways and roads across their border, resuming operations at a jointly run factory park in a DPRK border town and restarting ROK tours to the DPRK's Diamond Mountain resort. But none is possible unless the sanctions are eased, which Washington says won't happen unless the DPRK takes stronger steps toward irreversibly and verifiably relinquishing its nuclear weapons.

In his New Year's speech last month, Kim urged more cooperation between the Koreas and said the DPRK is ready to reopen the factory park and resume joint tours to the resort.

Last year, the DPRK released American detainees, suspended nuclear and long-range missile tests and dismantled a nuclear test site and parts of a rocket launch facility without the presence of outside experts. It has repeatedly demanded that the US reciprocate with measures such as sanctions relief, but Washington has called for the DPRK to take steps such as providing a detailed account of its nuclear and missile facilities that would be inspected and dismantled under a potential deal.

Biegun said last week that Kim committed to "the dismantlement and destruction of the DPRK’s plutonium and uranium enrichment facilities" during his summit with Moon in September and at a meeting with US Secretary of State Mike Pompeo in October.