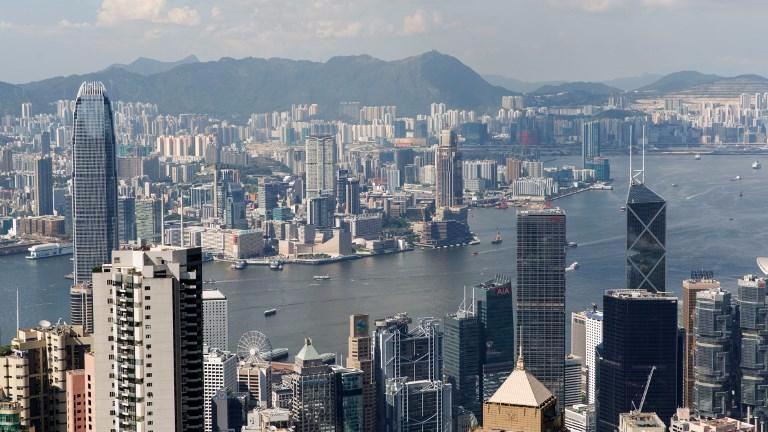 This photo taken on June 22, 2016 shows a general view of Victoria Harbour and the Hong Kong skyline from the Peak. (ANTHONY WALLACE / AFP)

The S&P on Friday lowered the long-term credit rating of Hong Kong to "AA+" from "AAA", with a "stable" outlook.

In a statement on Friday evening, Chan said the Special Administrative Region's government disagreed with S&P's assessment that the mainland's credit growth has increased economic and financial risks, and that Hong Kong may be correspondingly affected.

Our banking system remains healthy as banks in Hong Kong have a strong capital base, sound liquidity management and healthy asset quality

"Mainland China's credit growth has shown signs of moderating. The increase in the overall debt to GDP ratio has slowed down, with corporate and government debt to GDP ratios stabilizing. Shadow banking activities have receded thanks to tightened supervision by regulators," he said.

He added that Hong Kong has built up robust markets and strong regulations over the years to safeguard against any spillover risk from the Chinese mainland.

"Mainland-related lending by Hong Kong banks is subject to close supervision by the Hong Kong Monetary Authority (HKMA). The credit quality is high, as most of the borrowers are large state-owned enterprises and multinational firms, and a significant part of the lending is backed by collateral or guarantee," Chan said.

"As the second largest economy in the world, Mainland China will continue to be a key source of growth for the world," Chan added, noting the multitude of cross-boundary investment channels with the mainland will enhance Hong Kong's two-way platform for overseas investors seeking to tap into the mainland markets and for mainland enterprises going global.

"Hong Kong is also well positioned to take advantage of the implementation of the Belt and Road Initiative."