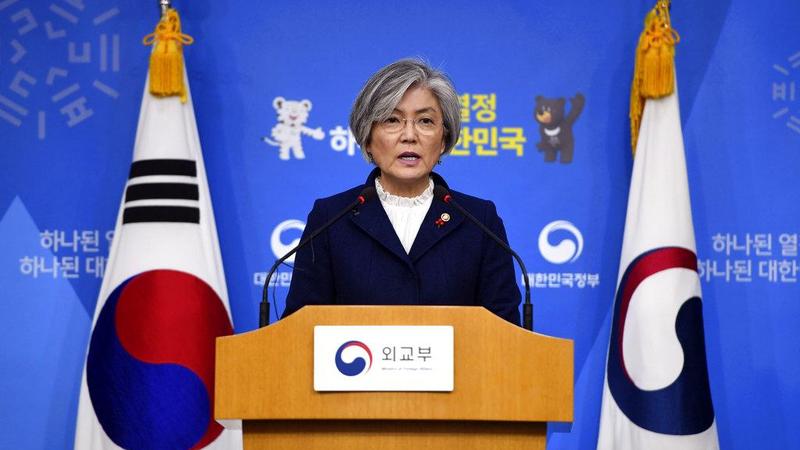 SEOUL - China is expected to play an important role in bringing peace and security to the Korean Peninsula as the country is a "key player" in the peninsula issues, the Republic of Korea (ROK)'s foreign minister said on Wednesday.

Foreign Minister Kang Kyung-wha made the remarks at a press conference with foreign correspondents in Seoul, saying the Democratic People's Republic of Korea (DPRK)'s top leader Kim Jong-un's visit to Beijing will contribute to realizing the shared goal of denuclearization on the peninsula and a lasting peace settlement.

The DPRK leader, visiting China for the third time within three months, arrived in Beijing Tuesday for a two-day visit.

"China has an important role to play on issues of peace and security on the Korean Peninsula," said Kang.

"China is a key player" in issues being unfolded on the peninsula, said the foreign minister who noted that ROK and China are "moving in the same direction."

He also said the DPRK leader's third visit to China was a step forward toward the peninsula's denuclearization.

Kang expected the DPRK leader's dialogue in Beijing to contribute to realizing the shared goal of denuclearization and the establishment of lasting peace on the peninsula, saying the DPRK-US summit started to build trust and diplomacy among relevant parties.

"We are watching closely to see the outcome of this latest move in Chairman Kim's new-found diplomatic activism," said the top ROK diplomat.

Détente emerged on the peninsula after Kim said in his New Year speech that he was willing to dispatch the DPRK delegation to the ROK-hosted Winter Olympics.

After the winter sports event, Kim met with ROK President Moon Jae-in on April 27 in the truce village of Panmunjom, agreeing to complete denuclearization and for an improved inter-Korean relations.

On June 12, Kim and US President Donald Trump held the first DPRK-US summit in Singapore.

Tapping on the joint statement that Kim and Trump signed, Kang said the summit was a good outcome as the complete denuclearization became a goal and that she believes Pyongyang would live up to.

After the DPRK-US summit, Trump said that he would stop "provocative" war games between ROK and the US.

Seoul and Washington earlier this week announced the suspension of the annual Ulchi Freedom Guardian joint military exercises between ROK and the US, which is scheduled for August.

Suspending the military exercises was a "goodwill gesture to strengthen dialogue momentum" for denuclearization and peace regime on the peninsula, the ROK foreign minister said.

Kang said the DPRK's closure of its Punggye-ri nuclear test site, where it conducted all of its six nuclear tests, was an important measure on the DPRK part, saying Pyongyang's closure of its missile engine testing site will be in the irreversible and verifiable process.

Trump said the DPRK leader will dismantle its missile engine testing site without elaborating on schedules.

The foreign minister said UN Security Council sanctions on the DPRK over its nuclear and missile tests would remain in place until it takes concrete action for complete denuclearization, but she expected the DPRK action to take place "sooner rather than later."

Kang also added declaring an end to the 1950-1953 Korean War was a "very important" part of the Panmunjom Declaration, which Moon and Kim signed on April 27 after holding their first summit at the border village of Panmunjom.

Under the declaration, Moon and Kim agreed to change the current armistice agreement into a peace treaty by the end of this year. The peninsula remains technically at war as the 1950-1953 Korean War ended with armistice.

Kang said peace talks typically start with the war-end declaration and she noted that ROK will start such talks "as soon as possible" as peace negotiations is a time-consuming process.