By Luis Liu and Wang Yuke 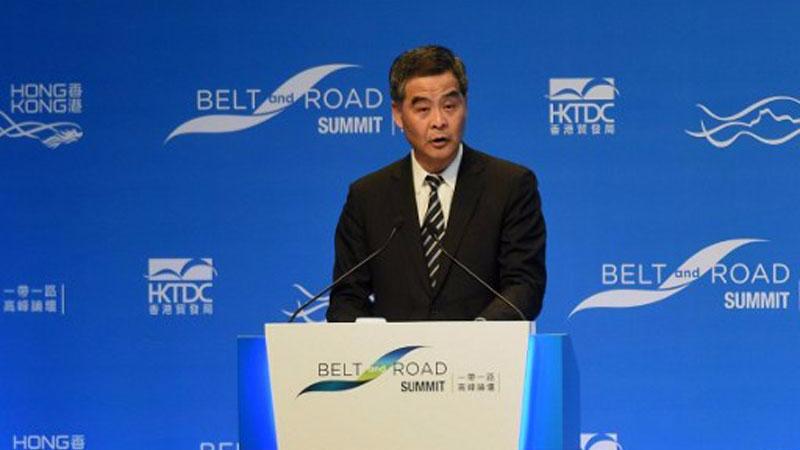 Hong Kong Chief Executive Leung Chun-ying gives the opening remarks of the Belt and Road summit being held in Hong Kong on May 18, 2016. (Isaac Lawrence / AFP)

Hong Kong, “China’s most international and open city”, can more clearly see its opportunities and future direction after a high-level delegation participated “fruitfully” in a two-day summit on the nation’s top development foray into the world - the Belt and Road Initiative(B&R) - Chief Executive Leung Chun-ying said on Monday in Beijing.

This included providing professional and financial services and also in building infrastructure projects.

Giving feedback from the B&R Forum for International Cooperation, the CE expressed his desire to offer Hong Kong’s experience in infrastructure and urban planning to other countries and territories along the Belt and Road.

Leung cited Hong Kong’s “rail and property” model as a case in point. The housing projects above and around, and the facilities under, Hong Kong’s railway stations have boosted the value of government capital. This assisted investment in future infrastructure projects, Leung explained.

He said many senior officials from B&R economies expressed an interest in applying this model to urbanization projects.

“Such a big development foray into the world would create vast opportunities for various sectors,” Leung said.

Planning, engineering, surveying, construction and landscape architecture were leading fields, Leung said. Finance and accounting would also to be on this list.

In a separate development, Hong Kong experts said the city would assist major cities along the B&R in urban planning strategies by providing an advanced data system.

The big data system was developed by professors at the Institute of Future Cities at the Chinese University of Hong Kong (CUHK) and academics from Xi’an Jiaotong University. It enables quick collection of city data in the form of images and statistics needed by policy makers, city planners and urban climate scientists. This helps them build smart, healthy and green cities.

Researchers have experimented with the system in Hong Kong - a city well-known for its high density. The results turned out to be accurate and efficient.

“The fact that it works so well in such a geographically complicated city gives us confidence that it can be applied to and benefit any other mainland city,” said Ren Chao, associate professor at the School of Architecture of CUHK.

The system had already been applied by the European Commission and the World Meteorological Organization. A cooperation plan with Google, one of the world’s leading technology companies, was also underway, according Ren.