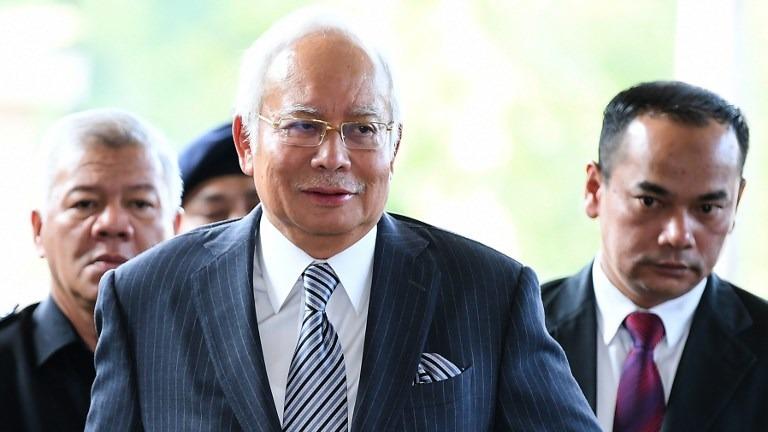 Najib was arrested on Wednesday in connection with a deposit of 2.6 billion ringgit (US$627.79 million) into his personal account and will be taken to court on Thursday, the Malaysian Anti-Corruption Commission (MACC) said in a statement.

Najib was arrested on Wednesday in connection with a deposit of 2.6 billion ringgit (US$627.79 million) into his personal account and will be taken to court on Thursday, the Malaysian Anti-Corruption Commission said in a statement

He would face "several charges" under a section of the MACC Act which deals with using one's office or position for gratification, the agency said.

The former premier has faced intense scrutiny since unexpectedly losing a general election in May to Mahathir Mohamad, who reopened investigations into allegations that billions of dollars were stolen from 1MDB.

In July and August, Najib was slapped with charges of money laundering, criminal breach of trust and abuse of power in relation to 1MDB. The charges relate to funds of about 42 million ringgit (US$10.14 million) that allegedly flowed from SRC International, a former 1MDB unit, into Najib's personal bank account.

Najib has pleaded not guilty to all charges and has consistently denied wrongdoing.

The US Department of Justice has alleged in civil lawsuits that more than US$4.5 billion from 1MDB was laundered through a complex web of transactions and shell companies.

It also alleges that US$681 million, based on foreign exchange rates at the time of the transaction, of 1MDB funds went into Najib's bank account.

Najib has said the money in his account were donations from Saudi Arabia, most of which he returned.

1MDB is being investigated by at least six countries, including Singapore, Switzerland and the United States, over alleged money laundering and graft.

SRC had been the initial focus of Malaysian investigators as all the suspicious transactions involving it went through Malaysian entities.

Charges to be filed on Thursday regarding the 2.6 billion ringgit deposit would be first ones outside of SRC.