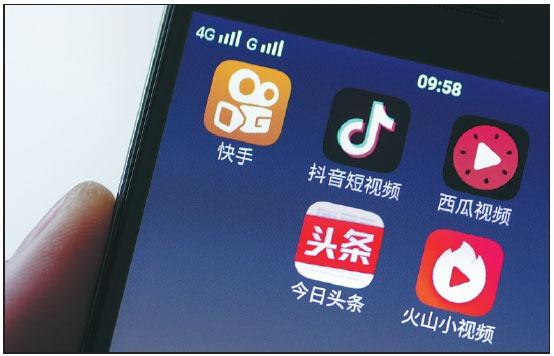 In this undated photo, mobile video apps including Kuaishou, Douyin, Xigua and Huoshan are displayed on the screen of a 4G smartphone. (PHOTO / PROVIDED TO CHINA DAILY)

Short videos are seeing explosive growth in China and are gradually becoming one of the major ways Chinese netizens are recording and sharing information.

Amid such videos' rising popularity, China's internet regulator has ramped up oversight of the platforms they appear on, after some were found to be sharing harmful and vulgar content.

Kuaishou, a photo and video-sharing app popular among rural communities and migrant workers, allows users to upload short videos with a duration from 10 seconds to a few minutes each. The content ranges from cooking, physical exercise, dancing and family gatherings.

"We are devoted to recording the daily lives of ordinary people, and giving them a stage to express themselves," said Su Hua, founder and CEO of Kuaishou, adding that the app is looking to improve its user experience and attract more new users.

Su said 87 percent of Kuaishou's users are of the post-90s generation. The app recommends personalized content to users based on their browsing history and preferences with the help of artificial intelligence technology and sophisticated algorithms.

In March 2017, Kuaishou attracted a US$350 million investment from tech behemoth Tencent Holdings Ltd. It also received funding from internet search giant Baidu Inc and Sequoia Capital in 2016. Their investments valued Kuaishou at over US$3 billion.

Statistics from data research firm QuestMobile show short video platforms witnessed surging growth in China last year with users exceeding 410 million, up 116.5 percent on the previous year. Total time spent on short video apps accounted for 5.5 percent of all time spent on mobile apps in 2017. That number stood at only 1.3 percent in 2016.

Zhang Yiming, CEO of Toutiao, said the company invested more than 1 billion yuan (US$157 million) to support producers of high-quality original short videos last year. In addition to Douyin, Toutiao also has other short video platforms such as Huoshan and Xigua.

Figures from mobile big data company QuestMobile show that by the end of January Kuaishou had 120 million daily active users, while Douyin had 62 million and Huoshan had 53 million.

According to consultancy iiMedia, short video platforms completed a total of 48 venture capital deals in 2017, compared with 41 deals in 2016. Both Alibaba Group Holding Ltd and Tencent have invested in video content or livestreaming startups.

The sector's rapid growth since the second half of 2016 is attributed to fourth-generation communications and mobile internet technologies. The plethora of platforms that have sprung up are closely watched by investors that are eager to back potential success stories with hundreds of millions of dollars.

However, this lightning-quick surge has led to a regulatory gap that prompted concerns about the risk of vulgar online content, intellectual property violations and inadequate supervision.

For example, Kuaishou and Huoshan have been criticized for featuring video hosts who publicize and distribute counterfeit products on their videos.

The Cyberspace Administration of China ordered Kuaishou and Huoshan on April 4 to remove harmful and vulgar content so as to create a clean online environment. The two apps were later removed from Android app stores and updates are no longer available for versions that run on Apple's iPhones, media reported.

The two platforms have made public apologies, promising to overhaul their services and increase manpower in content review. This will include removing vulgar, pornographic or violent content, blacklisting publishers of inappropriate content, and prohibiting users under the age of 18 from registering as livestreaming hosts.

Su of Kuaishou said it is necessary for video-sharing platforms to strengthen uploaded video content monitoring in accordance with the law and regulations, before recommending them to users. Douyin has also promised to increase manpower in content review and to post more appropriate content.

Ma said young mobile users are generating growing demand for short videos, as their free time tends to be fragmented and short.

It seems Kuaishou is favored by people living in third and fourth-tier cities, while Douyin is popular among youths in first and second-tier cities, according to Ma.

"However, most of the apps will not make profits in the short term, as the early investment is huge. They generate income through advertisement revenue, membership fees and other value-added services," she added.