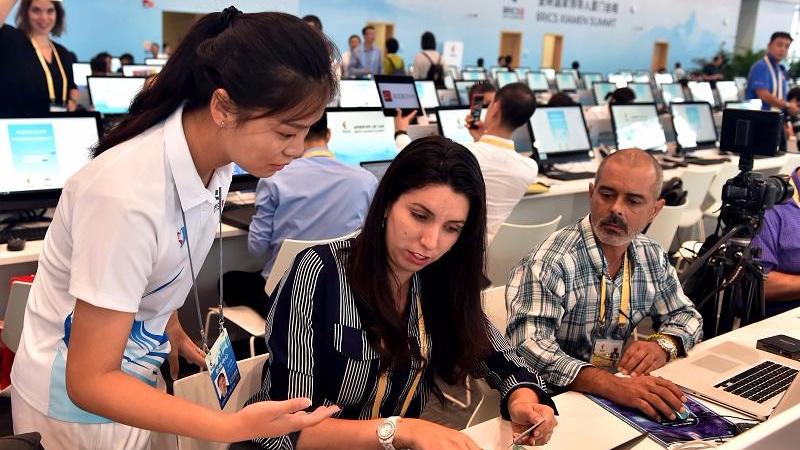 One of the more than 2,000 volunteers at the BRICS Summit assists a foreign reporter at the media center in Xiamen, Fujian province, on Sept 3, 2017. (NIAN QING / FOR CHINA DAILY)

Hometown volunteers at the BRICS Xiamen Summit said they feel honored to participate and hope that their international guests will fall in love with the coastal city through their services.

Over 2,000 volunteers, given the affectionate nickname "little egrets", after the city bird of Xiamen, which is also a symbol of peace and harmony, are helping with reception, transportation, meetings and media services.

They distinguished themselves among some 30,000 applicants from more than 10 universities in Xiamen. There are also some international student volunteers from other BRICS members and Southeast Asian countries.

Before the summit, the volunteers were trained for two months on etiquette, first aid and foreign languages and cultures.

"Every BRICS country has its distinctive customs and culture, and we aimed for the volunteers to have more comprehensive and customized instruction than just simple physical training," said Zhang Xin, chief attendant at Xiamen Airlines, who led the training.

Feng Xue, a volunteer from Xiamen University of Technology, said she learned a lot about the culture and customs of the BRICS members.

"For example, we cannot touch the heads of kids from India to show affection; we'd better avoid mentioning the number six when talking with guests from Russia; and we need to ask guests if they are allergic to specific foods," she said. Touching the head is ill-advised in India because it is commonly considered sacred, while even numbers can be bad luck to some Russians.

"Every one of us plays an indispensable role at the event," said Lu Tingting, a graduate student volunteer from Xiamen University. "I hope that through our service, more people from across the globe could get to know and fall in love with this fascinating city."

In addition to the student volunteers, 1 million residents of Xiamen from all walks of life - about a third of the city's population - are providing services at the airport, bus stations, sightseeing spots, and many other places across the city during the summit, according to Ji Jing, deputy director of the Civilization Office of Xiamen.

"The BRICS Summit is a grand event of the year and we are very happy to serve guests from home and abroad."

Zhang Yi contributed to this story.