OUAGADOUGOU — Dozens of people were feared still missing on Thursday after an ambush on workers near a Canadian-owned mine in Burkina Faso killed at least 37, the worst such attack for years in a country plagued by jihadist violence.

Quebec-based gold miner Semafo said five of its buses with a military escort came under fire on the road leading to its Boungou mine in the eastern region of Est, about 40 kilometers from Boungou, on Wednesday.

The assailants’ identity was unclear, but Burkina Faso is struggling to combat surging Islamist violence in remote eastern and northern scrubland areas of the West African state.

“Once more our people are in mourning because of terrorist groups that are multiplying, murderous actions against our civilians and our defense and security forces,” President Roch Marc Kabore said in a televised address.

Semafo said the Boungou mine site remained secured, although it has suspended operations following the attack.

It was unclear exactly how many people were in the convoy, what their nationalities were or how many were missing. But two security sources said dozens may still be unaccounted for.

One miner was shot in the leg but survived because the bodies of other victims fell on top of him, shielding him from the hail of bullets, his brother Benjamin Compaore said.

“There were more and more shots and then because the others were on top and he was underneath, God protected him,” he said, speaking outside the Ouagadougou hospital where the wounded were being treated and distraught family members gathered.

Some questioned why the authorities had not yet provided a full casualty list.

Theodore Silga said his younger brother Gilbert, 26, had been on one of the ambushed buses. “The people working with my brother said they have not heard from him.” 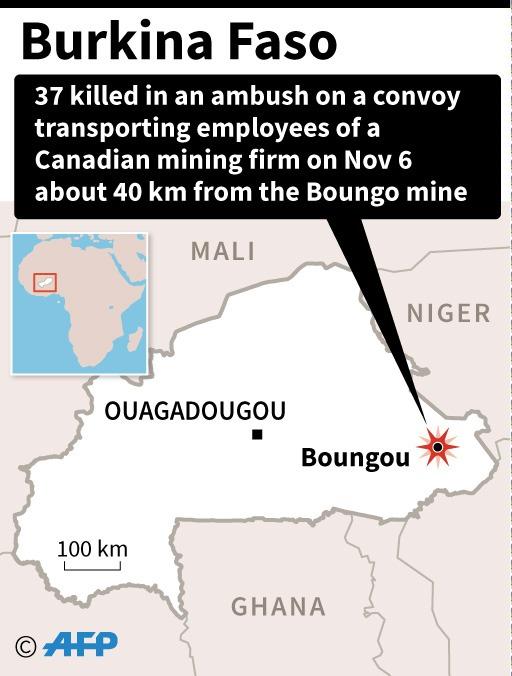 Semafo has said that under new safety guidelines, Burkinabe employees travel to and from the mine with a military escort by road while international staff are flown by helicopter.

Two separate sources, who have worked at the mine, said the convoy left weekly carrying about 250 staff, usually in five buses of 50-60 people each.

Canada’s foreign ministry said there were no reports so far of any of its nationals being victims of the attack, the worst in Burkina Faso since groups with links to Islamic State and al Qaeda began targeting it in January 2016. Then, al Qaeda militants killed 32 people in a raid on a popular cafe and hotel in Ouagadougou.