By Hu Dongmei and Zhang Xiaomin 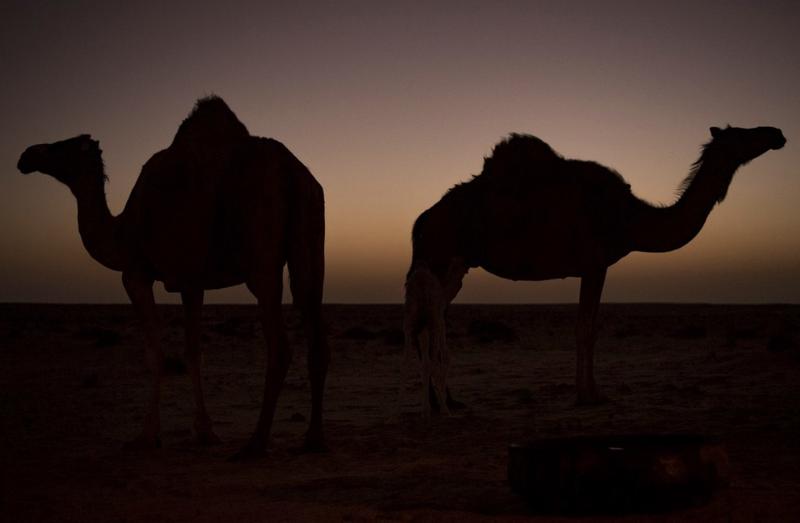 Camels are silhouetted at dusk in the desert near Dakhla in Morocco-administered Western Sahara on October 13, 2019. (FADEL SENNA / AFP)

A researcher at the Forestry and Grassland Administration of the Ningxia Hui autonomous region, he recalled that many agricultural experts from China doubted whether Mauritania's hot climate was suitable for growing alfalfa in the Sahara.

Ultimately, alfalfa proved to be the best option for pasture crops, although it had never been grown on a large scale in Mauritania before

Ren, then 57, had accepted an assignment to work at the Mauritania Animal Husbandry Technology demonstration center to provide technical guidance and training on planting pasture and forage material.

"I had no confidence in growing pasture in the Sahara desert," Ren recalled.

Despite the doubts and concerns, Ren traveled to the Northwest African country in April 2017, determined to take on the challenge before his retirement.

In the long dry season, the desertified grassland could barely meet the basic food needs of cattle, sheep and camels.

As a result, during the eight months from the end of each year to the following July, many animals starved, and even died, due to insufficient feed.

As soon as Ren arrived, he began to experiment with the introduction of various pastures.

"But when I stood on the sands of the endless Sahara desert and saw that a bucket of water poured on the ground did nothing, I could not help but have some doubts," he said.

However, Ren was determined to conduct successful field tests.

With the cooperation of other experts at the demonstration center, he explored various water-saving irrigation methods.

They used cow and sheep manure and other organic matter to improve the soil quality. A fertilization plan was devised according to the soil test reports, and to coincide with crop growing periods.

According to Ren, there was virtually no pasture planting industry in Mauritania at that time.

During his experiments, he tried 21 varieties, screening out the unsuitable ones and perfecting sowing times for each variety.

Ren often worked under the hot sun to observe the impact of the temperature, the growth of the crops, and the damage caused by diseases and pests.

The observation data provided valuable reference material for the growing of different types of pastures.

Ultimately, alfalfa proved to be the best option for pasture crops, although it had never been grown on a large scale in Mauritania before.

After three years of experimentation, the planting area of alfalfa reached more than 20 hectares, and that of Gaodan grass nearly 13.3 hectares.

From the third crop of alfalfa, the average yield of air-dried grass per mu (0.06 hectares) was about 300 kilograms, and the maximum up to 400 kg.

Alfalfa can be harvested 11 to 12 times a year, and the annual yield of alfalfa per mu is about 3.6 metric tons

Alfalfa can be harvested 11 to 12 times a year, and the annual yield of alfalfa per mu is about 3.6 metric tons.

The average yield of Gaodan grass per mu is about 4.2 tons.

For his outstanding contribution to agricultural research, Ren was recently awarded a national medal by the government of Mauritania.

He also conducted experiments on the introduction of silage corn, which is widely used for forage feed in the United States.

The first two experiments with silage corn failed because the pollination took place during the hot months.

After the sowing date was changed, the third trial finally succeeded.

The forage planting and processing of the demonstration center has become a successful example of the Chinese government's assistance to African countries.