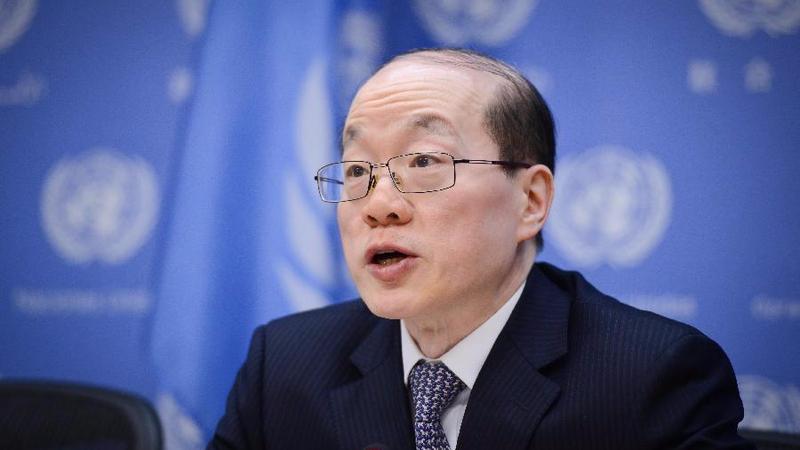 In this Feb 3, 2015 photo, Liu Jieyi, China's permanent representative to the United Nations, speaks during a press briefing at the UN headquarters in New York. Liu said in Aug 5, 2017 that China is opposed to the Democratic People's Republic of Korea’s launching activities that violate Security Council resolutions and are in defiance of the will of the entire international community. (NIU XIAOLEI / XINHUA)

UNITED NATIONS – The UN Security Council resolution imposing new tough sanctions against the Democratic People's Republic of Korea (DPRK) is all about preventing chaos and conflict on the Korean Peninsula, said Chinese ambassador to the United Nations Liu Jieyi on Saturday.

The unanimous adoption of Resolution 2371 by the council on Saturday demonstrates that the international community is united in its position regarding the nuclear issue of the Korean Peninsula, Liu told the Security Council after the voting of the sanctions.

There are three major components in the resolution: further sanctions against the DPRK's nuclear and missile programs; a call for the resumption of the six-party talks, commitment to finding a peaceful solution; and the emphasis of the importance of de-escalating tensions on the Korean Peninsula by the parties concerned, said Liu.

The sanctions have no intention to harm activities that are not prohibited by the resolution such as economic activities and cooperation, food and economic assistance

It has no intention to harm activities that are not prohibited by the resolution such as economic activities and cooperation, food and economic assistance, he added.

China is opposed to the DPRK's launching activities that violate Security Council resolutions and are in defiance of the will of the entire international community, he said.

China has always insisted on realizing the denuclearization of the Korean Peninsula, upholding peace and stability there and seeking a solution through dialogue and consultation. "China has always and firmly been opposed to chaos and conflict on the peninsula," said Liu.

China believes that all of the parties should implement the provisions contained in the resolution fully and earnestly, the ambassador said.

China has been making tireless efforts to promote denuclearization of the peninsula and to uphold peace and stability on the peninsula, he noted.

In a July 4 joint statement on the Korean Peninsula issue, China and Russia put forward a roadmap on the basis of Russia's step-by-step approach and China's idea of a dual approach and China's initiative of suspension-for-suspension – which calls for the DPRK to suspend its nuclear and missile activities and for the United States and the Republic of Korea (ROK) to suspend their large-scale war games, said Liu.

The dual approach calls for parallel efforts to move forward both denuclearization and the establishment of a peaceful mechanism on the peninsula.

The China-Russia initiative, which aims at tackling both the symptoms and the root causes of the problem and seeks a solution through an integrated approach, is realistic and feasible, he said, expressing his hope that the initiative would get the support of the relevant parties.

China has taken note that the US has recently indicated once again that it is not seeking a "regime change" nor a "regime collapse" in the DPRK and that Washington is in no hurry to push for the reunification of the Korean Peninsula and that its troops will not push through the 38th Parallel, said Liu.

"It is our hope that the US side will translate these four Nos into concrete policies," he noted.

Beefing up military deployment on the peninsula is not helpful in realizing the denuclearization of the peninsula and maintaining regional peace and stability, he added.

The deployment of the THAAD missile defense system in the ROK will not bring a solution to the issue of the DPRK's nuclear testing and missile launching, said the ambassador.

China strongly urges parties concerned to halt the process of base deployment and to dismantle relevant equipment, he said.

Meanwhile, China urges the DPRK to respect the council resolutions and to stop taking actions that might further escalate tensions on the peninsula, said the ambassador.

"We hope the parties concerned will immediately take effective action to prevent the situation from further escalating, create conditions for the resumption of talks and exert efforts to bring back at an early date the nuclear issue of the peninsula to the right track of seeking a peaceful solution through dialogue and consultation."

The UN Security Council resolution was adopted in response to the DPRK's ballistic missile launches on July 3 and 28, which the country has claimed were of "intercontinental" range. The resolution significantly strengthens the sanctions on the DPRK, imposing a full ban on the export of coal, iron and iron ore from the country.