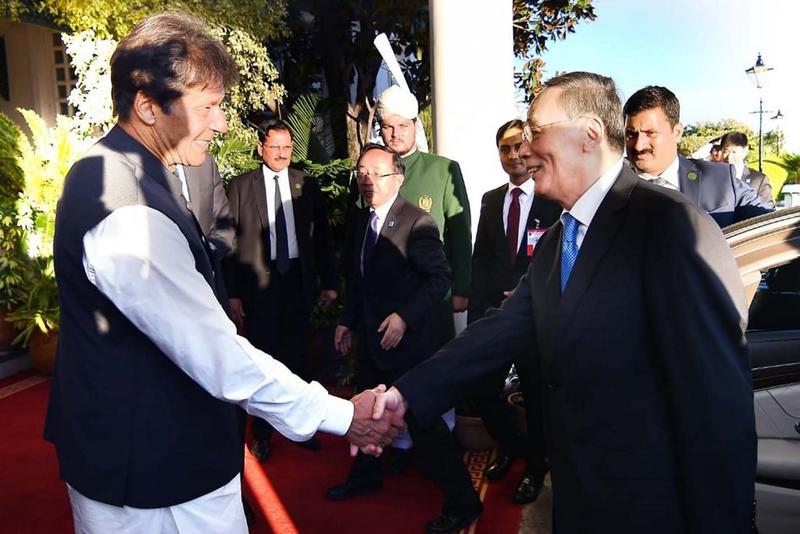 In this handout photograph released by the Press Information Department (PID) on May 26, 2019, shows Pakistani Prime Minister Imran Khan (left) shaking hands with Chinese Vice President Wang Qishan on his arrival for a meeting in Islamabad. (PHOTO / AFP)

When meeting with the Pakistani president, Wang said China and Pakistan are "iron friends." Throughout the past 68 years since the establishment of diplomatic ties, the two countries have always respected and supported each other on issues concerning each others' core interests, forging the sincerest friendship.

The development of the China-Pakistan Economic Corridor (CPEC) has made concrete achievements and has become an important hallmark for China-Pakistan friendly cooperation in the new era..

He said the development of the China-Pakistan Economic Corridor (CPEC) has made concrete achievements and has become an important hallmark for China-Pakistan friendly cooperation in the new era, adding that his visit was meant for sending out a signal once more to peoples of the two countries and the world that China and Pakistan are all-weather strategic cooperative partners.

Wang said China is willing to strengthen the all-around cooperation with Pakistan in various sectors and at various levels, so as to make the friendship better benefit the two sides and forge a closer China-Pakistan community of shared future in the new era.

For his part, President Arif Alvi extended congratulations to the upcoming 70th anniversary of the founding of the People's Republic of China. He said Pakistan-China cooperation has become more important in current times. Pakistan is firmly committed to the one-China policy, firmly supports China in safeguarding the country's core and major interests, he said.

Pakistan wishes to deepen cooperation with China in such areas including agriculture, tourism and trade, with a bid to promote the all-weather strategic cooperative partnership further ahead, said the president, who also expressed appreciation for China's support to Pakistan and wished China to play a bigger role in international and regional affairs.

After their meeting, the Pakistani president conferred on Wang the Nishan-e-Pakistan, the country's highest award for foreign leaders.

China is ready to join hands with Pakistan to deepen high-level exchanges, boost strategic communication and pragmatic cooperation as well as closely coordinate in international and regional affairs between the two sides, Wang said.

Wang called on the two sides to work for high-quality CPEC development in the next phase, and make concrete progress in industrial park building and agricultural cooperation.

China will speed up the implementation of social and people's livelihood projects of early harvest, and discuss the third-party cooperation in the CPEC development, he added.

The Chinese vice president called for strengthened people-to-people and cultural exchanges and collaboration so as to expand the public foundation for the China-Pakistan friendship.

Wang hoped that Pakistan will take effective measures to provide security guarantees for the cooperation and exchanges between the two countries.

Imran Khan, for his part, said that Pakistan adheres to the friendly policy towards China, admires the achievements of China's reform and opening-up and stands ready to consolidate the traditional friendship with China.

Pakistan also hopes to learn from China in terms of state governance, and enhance exchanges and cooperation in the sectors of agricultural technology, special economic zone development, talent training and anti-corruption.

Noting that fruitful results have been reaped in the CPEC development, the Pakistani prime minister said that the CPEC has played an important role in promoting Pakistan's economic development and improving people's livelihood.

He said Pakistan has established a special committee to take charge of inter-department and inter-sector coordination and ensure personnel safety of Chinese institutions in Pakistan.

Pakistan will continue to enhance coordination with China in international and regional affairs so as to enrich bilateral all-weather strategic cooperative partnership.

During his stay in Pakistan, the Chinese vice president also met with local leaders of the Punjab province, addressed the Friends of Silk Road Forum and visited Haier-Ruba Economic Zone.