Timely end of chaos in HK key to protecting its economic, social foundations 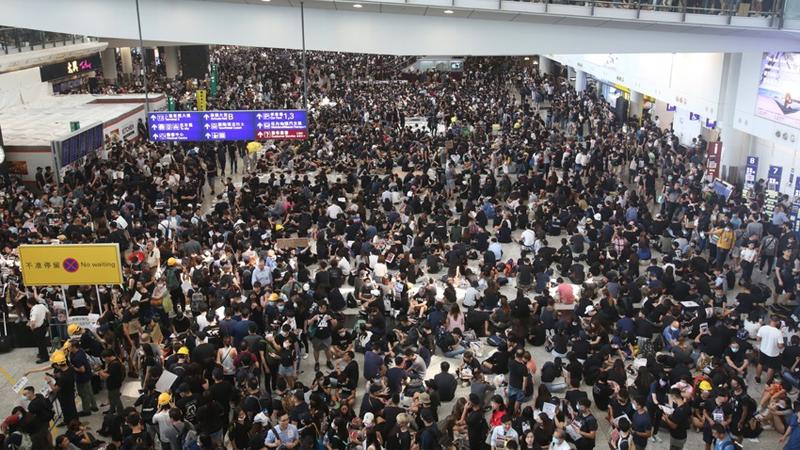 In this Aug 12, 2019 photo, thousands of protesters flooded Hong Kong International Airport, leading to the cancellation of all hundreds of flights for the rest of the day. (PHOTO / CHINA DAILY)

BEIJING - Radicalized protests and escalating violence in Hong Kong have weighed down the Asian financial hub and compromised the well-being of its 7 million residents.

Hong Kong International Airport is the latest to suffer. The airport, which normally handles nearly 200,000 passengers a day, has been disturbed by unauthorized protests, resulting in a large number of flights canceled.

IN PHOTOS: Travelers bear the brunt of protests as flights canceled again in HK

The illegal gathering also caused serious traffic jams along the expressways around the airport and affected the commutes of local residents.

Carrying weapons, smashing facilities, setting fires, blocking main streets and harassing passers-by, wherever the radicals have ventured, streets lie deserted, with shops closed and destruction in their wake. The scenes bear little resemblance to the dynamic and cosmopolitan Hong Kong of recent memory.

The damage has begun to show. Hong Kong's gross domestic product in the second quarter increased by only 0.6 percent in real terms year on year with the three sectors of catering, tourism and retailing hit the hardest.

Visitor arrivals and the hotel occupancy rate reported double-digit reductions in July and tourism business operators had their average revenue drop by almost 80 percent in the past two months year on year.

These scenes, so unbearable to anyone with love for Hong Kong, are exactly what the radicals and their behind-the-scenes string-pullers desire.

By taking a look at the regions around the world that underwent "color revolutions" instigated by Western forces, one sees case after case of civil war, social disorder, ethnic conflict and human suffering.

This cannot become the future of Hong Kong!

ALSO READ: Violence is pushing HK into 'abyss of destruction'

An increasing number of Hong Kong residents have broken their silence by standing against violence and voicing their support for the rule of law. They have expressed the Hong Kong people's common will that the chaos can last no longer.

It is the common aspiration of the Hong Kong people to stop violence and the chaos, so that Hong Kong can restore order and return to prosperity and harmony. Anyone who harms the city will surely be severely punished by law and condemned by the people.