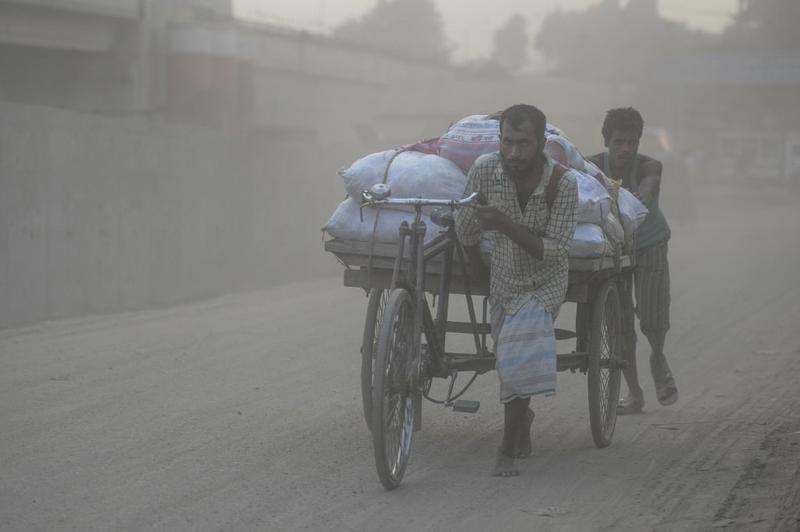 In this photo taken on Nov 25, 2019, men look on as they pull a three-wheeler cart on a road under heavy smog conditions in Dhaka. (MUNIR UZ ZAMAN / AFP)

DHAKA — The hazy skies of Dhaka city in the beginning of winter may seem like harbingers of the cold season. But what appears to be only mist or fog, is actually smog and dust.

The capital had the worst air quality in the world on Monday, according to Air Visual, an air quality measuring application.

The alarming situation prompted the government to chalk out immediate measures to give city-dwellers some relief.

At an emergency inter-ministerial meeting, it was decided that steps would be taken to stop burning garbage at waste dump sites and shut down all illegal brick kilns around the capital. It also directed the Dhaka north and south city corporations to sprinkle water on the city roads to reduce dust in the air.

Brick kilns were identified as the single largest source of air pollution in Dhaka city, with 50 percent of the total pollution attributed to those

“The level of air pollution is alarming. Just a few days ago, air quality of Dhaka was the third or fourth worst in the world. But now it tops the ranking,” said Md Shahab Uddin, minister for environment, forest and climate change, who presided over the meeting held at the conference room of the ministry.

The meeting also decided that directives would be issued to cover all construction materials. From now on, the government would mention this instruction in all their construction-related tenders, the minister said.

The government is also going to issue a gazette notification to ensure 100 percent use of ecofriendly green bricks — an eco-friendly alternative — for all government construction projects.

The smog from brick kilns, smoke from unfit vehicles and dust generated from public and private constructions sites, including those of the mega projects taken by the government, were the main sources of air pollution, the minister said.

Brick kilns were identified as the single largest source of air pollution in Dhaka city, with 50 percent of the total pollution attributed to those.

During the dry season, 58 percent of the city’s total air pollution is caused by the brick kilns, according to the Department of Environment (DoE).

Although previous drives against illegal brick kilns had failed, experts believe it would be different this time around as there is an alternative to traditionally-used bricks in green bricks.

According to a 2016 Asian Development Bank (ADB) report, the country produces 22.71 billion pieces of bricks a year.

Compounding the situation is the rising number of registered vehicles. Minister Shahab Uddin said the number of vehicles had increased over the years, contributing to air pollution.

According to data from the Bangladesh Road and Transport Authority, the number of motor of vehicles in Dhaka almost doubled in the last nine years, rising to 13,70,500 last years.

The minister said it was necessary to make a coordinated effort while conducting the development works to check air pollution.

Solaiman Haider, director general of the DoE, gave a presentation on the air quality situation of Dhaka city in the beginning of the meeting yesterday, saying the government had already installed 16 air quality monitoring stations in Dhaka and different other cities.

Data from those showed that 197 days of 2018 were classified as “unhealthy” in Dhaka city.

The DoE operates three continuous air monitoring stations (CAMs) in Dhaka — one in Sher-e-Bangla Nagar, one in Farmgate and the last in Darus Salam — to assess air quality.

On some days, the pollution level of Dhaka city and its neighboring Narayanganj and Gazipur was up to 300 in the air quality index (AQI) meaning the air was extremely unhealthy.

But how alarming is the situation?

Renowned peer-reviewed journal The Lancet published a report in 2017 which stated that the highest number of deaths associated with air pollution took place in Dhaka.

Environment Minister Shahab Uddin came up with the announcement while talking to journalists at his ministry office this afternoon, according to a press release of the ministry.

Effective measures will be taken to stop the usage of hydraulic horns to check noise pollution, the minister said.

The minister, in the press release, said the decision was an outcome of the meeting to take appropriate measures to prevent air and sound pollution in Dhaka.

The authority will also trace the sources of the unwanted and unnecessary sounds in the capital to make the effort a success, he added.