A look at what's ahead in the World Cup 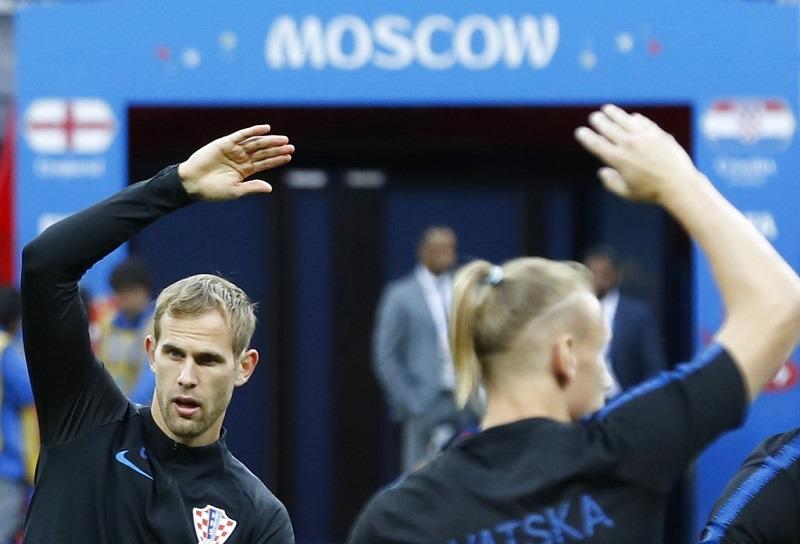 Croatia's Ivan Strinic (left) and Croatia's Domagoj Vida stretch during a training session at Luzhniki Stadium on the eve of the semifinal match between Croatia and England at the 2018 soccer World Cup in Moscow, Russia, July 10, 2018. (REBECCA BLACKWELL / AP PHOTO)

MOSCOW - A look at what's coming up at the World Cup:

It has been two decades since Croatia last played in the World Cup semifinals, and 28 years since England made the final four.

Croatia has never advanced to the championship match. The wait for England to reach a second final dates back to 1966, when it won the World Cup for the only time.

The victor in Wednesday's semifinal match at the Luzhniki Stadium in Moscow will return there for a final on Sunday against France, which beat Belgium 1-0 in St. Petersburg on Tuesday.

England has four wins, two losses and a draw in games against Croatia dating back to 1996. The teams have not met since qualifying for the 2010 World Cup, when England won 4-1 in Zagreb and 5-1 at Wembley Stadium.

IS IT COMING HOME?

England fans are confident they are closer than ever to regaining the World Cup. 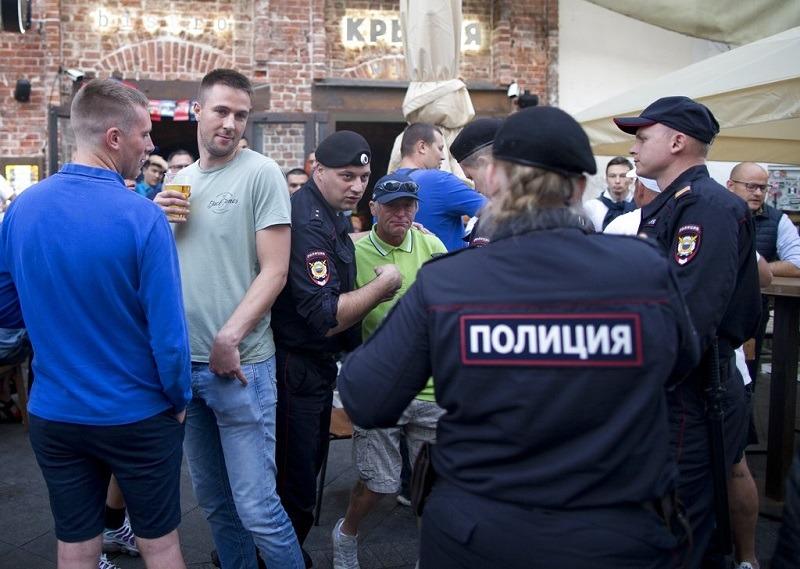 Russian police officers ask England soccer fans to remove their banners from a historical building of the Russian State University for the Humanities in Nikolskaya street near the Kremlin in Moscow, Russia, July 10, 2018. (ALEXANDER ZEMLIANICHENKO / AP PHOTO)

The Lightning Seeds "Three Lions," England's official song when it hosted the 1996 European Championship, with its repeated chorus of "football's coming home" has hit No. 5 this week on YouTube UK's top music videos charts with more than 2 million views on the day of England's last match.

England coach Gareth Southgate missed a penalty kick in the semifinals of that tournament in 1996 and said he couldn't listen to the song for 20 years.

He's ready to face the music now and says "it's nice to hear people enjoying it again."

While England eased through the quarterfinals with a 2-0 win over Sweden, Croatia was forced into a penalty shootout against Russia after finishing extra time at 2-2. That made it back-to-back shootouts for Croatia following its narrow win over Denmark in the round of 16. 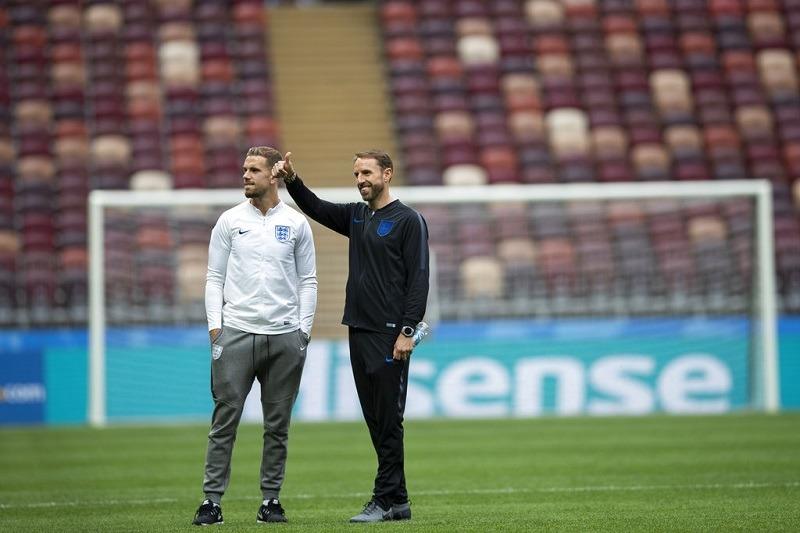 England head coach Gareth Southgate (right) gestures next to player Jordan Henderson as they walk along the pitch after England's official news conference on the eve of the semifinal match between England and Croatia at the 2018 soccer World Cup in the Luzhniki stadium in Moscow, Russia, July 10, 2018.(FRANCISCO SECO / AP PHOTO)

Goalkeeper Danijel Subasic had a hamstring injury during extra time against Russia but remained in the match and played his role when the game went to penalties. Right back Sime Vrsaljko limped off during extra time but Croatia coach Zlatko Dalic has described the injury as a "niggle."

Dalic said he isn't concerned about his Croatia squad running out of steam.

"Of course there's power left for the English," Dalic said. "We don't want to stop. We want to play our best game."

It has been a rocky road off the field, too, for Croatia. Team official and former international Ognjen Vukojevic was expelled from the delegation for making a pro-Ukraine video with defender Domagoj Vida. The pair previously played for Ukrainian club Dynamo Kiev.

Vukojevic was fined US$15,150 by FIFA but Vida was let off with an official warning after apologizing for the video, which was posted after the team beat Russia. That leaves him free to play against England.

The French players danced on the field after their victory but toned it down slightly to shake hands with Thierry Henry, who helped Les Bleus win the World Cup in 1998 and is now Belgium's assistant coach. 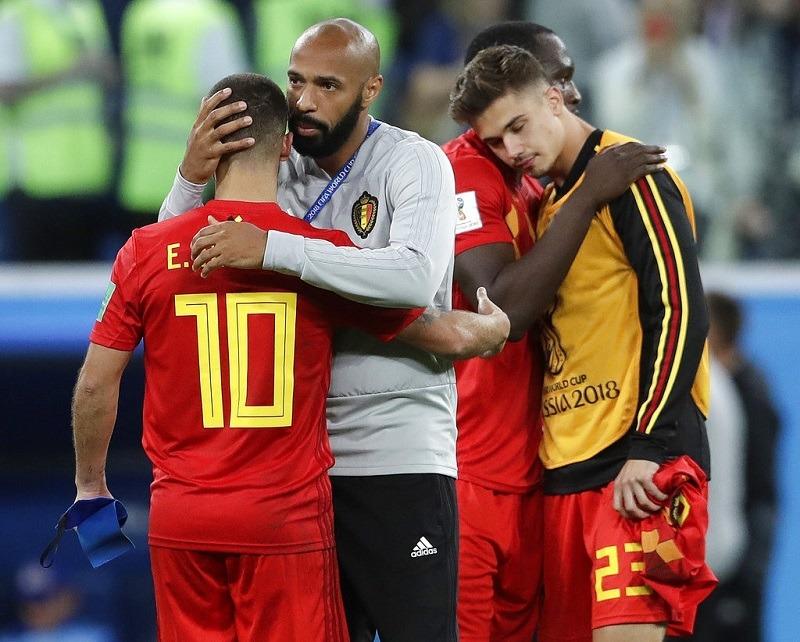 Henry did everything he could to help Belgium bring down France, but ultimately the team with more goals than any in the tournament was unable to score in the semifinals.

France's all-time leading scorer will finish off his World Cup gig with Belgium in the playoff for third place in St. Petersburg on Saturday. Then, no doubt, he'll be supporting the French pursuit of a second World Cup title the following day in Moscow.

Didier Deschamps won the World Cup as a player in 1998, and is now one win away from winning as coach. That's something only Franz Beckenbauer (Germany) and Mario Zagallo (Brazil) have done. 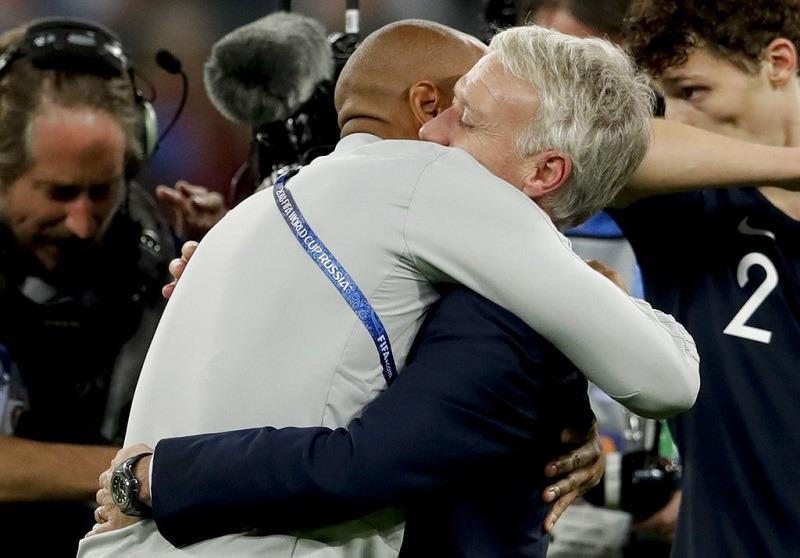 After praising his players for their performances in reaching the final, Deschamps was asked about his own contribution.

"I'm not going to be too humble, either," he said. "I have responsibility for the team. Of course I have an important role on a daily basis, but the credit goes to my players. But it's a pure pleasure to see these players grow, and never give up."

Fans celebrated the victory all over France, with fireworks and flares lighting up the sky above Paris and Marseille.

"I've seen the images of Paris. It brings back a lot of good memories. The most important awaits us on Sunday," Deschamps said. "We're immensely privileged to be in the World Cup final. We have to savor it."